You may also like
Dismiss
The Grill by Thomas Keller on Seabourn Cruise Line (Plus Menu)
Holland America vs. Viking
Rudi's Sel de Mer on Holland America Cruises (Plus Menu)
7 Things You'll Love About Sky Princess
Cruise Vision 2020: The Future of Cruising in Australia and New Zealand
Pictures of Sky Princess
The Most Exciting Ship Launches in 2020
Things to Do in Singapore Before a Cruise
6 Best Majestic Princess Cruise Tips
Best Cruise Cookbooks 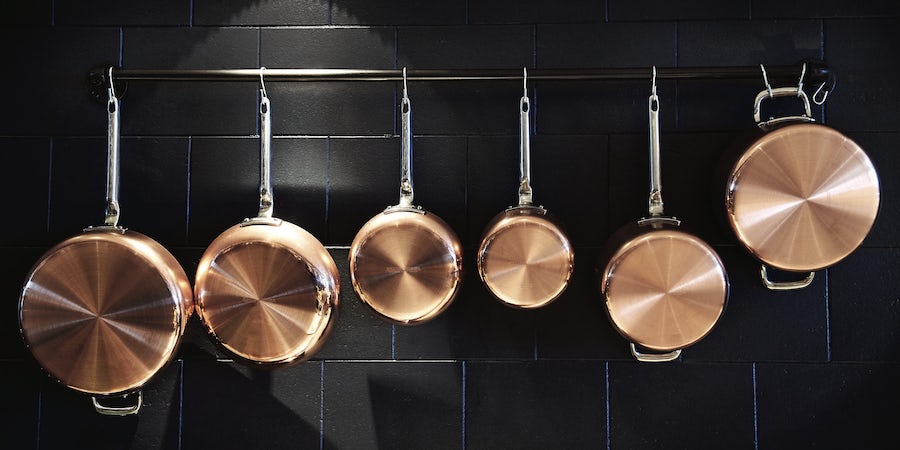 Meet the Chefs on Princess Cruises

Six celebrity chefs are turning up the heat on Princess Cruises' dining options for Australians and New Zealanders. From Michelin-starred maestros to chocolate experts, the line has scored several coups in cuisine at sea.

Only four chefs affiliated with the cruise industry have been awarded the title of Master Chef of France by the esteemed culinary organisation, L 'Association des Maitres Cuisiniers de France. Princess Cruises is home to two of them: Emmanuel Renaut, who created the new French bistro, La Mer, on Majestic Princess; and Pierre-Marie Leprince, director of guest culinary experience, are the latest recipients of the prestigious designation.

French is just one of many cuisines now featured onboard Princess ships. Here is an entree of what the line's six top chefs are serving up this season. 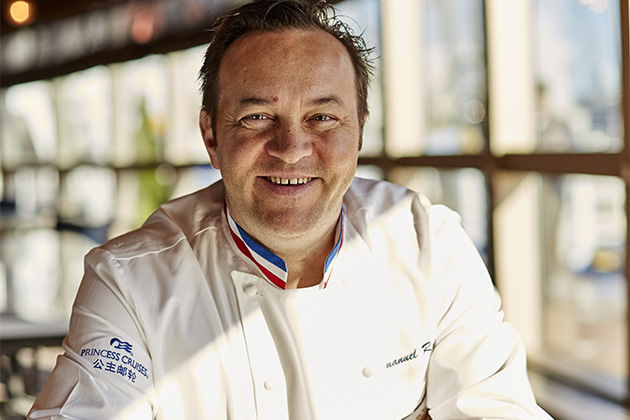 Three-Michelin star chef Emmanuel Renaut began his career cooking in some of the finest kitchens in Paris and London, including Hotel de Crillon, Claridge's and Auberge de l'Eridan. He is now the acclaimed executive chef of Flocons de Sel, which has been awarded three Michelin stars, and the more casual Flocons Bistrot and Chalet Le Forestier, all of which can be found in the French Alps.

Why dine here? You can try Michelin star-worthy dishes from Flocons Bistrot without flying to France.

Cost: AU$35 per person for a four-course dinner. Additional main dishes are available for AU$15 each. Lunch is AU$12. 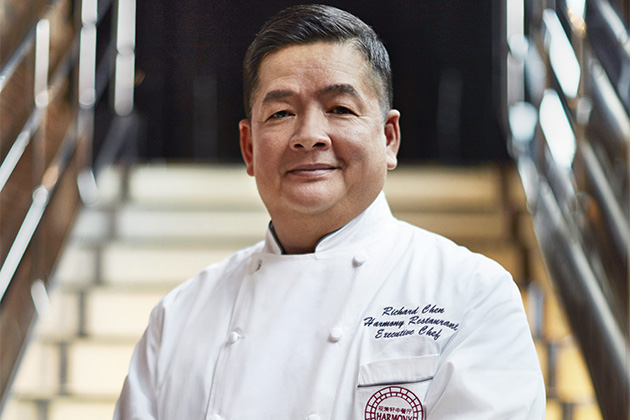 Dubbed the 'duck master' in honour of his delectable duck dishes, Richard Chen has earned critical acclaim for his signature 'reverse fusion' cooking, which uses Western ingredients and techniques to prepare traditional Chinese cuisine. Chen was awarded a Michelin star for his restaurant Wing Lei, the only Chinese restaurant in North America to receive this honour.

If you have never ventured beyond sweet and sour pork or combination fried rice, you're in for a treat with Chen's cruise ship fine diner. He created Harmony for Princess Cruises, an elegant restaurant that pairs classic Cantonese dishes with modern decor and ocean views. Dishes include lightly crisped chicken served with water chestnuts and ginger soy glaze, wok-fried kung pao chicken and Peking duck salad with truffle oil vinaigrette, plus a few more adventurous options such as marinated chilled jellyfish.

Why dine here? It's the first time a fine dining Chinese restaurant has been available on a ship in Australia.

Related: Ovation of the Seas: Designed for China

Cost: AU$29 per person for a five-course lunch or dinner. Some specialty dishes, such as lobster, cost an extra AU$12 each. 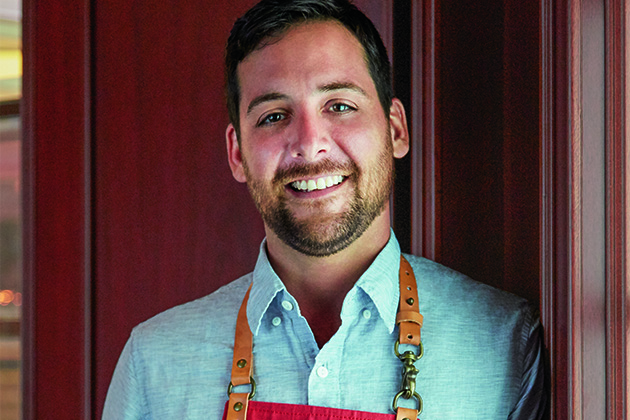 Ernesto Uchimura grew up surrounded by traditional foods from his mixed Americas, Asia and Europe heritage, which sparked an interest in the world of gastronomy. After studying the culinary arts in New York, he found his niche creating innovative comfort food.

Awards soon followed including 'Chef of the Year: The Comfort Master' from Los Angeles magazine, 'Best New Dish' for his smoky fried chicken from Angeleno Magazine, 'Best Sandwich in America: Chicken' by Restaurant Hospitality, and 'Best Burger' in Los Angeles by LA Weekly.

Why dine here? You enjoy pub grub but want to treat yourself to something special.

Cost: AU$12 per person for a choice of two gourmet plates and a dessert. Breadsticks served with beer-cheddar fondue and flaked smoked salt are complimentary. 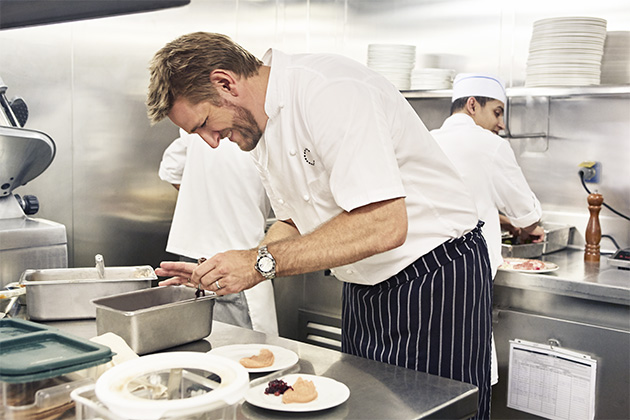 Share By Curtis Stone is a six-course fine-dining experience that was created by the celebrity chef for Princess Cruises. With 90 per cent of the line's onboard produce sourced locally, the restaurant has a focus on fresh, local flavours and supporting farmers and regional suppliers. Dishes include a charcuterie or Pantaleo cheese as a starter; a choice of three salads, including tomato and burrata or lemon-poached prawn; ricotta cavatelli or pork ravioli as pastas; lobster tail, scallops or trout for the 'surf' course; duck leg confit, striploin steak or mushroom ragout for the 'turf' course; and a choice of desserts such as dark chocolate hazelnut custard, citron tarts and toffee cheesecake. There's also a vegetarian menu.

Why dine here? With a choice of up to four dishes for each course, this degustation dining experience caters for every taste, and includes a tailored selection for vegetarians.

Cost: AU$39 per person for a six-course dinner. 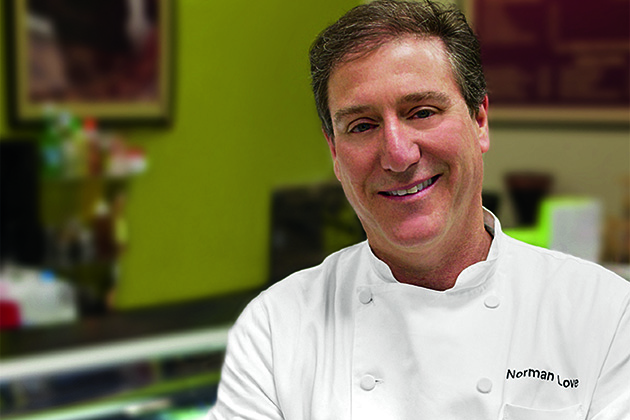 Norman Love was always drawn to the sweet life, starting his culinary career at age 15 as an ice cream maker while he was still at high school. Love went on to serve as executive pastry chef for Ritz-Carlton for 13 years, honing his skills in places such as Dubai, Barcelona and Egypt, before leaving to open one of the United States' top chocolate shops.

Love's sweet creations are gourmet works of art, combining unique flavours with premium chocolate that is shaped into artistic and creative designs. Some might say they're almost too pretty to eat, but don't let that stop you. In 2014, Love created Norman Love Chocolate Journeys for Princess Cruises -- a selection of decadent chocolate-themed treats and activities.

Join a wine-tasting with chocolate pairings or sink your spoon into chocolate tiramisu with mascarpone cream and espresso gelato, or a milk chocolate peanut butter bar. If you want to keep the Love coming after your cruise, boxes of colourful chocolates can be purchased onboard to take home (provided you can resist the temptation to eat them before you leave the ship).

Cost: Desserts are free at the buffet and main dining room or in specialty restaurants as part of the cover charge. Signature chocolates start at AU$13.25 for a five-piece box. A chocolate and wine pairing, offered on select days, is AU$25. A chocolate spa treatment costs AU$195.

Available on: Every ship in the fleet. 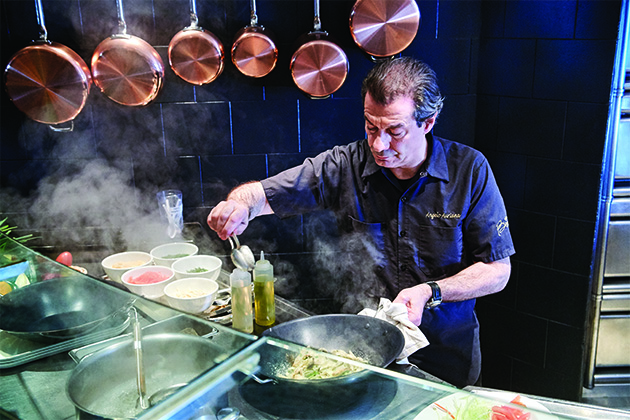 Known for his innovative use of seasonal produce combined with traditional cooking techniques, Angelo Auriana is passionate about northern Italian cuisine. Graduating from the San Pellegrino Hotel School with honours at age 17, it wasn't long before Auriana opened his first restaurant. After establishing himself in Italy, he moved to the United States in the mid-80s to introduce Americans to the Italian cuisine from the region where he grew up.

Auriana has received a diploma from the mayor of his hometown, recognising the impact of his culinary pursuits in the United States, and how he has helped share Bergamo's culture and traditions through his food. This region also provides inspiration at Auriana's three land-based restaurants -- The Factory Kitchen, Officine BRERA and sixth+mill -- which can be found in Los Angeles' hip Arts District.

Why dine here: Sabatini's is the ultimate crowd pleaser, with a mix of dishes aimed at more conservative diners and enough twists to keep foodies entertained.

Cost: AU$25 per person, which includes an appetizer, soup or salad, pasta, entrée and dessert. Additional pasta and entree courses are available for an extra AU$10 each.