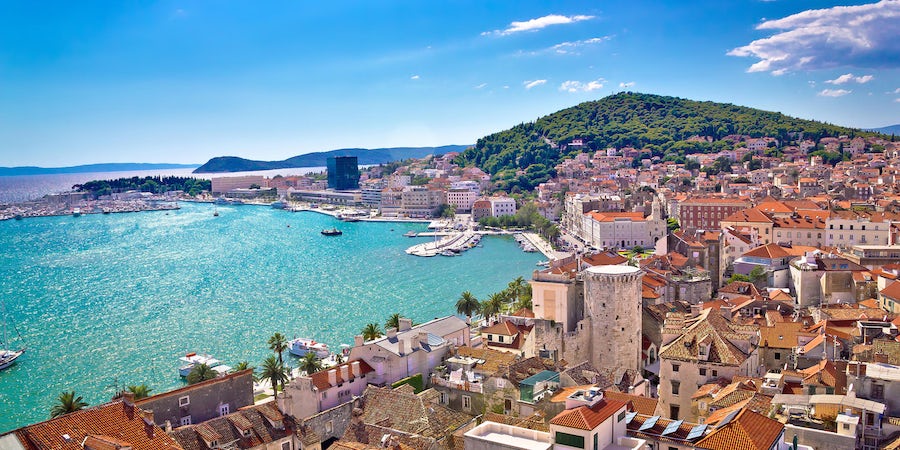 Named for an ancient tribe that lived along the eastern coastline of the Adriatic Sea in the first millennium BCE, the Dalmatian Coast is best known as the place the white and black spotted dog came from. But with a history that dates back to a time before the Greeks and includes long sweeps of time under the rule of various empires (Roman, Byzantine, Venetian, Yugoslavian), there's so much to learn about and see in any of the cities and towns that dot the area's islands and coastline.

The Dalmatian Coast stretches southeast from Italy's Venice (rulers from here used to oversee this part of the world), encompassing Croatia and parts of Slovenia, Bosnia and Herzegovina, and Montenegro. The ports are often visited as part of Eastern Mediterranean itineraries (although it's technically on the Adriatic Sea), as well as by small ship cruise lines that stop at smaller cities and towns exclusively along the coastline.

Whether you sail an itinerary that sticks exclusively to the Dalmatian Coast or a Mediterranean journey that stops at select ports on the way to elsewhere, you'll visit towns with quaint old city centers, narrow stone streets, medieval fortified walls, cathedrals that span hundreds of years and subtle signs of the war that raged through this area in the mid-1990s. With excursions on offer that range from classic city tours and culinary tastings to hikes or kayak trips through pristine natural environments, a cruise along the Dalmatian Coast offers a rich experience to history buffs, foodies, active travelers and anyone who simply wants to explored a less-traveled path.

The Eastern Mediterranean cruise season generally runs from May to late October or early November, but the itineraries that stick primarily to the Dalmatian Coast of the Adriatic tend to sail from May to September. For the most comfortable temperatures and smaller crowds, you'll want to go in May, June, September, and, when available, October. July and August can be quite hot and the crowds in cities like Venice (where most Dalmatian Cruise itineraries start) and Dubrovnik are at their thickest.

There are 10 cruise lines (all small ship) that offer specifically Dalmatian Coast cruise itineraries, and another 12 (of all sizes) that stop in cities along the coast as part of larger Eastern Mediterranean sailings that go to many other places as well.

Azamara, Crystal, Grand Circle, Ponant, Sea Cloud, Star Clippers, Vantage and Variety Cruises all sail itineraries that begin or end in Italy (Vantage's cruises actually start and end in Croatian cities) and stop at several ports, mostly in Croatia and Montenegro, up and down the Dalmatian coastline. Tauck offers occasional full and partial charters on Ponant ships. Emerald Waterways will offer Croatia-intensive small-ship sailings on one ship in 2019 and two ships in 2020.

There are nearly as many itinerary choices along the Dalmatian Coast as there are ports; a handful stick mostly to Croatia and Montenegro; others include stops in Italy, Slovenia, Albania, and might even offer a bus excursion to Bosnia and Herzegovina, as well as ports further afield in the Adriatic Sea to Greece. Sailings range from seven nights all the way up to 20-plus nights for cruises that go well beyond the Adriatic.

Most itineraries that mainly run along the Adriatic Coast typically start and end in Venice, though there are sailings that start or end in Dubrovnik, Athens, Trieste, and, on Grand Circle, which combines a land-tour with its Adriatic cruises, in Zagreb, Croatia's inland capital.

There is no one standard Dalmatian Coast itinerary; but sailings marketed as Dalmatian will typically have some mix of the following ports: Hvar, Dubrovnik, Zadar, Sibenik, Korcula, Split and Trogir in Croatia; Kotor in Montenegro; and Koper in Slovenia. Other ports that might be on a specifically Dalmatian Coast sailing are Rovinj, Vis and Pula.

The Azamara sailing visits Zadar, Sibenik, Hvar, Dubrovnik and Kotor. The Ponant sailing (which is sometimes chartered by Tauck) goes to Korcula, Split, Sibenik, Dubrovnik, Kotor, Hvar, Pula and Rovinj. The Crystal sailing visits Rovinj, Sibenik, Trogir, Vis, Hvar, Korcula and Dubrovnik. The Variety sailing stops in Korcula, Hvar, Split, Sibenik, Rab, Kotor and Trogir. The Star Clipper is the most unusual of the Dalmatian Coast itineraries with stops in Korcula and Mali Losinj in Croatia, Durres in Albania, Kotor in Montenegro, and Piran in Slovenia.

Dubrovnik: Dubrovnik's Old City is one of the most completely intact medieval-era cities in Europe and has historically been best known for its intact city walls (which you can walk along the top of), which date back to the 12th to 17th centuries. Known as the "Pearl of the Adriatic," Dubrovnik is easily walkable (no car traffic is permitted inside). Go for the walls, as well as Baroque and Renaissance buildings, plus narrow streets that climb steeply up the city's sloped periphery.

Kotor: Located at the end of the 17-mile Bay of Kotor, the entrance to this Montenegrin city is perhaps more spectacular than the city itself. It takes nearly an hour to glide through the fjord-like waterway (it's not technically a fjord), with mountains rising on either side of you. Like Dubrovnik, Kotor is also a walled city though not all of its walls remain, but you can walk on them if you're up for quite a strenuous trek. Inside the Old City are a collection of medieval churches, squares and narrow streets that date back to the 12th to 15th centuries.

Koper: Claiming to be Slovenia's oldest town, relics found in Koper date its origins back to the Middle Bronze Age. It's located on the Istrian peninsula, all of which was once owned by the Venetian Empire so it feels more Italian than Slovenian. As with most of the cities along this part of the Adriatic Coast, the Old City is where you'll find most of the charm, including its main square and 15th- and 16th-century palaces, churches and homes.

Split: Split is the busiest city along the Dalmatian Coast that you are likely to visit (it's the second largest city in Croatia) and after so much time spent in small towns and places where no cars are permitted, it can feel suddenly overwhelming. But don't let that stop you from venturing out, especially to see the Palace of Diocletian. The vast spaces take up 10 acres and rather than serve as a dusty museum is a lived-in thriving community with apartments, restaurants, bars and even hotels. You'll want to take a tour so they can point out how it was all used during Roman times.

Rovinj: A pleasant seaside town, Rovinj is among several towns located along a section of the Dalmatian Coast that is being called the Adriatic Riviera. Yachts and sailboats dot the harbor here; walk a little ways out of town and you'll start to find resorts and beaches. Rovinj, which like Koper in Slovenia is located on the Istrian peninsula, feels Italian and you'll see Italian language signs and restaurants throughout the city. It's also an artist colony and there are ceramic, jewelry and painting workshops and stores in every little winding alley. And, of course, you'll find a Medieval-era Old City in the central part of the town.

Zadar: Other than its charming Old City, Zadar's main claim to fame is the unique sea organ that plays music based on the movement of the wind and the waves. Located near the cruise ship dock, the organ, which doubles as a wide stone staircase where you can sit and listen, was designed by architect Nikola Basic and opened in April 2005. It's got 35 pipes of different lengths and sizes connected to whistles that play seven chords of five tones as the sea pushes air through the pipes. It's a unique attraction that you'll find along the Dalmatian Coast.

Sibenik: Cruise ships stop here mainly to disembark passengers headed to Krka National Park, although the city itself has a few attractions to see (a 15th-century cathedral and fortress, among them). But it's Krka that draws people, with its massive waterfalls and scenic hikes along the Krka river. There's a spot to go swimming, wooden walkways that run through a pretty forest and a small ethno village with three recreated workshops (kitchen, blacksmith and weaving).

Bring water and a hat: The Dalmatian Coast can get pretty hot starting in May and going through to September and you'll often find yourself without a source of shade on city walks. Bring a hat to protect your head and make sure to have plenty of water on you. This is especially important if you're going to do anything strenuous like climbing the walls in Dubrovnik.

Don't forget the kuna: While Croatia is in the European Union it is not yet on the euro; the local currency is the kuna and you'll need kunas if you're paying in cash at most places. The most touristic might accept euros, but many restaurants and small shops will not. Slovenia and Montenegro, on the other hand, do use the euro.

Keep tendering in mind: Many of the ports along the Dalmatian Coast require tendering, making it more difficult for people with mobility issues; this includes Dubrovnik, the most common of all the Dalmatian Coast ports, which has only one dock for a small- to mid-sized ship. All other ships visiting on the same day will have to anchor and tender passengers back and forth.

Related: Docked vs. Tendered: Two Ways to Get Ashore

Don't skip the tastings: All of the Mediterranean is steeped in rich culinary traditions and the scent and taste of olive and truffle oils, figs, capers and lavender are omnipresent. Don't skip any opportunity to take a taste of the local specialties made from these ingredients.