You may also like
Dismiss
5 Best Celebrity Equinox Cruise Tips
MSC Meraviglia vs. Harmony of the Seas
Meraviglia Class vs. Seaside Class on MSC Cruises
Q&A with a Cruise Ship Entertainment Director
8 Things You'll Love About Celebrity Edge
5 Things You'll Love About Holland America's Nieuw Statendam Cruise Ship
Planning a Group Shore Excursion for Your Cruise
7 Easy Things You Can Do to Help the Environment When You Cruise
9 Free Things to Do on Norwegian Encore
Pictures of Norwegian Encore 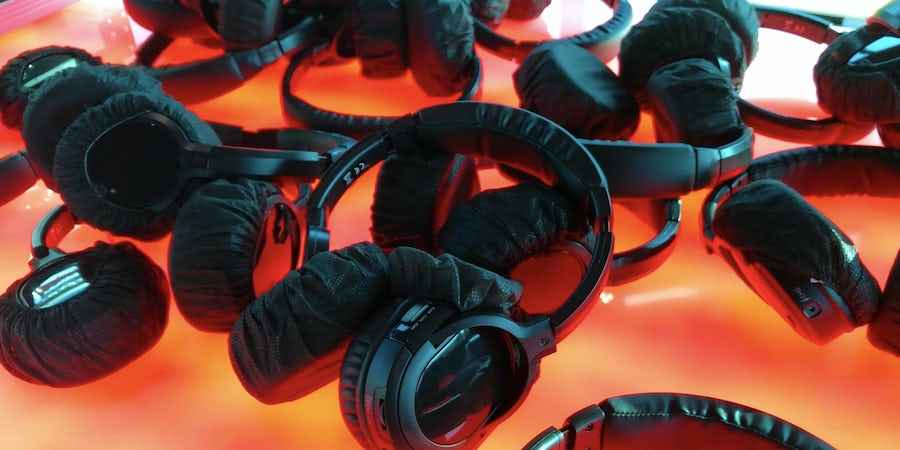 Silent Disco on U by Uniworld's The A (Photo: Christina Janansky)

What Is a Silent Disco on a Cruise?

You might see "silent disco" listed as an activity on your cruise program and wonder, "Well how exactly does that work?" Wonder no more. Cruise Critic is demystifying this increasingly popular cruise ship party so you can know what to expect from your next onboard silent disco.

What Is a Silent Disco and How Does it Work?

A silent disco -- known by a few names, including "hush party" -- is a dance party where all participants wear headphones (hence, the room is silent). The headphones are handed out as you enter the space, or located on a table just outside. A DJ is standing by to manage not one, but typically up to four different playlists. The headphones have a switch, and silent disco dancers are able to choose the station they want to hear.

Expect a blend of oldies, popular and techno dance music, Latin tunes and maybe a "chill" station. Each station correlates to a color that appears on the outside of the headphones, so fellow participants can see which genre you've chosen.

The fun begins when a song like "YMCA" comes on and suddenly there are arms flailing overhead, and you can see your fellow cruisers mouthing the lyrics. Suddenly, everyone has changed over to that channel, and the room will be a sea of glowing red headphones, as the crowd jumps around and sings along. What's even funnier is briefly taking off your headphones and listening to everyone belting out their best version of the Village People without inhibitions -- and without background music to smooth out some rough voices.

Seeing the various dancing styles and rhythms blending together in one club is more fun than you would think it would be. The ability to switch to several stations means there is plenty of musical variety; it's hard to get bored of this dance party. Even better, these parties are usually included cruise ship activities with no cover charge.

Where Can I Find a Silent Disco at Sea?

Silent discos are usually held in a nightclub venue, but can also be found in a ship atrium or even in a solarium -- the setup is flexible, so it depends on your cruise line and sailing. More cruise lines are beginning to feature this fun and inviting shindig, including Celebrity Cruises, Royal Caribbean and Disney Cruise Line.

Trendy river cruise line U By Uniworld incorporates a silent disco into a top-deck space called the Ice Bar. Passengers can let loose in their own private club docked overnight in the middle of a city like Paris or Frankfurt, or they can simply switch to an ambient station and snuggle up on a sun lounger with a nightcap.