You may also like
Dismiss
The 17 Best Free Things to Do on a Cruise
Princess Cruises vs. Royal Caribbean International
Virtual Reality Experience on a TUI Discovery Cruise
5 Mind-Blowing New Cruise Attractions of 2018
Galaxy Pavilion on Norwegian Cruise Line
The Most Exciting Ship Launches in 2020
New Cruise Ships 2020
Sky Zone on Carnival Cruise Line
Photos of Royal Caribbean's Odyssey of the Seas Cruise Ship, Before its 2021 Debut
18 Adventure Activities You Didn't Know You Could Do on a Cruise Ship 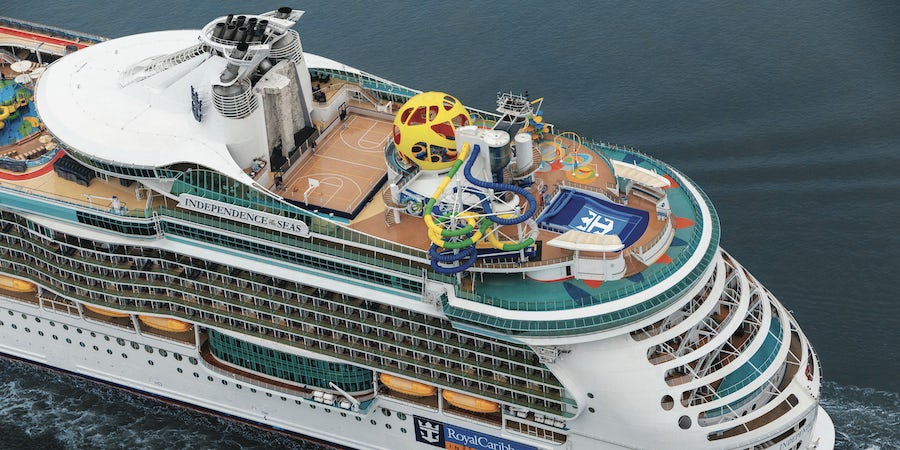 Royal Caribbean has a thing for anti-gravity. Whether the line has you defying the force on its FlowRider surf simulators or completely kicking it to the curb with its RipCord by iFly, Royal Caribbean loves to pit its passengers against gravity. And its newest thrill attraction, Sky Pad is no different. As with FlowRider and RipCord, you can't miss Sky Pad at the top of any ship it's on.

Located inside a large yellow sphere, which sits on the ship's top deck, Sky Pad might, at first, be mistaken for some fancy new radar system. But rather than antennae, inside are four trampolines, all rigged up to a combo of bungee cords and virtual reality. (It's worth noting that the bungee aspect refers to the type of ropes used, allowing for extra lift -- not bungee jumping off the side of the ship). Once inside, participants bounce up and down on the trampolines with the aid of the bungee cords, all while exploring virtual reality worlds thanks to the VR headsets they're wearing.

Interesting side note: Sky Pad was crowd-sourced from a suggestion by the U.K. travel trade to put trampolines onboard; Royal Caribbean was not content with just trampolines so added a bungee element and virtual reality.

On Independence of the Seas, Sky Pad is located right at the top of the ship and you have to climb a set of steps to reach the entrance. Once there you are given a briefing about what to expect -- partly to allay any fears you might have and also to allow you to think about what type of VR experience you might like. There are (currently) three landscape options to choose from: a pop video, a Candy Crush saga and shooting aliens in a post-nuclear cityscape. Each last around two-and-a-half minutes.

Once you've chosen your VR experience, you'll need to take your shoes off and kneel on the side of the trampoline as you are strapped into a bungee-style harness.

We opted first for the pop video, put on the VR headset and began. It's similar to being inside a video game -- and if you've seen the Spielberg movie "Ready Player One," it's very much like that in terms of looks and feel (or "Tron," for older readers). As you bounce, you leap onto things -- podiums and walkways -- which allow you to "walk" through the virtual world. In the pop video, dancers, singers and bands are your landscape, with a loud EDM soundtrack. There's not much to do but look around (and bounce of course); this experience is less about interacting and more about observing.

We next chose to shoot aliens with our eyes, but what's odd about this is that the trampoline element seemed redundant as you stay in the exact same place for the duration of the experience. The aim is to lock on with your eyes to incoming lasers, shells and whatever else the aliens are hurling at you to blow them up before they hit you. This one is scored against previous players and we came in 22nd.

We didn't get a chance to try the Candy Crush version.

Absolutely. Not only is it free, it's also a lot of fun and we predict this will be a definite hit and a huge draw for kids.

If you are partial to motion sickness or have just eaten -- do not try this, although if you start to feel ill at any time you can just stop and pull off your headset. It's open to anyone over 5 years olf (jumping only) while 7-year-olds and above can wear the VR headset. Note, there is also a lower (20 lbs.) and upper (240 lbs.) weight limit.