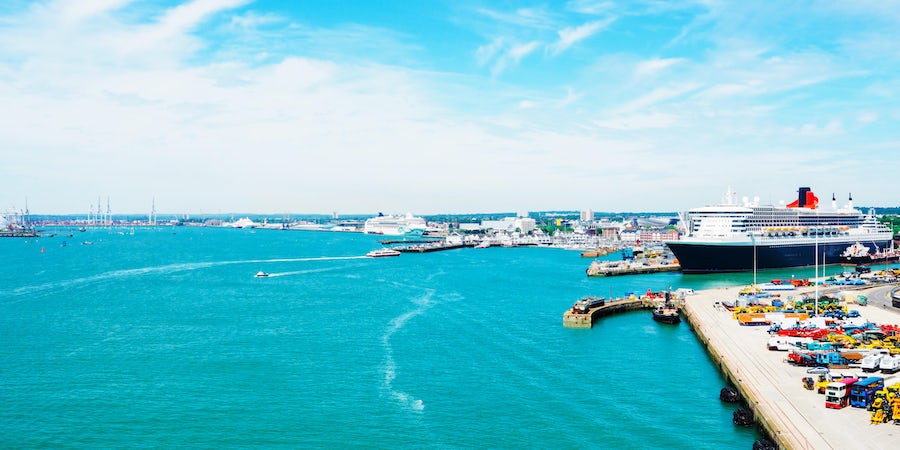 Southampton is the cruise capital of Northern Europe, with two million passengers passing through it on average every year. The city has four large terminals which are all busy year-round serving several major cruise lines including P&O Cruises, Princess, Cunard, Royal Caribbean, Celebrity, MSC Cruises and Fred Olsen. Cruise Lines. Two of the terminals (City and Ocean) are within walking distance of the city centre, whilst the other two are a five-minute taxi ride away.

Related: 7 Reasons Why Brits Will Love a Round-Britain Cruise

Voyages from here range from round-the-world itineraries to British Isles cruises, to those sailing up to the Norwegian fjords or the Baltic, or across the Bay of Biscay via France, Spain and Portugal to the Med and beyond. Southampton has a rich maritime history -- it was from this very port that Titanic began its fateful voyage on April 10, 1912. Today cruisers can still make that iconic transatlantic crossing from here to New York and vice versa on Cunard's Queen Mary 2.

Whilst most cruises tend to start or finish (or both) in Southampton, many ships also dock here for the day as a port of call.

Getting There by Car

Here are directions for driving to the Southampton cruise terminals:

From the North, East and London Regions

Option Two (For Ocean and QE11 Cruise Terminals only)

From the A31 Poole & Bournemouth areas follow the road through the New Forest to join the M27. Leave the M27 at junction 3 and at the roundabout take the 3rd exit signed M271 toward Southampton/The Docks. At the next roundabout (Redbridge) take the 1st exit onto the A33 which will lead you along a dual carriageway heading into Southampton to the relevant Dock Gate assigned for your cruise.

Getting to Southampton Cruise Port From the Airport

Whilst there is a Southampton International Airport which serves many UK and Europe destinations with onward connections worldwide, the majority of international passengers on cruises departing from Southampton fly into London's two major airports: Heathrow or Gatwick. Neither of these airports is particularly close. Heathrow is 70 miles from Southampton (approximately an hour and a half drive) and at 90 miles away, Gatwick is an even longer, a two-hour drive.

There are no direct, shared van shuttle style services available and whilst you could theoretically rent a car at either Heathrow or Gatwick -- several Southampton hotels offer 'cruise & stay' parking packages -- it's far easier to use one of the below options to get from the airport to Southampton.

Alternatively you can usually prearrange a transfer from the airport to your ship through your cruise line, travel agent or Southampton hotel.

Taxis are readily available at Southampton International Airport and the cost of a ride from here to the port is about the equivalent of $22.00.

Taxis are readily available at Heathrow and Gatwick Airports too, but as they are both such a distance away it's far cheaper to pre-book a taxi beforehand. West Quay Cars (westquaycars.com/) is one of Southampton's largest taxi services. From Heathrow to Southampton costs roughly $134.00 (more expensive for an MPV) and from Gatwick it's about $155.00.

Uber is available. A fare estimate from Southampton International Airport to the cruise port is about $17. From Heathrow it's from about $127.00 and from Gatwick it's roughly $14 more.

There's no one bus or train that will take you directly from any of the airports to the cruise terminals. From Southampton International Airport there's a direct 7-minute train to Southampton Central station. From here there's a public bus (U1) to Dock Gate 4.  For security reasons ALL passengers must alight at the Dock Gate 4 bus stop and walk the remaining distance to their cruise terminal. If you've got a lot of luggage and don't fancy walking then it's far simpler to hop in one of the taxis outside Southampton Central Train Station -- from here to the port costs about $8 and takes about five minutes.

The cheapest public transport option from Heathrow or Gatwick is to take a direct, scheduled National Express bus to Southampton: https://www.nationalexpress.com/en

The journey time isn't quick, however. From Heathrow to Southampton takes about 2 hours and costs around $31. From Gatwick it's about 3 hours and costs about the same. Be aware that the National Express bus terminus is in the centre of Southampton, however, and not at the port itself.

Rental Car Services in Southampton Near the Cruise Port

There are no rental facilities in the terminals themselves, but Hertz, Europcar and Enterprise all have offices in Southampton. You can pre-book a car with any of them and the rental vehicle and key will be left in a safe place at the cruise terminal for you. It's easy, straightforward and cruisers regularly use this service.

Parking is available for passengers traveling from all four terminals. To guarantee your spot it's advisable to pre-book in advance, especially during the busy summer months from July -- September when, due to high levels of booking, facilities do sell out on occasion.

The car parking service on offer for each cruise will depend on your cruise line operator and your departure and arrival terminal -- the longer the cruise, the cheaper the daily parking rate.

For passengers travelling with Royal Caribbean, Celebrity, Norwegian Cruise Lines, MSC and Marella Cruises there's self-parking available right next to City Cruise Terminal (less than a minute walk away) which costs about $100 for a 7-night cruise and $170 for 14-nights: https://www.abparking.co.uk/

For Fred. Olsen and Saga passengers the AB Parking service is a 'meet and greet' one. This involves driving up to the terminal where your car keys will be taken off you. At the end of the cruise you'll be met onboard your ship where your keys will be handed back to you prior to disembarkation. This costs about $127 for a 7-night cruise and $198 for 14-nights.

Parking for Princess, Cunard and P&O Cruises' passengers is run by CPS Cruise and Passenger Services: https://www.cruiseparking.co.uk/. They offer a valet-parking service, allowing you to drop off your car at the terminal and pick it up from their car park which is a 200m walk away. The cost for this is around $134 for 7-nights and $198 for 12-nights.

Whilst AB Parking and CPS are the two main parking providers, there are other independent operators. For more information visit:

Porters are available to help passengers with luggage on embarkation and debarkation days at all four of Southampton's cruise terminals. Tipping is at your discretion.

Be sure to check your paperwork to make sure you are going to the correct terminal and always defer to your cruise line's instructions for when to arrive to board your cruise. The port of Southampton recommends sticking to the time your travel agent or cruise operator suggests, as it can get quite busy.

All cruise lines provide wheelchair assistance at all four terminals free of charge. Look for signs saying 'Assisted Boarding' and staff wearing orange tabards with 'Mobility Assistance' written on their backs. They will take escort you in a wheelchair all the way from check-in through security and onto the ship.

Where to Eat or Shop Near Southampton Cruise Terminals

City Cruise Terminal is the only one of the four terminals which is in easy walking distance of shops and eateries. It's roughly a five-minute stroll from Oxford Street where snacks, toiletries and light grocery items are available and there are several nice restaurants here too.

Otherwise all four terminals provide complimentary water and magazines. All also have a fully licensed bar serving hot and cold food and drink as well as a café serving snacks and refreshments. There are also a couple of vending machines and souvenirs (T-shirts, mugs and fridge magnets) to buy, but little else.

There are no ATM machines or payphones in any of the cruise terminals.

All cruise terminals provide ample seating for passengers in the embarkation/ticketing halls. City Cruise Terminal has about 450 seats; Mayflower Terminal provides seating for about 700 people; Ocean Terminal has approximately 100 chairs in the foyer and 1000 more upstairs in check-in. And the QE11 Terminal (the oldest of the terminals and in need of renovation) has 700 seats.

All four terminals have separate VIP seating areas for suite and premier club passengers, where free drinks and snacks are provided.

There are large bathrooms (on average six stalls for women and four for men) and one disabled access bathroom on each floor of every terminal.

City Terminal is the only one which currently has Wi-Fi (free of charge) although there are plans to roll this out across all four terminals soon.

For security reasons there is no luggage storage available at any of the terminals.

If you're a keen photographer and fancy taking snaps of your ship, a good place to take them from is Mayflower Park, which you'll find on the seafront next to the cruise terminal entrance to the western docks. Better still is Vokes Memorial Park (slightly more inland) which is intentionally raised for this very purpose!

And if you've time to spare and want to soak up some history, have a drink in The Grapes bar on Oxford Street -- a 5-minute walk from City Cruise Terminal. It was in this establishment that crew members from the Titanic came for a glass or two before the ship set sail. Legend has it that some crew members drank so much that they ended up missing the ship's departure, which of course saved their lives.