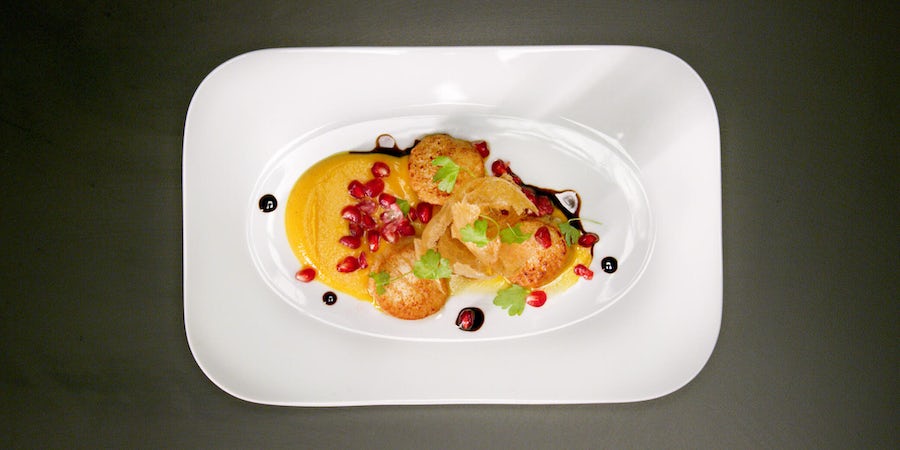 Moveable Feast on Celebrity Cruises is a culinary-themed cruise that combines for-fee and open-to-everyone activities and interactions with the guest chefs that range from intimate cooking classes to grand cooking demonstrations. Additionally, there are meet and greets, photo opportunities and chances to get your cookbook/apron/wooden spoon signed. Plus, one night in the main dining room, the menu features one dish in each course from one of the guest chefs.

Serious foodies will want to nab a spot in one or more of the purchasable, small-group events, both onboard and ashore as these activities are geared toward sharpening your culinary skills and exposing you to local ingredients, dishes and flavors.

On the ship, the focus is cooking and the guest chefs lead cooking classes in the Tuscan Grille galley. Here, between 12 and 18 passengers gather at stations outfitted with the requisite tools (including knives and cut-resistant gloves) and ingredients, and then follow along as the chef leads a hands-on cooking class. Each class is followed by a three-course lunch in Tuscan Grille.

In port, a Moveable Feast excursion will put you ashore with the chef as you shop in a local market, meet with farmers or fishmongers and learn about local ingredients. This is typically followed by a cooking demonstration and tasting where you'll gain more insight into local food culture.

Chefs Bryan Voltaggio and Richard Blais were our culinary hosts, though chefs do vary by sailing. These "Top Chef" veterans displayed their kitchen prowess during their classes and demos, but also allowed their personalities and culinary identities to shine. Chef Blais -- known for playful food and inventive techniques -- led our cooking class in the preparation of a pair of appetizers. The first, a take on sashimi had us dicing fresh tuna, dressing it and wrapping it in sesame leaves; the second was a quirky dish that combined a sushi roll and burrito into the SushiRito. Under Chef Blais' guidance we attempted to properly turn sushi rice, dressed tuna and other ingredients into this elegant (but still fun) dish. Attempted is the key word as most of the class ended up making something that tasted better than it looked.

Under Chef Voltaggio's guidance we prepared a variation on the Italian classic caponata (a Sicilian eggplant dish), updating it to be seasonal by substituting cantaloupe and honeydew for the eggplant, then using that as the base for a pan seared fish dish. As he walked us through the proper cuts and variations on seasoning the melon, Chef Voltaggio talked about his roots in Italian food and on different versions of the dish he's made, setting us all at ease. Safety regulations prevented each of us from cooking our own fish, unfortunately.

In Bermuda, two dozen passengers tagged along with Chef Voltaggio and visited Wadson's Farm, which has been in operation since 1976. There we walked and talked with Tom Wadson and Chef Voltaggio, learning about farming techniques on the island. Afterward, we drove to Bermuda College where we watched a cooking demo of two Bermudian dishes -- farine pie and codfish and potato cakes -- then tasted each.

The final Moveable Feast event of our cruise was the Moveable Feast Dinner. Here, Chefs Voltaggio and Blais supplied recipes and direction for appetizers, soups, entrees and desserts. As diners were eating, the chefs made their way through the dining room, pausing to talk with passengers and pose for photos. We enjoyed every dish from both chefs.

In a word: absolutely. Whether you're a self-proclaimed foodie, gourmand or simply love fine cooking, a Moveable Feast cruise is for you. The chefs were friendly, knowledgeable and ready to teach while in classroom and demo mode, but they were also quick with a handshake and kind word when you saw them around the ship. When the chefs did talk food, it never felt inaccessible; they were always open and inclusive to different palates and cooks of all levels.