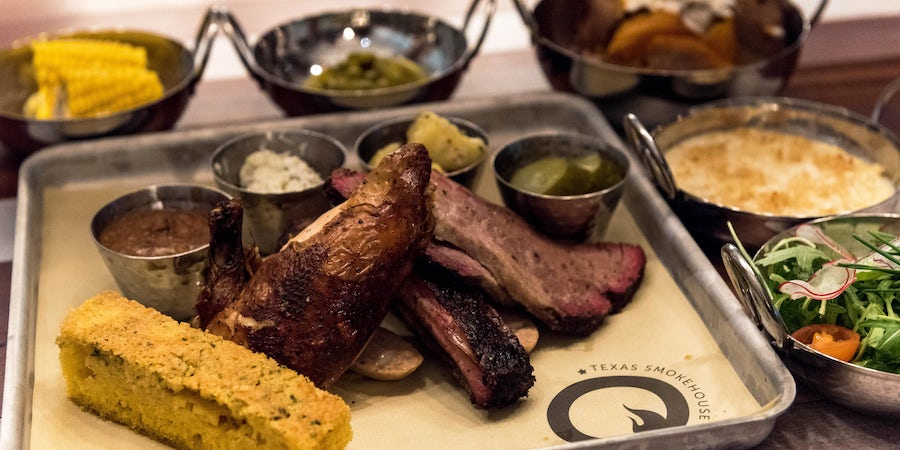 5 Best Places to Get BBQ on Cruise Ships

Barbecues are no longer limited to backyards in the summertime. More and more cruise lines are adding venues that serve up smoked meats and savory sides to their ships. From dedicated barbecue restaurants that go all-out with smokehouse-style decor and live bands, to more unassuming eateries where the food is the ultimate focus, there are several ships where meat lovers can get their fix. Even better: DH (dear husband) doesn't have to do the grilling. Prepare to salivate with our picks for the five best places to get BBQ, cruise style.

The line's newest ship, Carnival Horizon, takes its "smoked meats" game one step further with a dedicated barbecue restaurant (as opposed to a smaller, open-air buffet) that also doubles as a brewery. Guy's Pig & Anchor Smokehouse and Brewhouse offers a buffet-style barbecue lunch during the day, and higher quality eats at dinner, a la carte. Carnival Horizon even has its own smokers onboard, which make dishes like baby back ribs and trash can nachos. Barbecue lovers can enjoy juicy meats and hearty sides -- washed down with a cold beer, brewed right onboard -- while a live band sets the mood with country or classic rock music.

You'll be hard-pressed not to order everything off the menu at The Q on Norwegian Cruise Line's newest ship. The menu is broken up into Texas Teasers (appetizers), Southern Roots (small plates made with potato), From the Pit (single meat servings), the Pitmaster Platter (the works) and Sides -- with standout dishes including Texas crab cakes, crispy fried okra, jalapeno cheese grits and our personal favorite, the sweet potato with pecan honey butter and cinnamon. There's also a dessert menu and extensive drink list, with beer, scotch, whiskey, bourbon and crafted cocktails (like the smoked peach margarita) designed to complement the flavors of the food. The Q is open for dinner only, and dishes and drinks are priced a la carte.

Related: The Salty Dog Gastropub on Princess Cruises (Plus Menu)

Adding to the experience, the spacious restaurant boasts rustic contemporary decor, with wood-beamed ceilings and wall murals depicting scenes from the southwestern United States. A live band also croons country tunes on a center dance floor, turning the space into a honky-tonk that's bound to get you on your feet.

For a cover charge of $12, diners at Planks BBQ on Caribbean Princess can indulge in a three-course dinner that includes a starter, a main course and dessert. The highlight, of course, is the fact that main courses are served on planks -- and the venue is quite generous with its portions.

Diners choose four of six barbecued meats -- sou'wester pulled pork, chili-spiced roasted tri-tip, kielbasa smoked sausage links, Caribbean island smoked chicken drumsticks, hard cider barbecue pork ribs and chipotle barbecue meatballs -- which are served with a side of savory sauces like tangy apple butter and cider, and steakhouse smoky bourbon and ale. You also get a side of chili, coleslaw and fries. The key to eating here is pacing yourself with the appetizers. If you still have room for dessert, you get major bragging rights.

4. The Deck BBQ on Windstar Cruises

The closest thing to a backyard barbecue can be found on luxury small-ship line, Windstar Cruises. One night per cruise, on every ship, the Deck BBQ takes over the pool deck -- tempting cruisers with an elaborate display of smoked meats and seafood.

Dishes are served both buffet-style and made-to-order by the ship's executive chef. A highlight of the buffet is the Asian-style suckling pig served with applesauce. Meanwhile, the chef grills basted lobster tail, jerk-marinated chicken drumsticks and the fresh catch of the day. Seafood paella also is cooked right on the deck. The dinner soiree ends with a dancing show under the stars.

5. The Colonnade on Seabourn Cruise Line

Seabourn's fleet of luxury cruise ships treats passengers to a barbecue menu developed by Michelin-starred chef Thomas Keller, who helms acclaimed land-based restaurants like The French Laundry and Per Se. It's found in The Colonnade, Seabourn's self-serve venue, which offers a table service at night. On select nights, the Colonnade's usual menu is replaced by a special "Ad Hoc" evening menu, inspired by Keller's Napa Valley-based, family-style venue. Each night boasts a different theme -- including barbecue. With high-quality, beautifully presented smoked classics ranging from pulled pork to ribs, this is as classy as barbecue can get.