You may also like
Dismiss
The Piazza on Princess Cruises
Harmony of the Seas vs. Allure of the Seas
Music Walk on Holland America
Bars on Disney Cruise Line
Wheelhouse Bar on Princess Cruises
Spinnaker Lounge on Norwegian Cruise Line
8 Things You'll Love About Celebrity Edge
New Year's Eve Cruises: Celebrate New Year's on a Cruise Ship
The Lime and Coconut on Royal Caribbean Cruises (Plus Menu)
Pictures From the Ultimate Disco Cruise 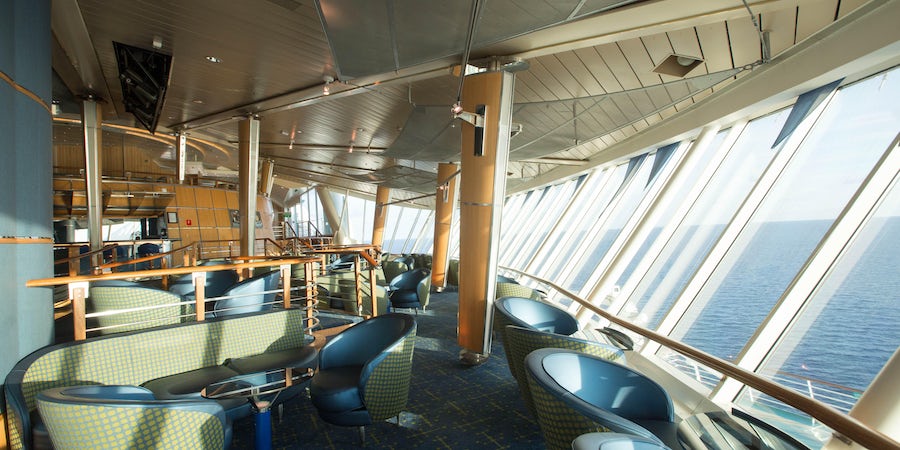 A staple of the Royal Caribbean fleet since the 1970s, the Viking Crown Lounge is known for its dramatic ocean views, perched as it is atop the highest (or second highest) deck on the entire ship. Though most ships in the line still include this lounge in their deck plans, the newest and biggest ships (and those recently undergoing renovations) have eliminated it to make space for other venues and attractions. But "the VCL" still has its ardent fans, who have treasured it as a quiet place to sit and chat over a cocktail, while enjoying phenomenal views.

Plus, passengers who like to dance late into the night tend to enjoy the DJ-spun tunes up here when it transitions to an adults-only club in the evening, rocking through to the wee hours of the morning.

The first thing you'll likely notice in Royal Caribbean's Viking Crown Lounge is the panoramic floor-to-ceiling windows that curve around the exterior of the space, flooding the lounge with sunlight and ocean blue hues during the day, and fading to a dimly lit, posh space after dark. Bar service typically starts around 4 p.m., but the space is available as a chill venue during the day.

Though each lounge is decorated differently depending on the ship, you'll usually see stunning light fixtures and statement furniture -- chairs, loveseats, small tables and larger sofas -- arranged into small groupings ideal for a date night for couples or friends.

The modest dance floor heats up when night falls, with DJs typically playing varied theme music throughout the night (for example, classic rock or '70s and '80s pop music might kick off the first hour but getting more contemporary as the crowd filters in).

Viking Crown Lounge shares deck space with other clubs or restaurants, with that space more open to the other venues than separated on some of the ships, making it feel less exclusive on some vessels than on others.

Order your drink selections from the full bar -- either by paying a visit to the bartender or flagging over the attentive waiters. Drinks include specialty and classic cocktails -- mezcal margaritas, Moscow mules, Bloody Marys -- plus, beer, wine and shots.

There is no cover charge to enter Viking Crown Lounge. As elsewhere on the ship, you'll pay for your drinks (with an added gratuity for bar and waiter service). Cocktails are priced from $9.50 to $14 for premium drinks.

Viking Crown Lounge can be found on the following ships:

See photos of Viking Crown Lounge on Enchantment of the Seas.