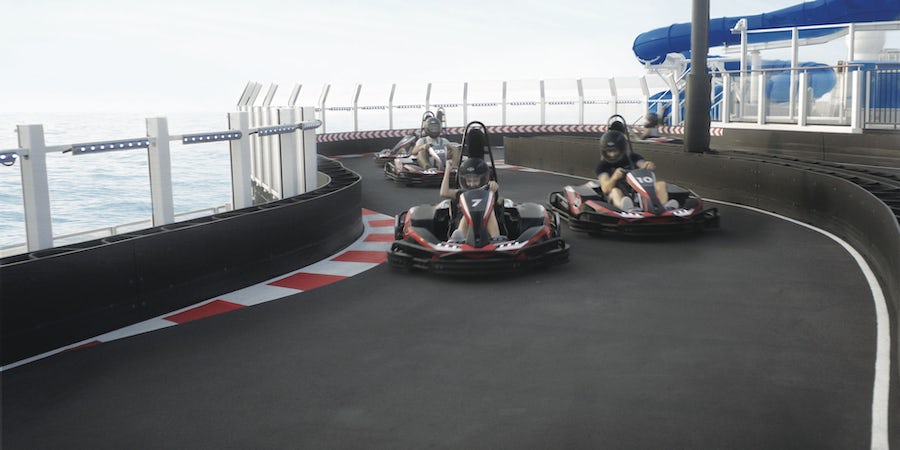 If you feel the need for speed, you can burn rubber at the go-kart racetrack found on select Norwegian Cruise Line ships.

Cruisers on Norwegian Cruise Line ships with go-karts can fulfill their racecar driver fantasies at this fast-paced attraction atop select ships. The two-level track is designed for speed, and drivers take full advantage, zipping around the S-shaped track at top speed.

But what is it exactly? The go-karts on Norwegian Cruise Line are electric-powered racecars. They are not, as you will be repeatedly told, bumper cars. No more than 10 cars can be on the track at once, and while drivers race around the curves, trying to pass each other, there is no official race occurring. You can drive at your own speed, but no more than 30 miles per hour.

Cars are easy to operate; there's a green pedal underneath the right foot for gas, and a red pedal beneath the left foot for the brake. There is a green button on the steering wheel that boosts the car's power (perfect for going up the hill from Deck 19 to 20), and a blue button for reversing (just in case you do crash into one of the tire bumpers that line the track). Drivers are instructed to hold their hands in the 10 and 2 o'clock positions at all times and all turns should be hard turns.

Beyond that, it's just a matter of following the track and trying to be aware of where other drivers on the track are located. Bumps are hard to avoid -- though technically they are not actually permitted -- as fast drivers often end up rear-ending slow drivers or clipping other fast drivers. It's a bit jarring when you're hit from behind but not painful. (The slower you drive, the more likely you are to get hit.)

Helmets are required and everyone is given a clean open-faced ski mask to wear beneath the helmet. Because the racecars are electric, there is little sound from the race track; however, the noise of a speeding race car is piped into the helmet to give drivers the full sense of being on a race track.

Each session is ten laps around on both Norwegian Bliss and Norwegian Joy; a racetrack "marshal" near the pit stop waves a red flag when your session is over.

Reservations are recommended, especially on full ships as the spots fill up quickly.

Related: Adult-Only Areas on Cruises: What to Expect

Ten laps around the track on both Norwegian Joy and Norwegian Bliss costs $15. Or you can purchase an unlimited go-karting package for $199 per cruise.