You may also like
Dismiss
Grand Circle vs. Vantage River Cruises
Viking vs. Oceania Cruises
Best Budget River Cruise Lines
APT vs. Scenic River Cruises
Holland America vs. Viking
What Is a Cabana on a Cruise Ship or Private Island?
Best Mother's Day Cruises
5 Reasons to Love Seabourn Cruises in Alaska
New Luxury and Expedition Ships Coming in 2020
How to Book a Suite for Less 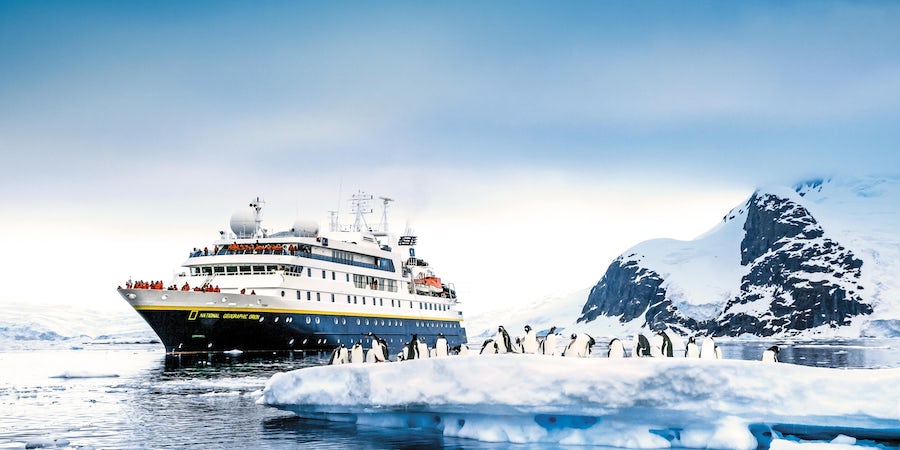 How Much Does an Antarctica Cruise Cost?

Most everyone dreams of cruising to Antarctica. What holds many of us back from making this dream a reality is its cost. While this expedition cruise is among the priciest you can book, polar sail fares do vary. We've searched for pricing tips and crunched the numbers so you know how much to budget for this splurge-worthy adventure.

The simpler the expedition ship and the fewer the inclusions, such as chartered flights or expedition gear, the less an Antarctica cruise costs. Vessels with the least frills -- such as those offering tiny cabins (possibly inside) with twin or triple beds, and basic but substantial meals -- cost the least. These ships focus on exploration rather than onboard amenities and pampering. If that works, you can save a substantial amount of money and absolutely make polar dreams come true.

On the other end of the price scale, vessels that double as yacht-like cruise ships offer oversized cabins or suites, onboard spas, numerous lounges, attentive service and lavish dining. These cruise expeditions offer many inclusions, such as airfare from your home city to the embarkation port, complimentary alcohol and gratuities. No surprise, they're priced the highest.

Ships offering some amenities and inclusions, perhaps flights between Buenos Aires and boarding port Ushuaia, Argentina, onboard gyms and wine with nice dinners, fall somewhere in between.

Prices can fluctuate -- sometimes week to week -- depending on demand and availability for specific departures or routes. Be on the lookout for promotions, such as early booking discounts. Also, consider sailing early (November) or late (March) in the Antarctica cruise season, as prices might be reduced if demand is lower. If budget is an issue, avoid the holiday season as these cruises often cost more. (Of course, they're often the most celebratory, too.)

Remember, too, such upscale cruise lines often include airfare (sometimes, business class) from your home city to the ship, pre- or post-cruise hotel accommodations, all shore excursions, some polar clothing (such as parkas) to keep, and even car service to and from your home airport. Onboard complimentary amenities include wine and spirits, gratuities and sometimes unlimited Wi-Fi, though it will be spotty on a polar cruise. You might even score complimentary caviar service whenever you want on lines like Silversea and Seabourn.

Antarctica cruise prices on more budget lines such as Hurtigruten and Quark Expeditions run about $650 to $750 and up per person per day (based on double or triple occupancy). Expect a private bath and onboard amenities like a fitness center, lounge and library. Mid-priced Antarctic sailings, such as the "luxury light" Viking start at about $1,000 per person per day (without airfare).

Sometimes, pricing depends upon the particular ship within a cruise line. Some expedition lines offer slightly pricier cruises on newer or remodeled ships with more onboard amenities, such as more expansive common spaces, spa, saltwater pool and complimentary wine with dinner, or with more adventurous itineraries, such as crossing the Antarctic Circle.

Typically, cruisers begin their adventure in Buenos Aires, although some lines use Puerto Williams, Chile, as homeport or have passengers fly into Santiago. Airfares depend upon your departure city; the cost can vary daily, so watch the pricing (better yet, have an app do it for you) until you find a reasonable fare.

You can also check with your expedition cruise line to see if they're offering any special pricing by booking your airfare through them. Some, like Quark Expeditions, run special fares for early bookings. (The company's Antarctica cruise fares average about $1,000 per person per day.)

If roundtrip airfare (typically from Buenos Aires or Santiago) to Ushuaia isn't included in your Antarctic cruise fare, that's an additional cost. Some Antarctica cruises offer roundtrip chartered flights between Buenos Aires and Ushuaia for $950 per person.

You might find it cheaper to book the flights yourself via a regularly scheduled airline; expect to spend about $400 per person. However, these airlines are less dependable and can cancel flights. If booking a commercial airline to Ushuaia, play it safe and book your flight one day before embarkation. Ushuaia hotel rooms should cost between $100 to $280, plus taxes and any other miscellaneous hotel fees and meals.

If your expedition line isn't hosting a one-night pre-cruise hotel stay, say, in Buenos Aires, you can find many hotel rooms at about $200 per night, plus taxes and meals per night. Remember to add in hotel-to-ship transfer costs, if necessary.

Finally, although most ships offer complimentary shore excursions, some offer special outings for a fee. So, if it's really important to go kayaking or snowshoeing, find a cruise that offers these activities complimentarily, or expect to fork over some extra dollars.

Plus, you might want to book bucket-list pre- or post-cruise land programs, such as a visit to the Chilean wine regions or camping out near the South Pole. Such land programs run the gamut from a couple of thousand dollars to several thousand dollars. For instance, Viking has a four-night Easter Island pre-Antarctic cruise from $3,499 per person, and a post five-night Gateway to Patagonia from $3,999 per person. Pricing usually includes hotels, many meals, guided tours and regional flights.

As Antarctic climatic conditions vary and change rapidly, you need layers of clothing, from insulating undergarments to waterproof knee-high boots for wet Zodiac landings. Most cruise lines provide some of the gear like parkas (to keep) and waterproof boots (to borrow); others require that you bring your own. Prices can vary greatly depending upon the quality of the gear and where you purchase it.

If you bring all your own attire except for waterproof boots and a parka, count on spending the following: $45 to $100 for a fleece jacket to wear under your parka, $35 to $150 for a thermal base layer set, $35 for a warm beanie or winter hat, $35 to $80 for waterproof rain pants and $10-to-$20 for glove liners to wear under your $20-to-$100 snow gloves. (See our companion piece for Antarctica cruise packing tips.)

Comprehensive travel insurance, including emergency medical coverage, is mandatory. (Some cruise lines factor emergency evacuation insurance into the cruise fare; check before you make any purchases.) Also check your credit cards and see if any offer travel insurance coverage or benefits. Prices for trip and medical insurance vary by your age and the state in which you reside. Insurance can run up to $2,000 or $3,000 per person for a deluxe plan if you're 65 years old. Read the fine print, particularly the medical and cancellation exclusions, before purchasing.

Bottom Line: How Much Does an Antarctica Cruise Cost?

You need to budget at least $10,000 per person, based on a double-occupancy cabin, for a complete Antarctica trip including a 10-day cruise, airfare between Buenos Aires and the United States, airfare between Buenos Aires and Ushuaia, expedition gear, travel insurance and a one-night pre-cruise hotel stay. Costs can zoom up from this ballpark figure based on level of accommodations, cruise line, timing of the trip and pre- or post- cruise tours.