You may also like
Dismiss
O'Sheehan's Neighborhood Bar & Grill on Norwegian Cruise Line
RedFrog Pub on Carnival Cruise Line (Plus Menu)
Guy's Pig & Anchor Bar-B-Que Smokehouse on Carnival Cruise Line (Plus Menu)
Husband Won't Cruise? His Top 9 Excuses and the Arguments You Can Use to Get Him Onboard
Which New 2018 Cruise Ship Best Fits Your Personality?
Royal Caribbean Cruise Beer Menu
Pictures of Carnival Panorama
Cruise Beach Bars We Miss in the Caribbean
Just Back From Odyssey of the Seas: Why Playmakers Is The Best Cruise Ship Sports Bar 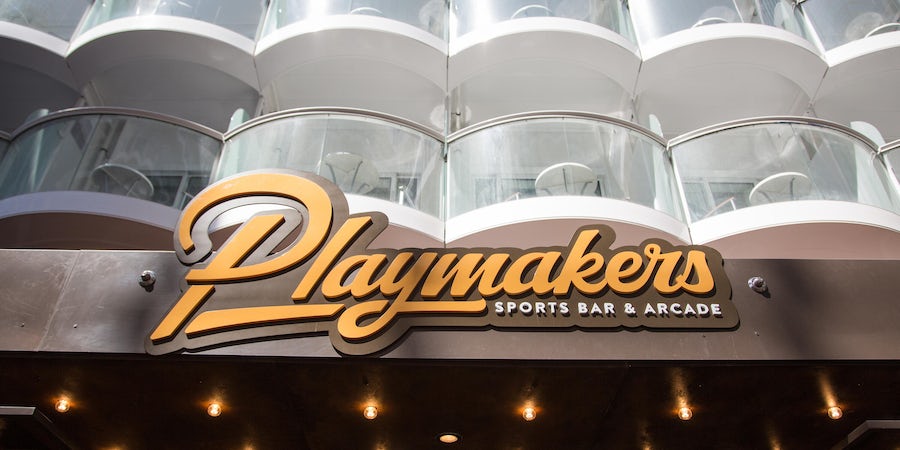 If you like your beers crafted, your wings hot, your burgers rich and delicious and -- most importantly -- you want to catch every single sporting event live, then Playmakers Sports Bar is the place for you.

The room features an L-shaped bar at one end, 31 large TV screens dotted around the space, sofas, dining tables and chairs. There is also plenty of seating outside, directly on the Boardwalk. Adjoining the bar area, accessed through sliding-glass double doors, is the arcade area.

Playmakers serves a wide variety of craft beers and cocktails as well as snack foods such as burgers, wings, nachos, sandwiches and sliders.

There is also a separate menu with the list of all the forthcoming international sports matches.

Inside you'll find games such as Connect 4 and Jenga, and the back walls have beanbag tosses and shuffleboard tables.

We did not watch a game, but we did enjoy a few beers and a bite to eat. The place was pretty full, with a number of groups and couples. We loved it. The bartenders were friendly and engaging, offering to mix some great-sounding, game-themed cocktails for us (Knockout Punch, Goal Post Margarita, Playmaker's Bloody Mary); and talking us through the food options.

What particularly impressed us was the food on offer. So often in a sports bar, food is just there to soak up the booze but not in Playmakers: The burger was delicious -- excellent quality patty, bacon, cheese and all the toppings -- for just $9. The wings were also delicious and a good value -- 12 for $8 -- with a variety of increasingly hotter sauces (Little League, Minor League, Major League). You can also chow down on pulled pork sliders, potato skins, nachos and Caesar salad, all priced at $6 or $7 for very generous portions.

Beer-wise, again a great selection: eight craft beers, including IPAs, wheat beers, a lager and an ale. But there is also a wide range of the usual suspects: Coors, Bud etc.; ciders; flights; and the aforementioned cocktails.

Absolutely -- this is a fantastic addition to the Royal roster of bars and eateries. It's in a prime spot on the Boardwalk, with views to the AquaTheater, Ultimate Abyss, Carousel and passing passengers.

Playmakers shows games/fixtures/events/matches based on where the ship is in the world. So, for summer 2018, it was mainly European games and English football fixtures, with the odd smattering of U.S. sports games (we did spot an NBA Basketball game on our Malaga sailing). With the ship now located permanently in the U.S., games are primarily all U.S. matches.

Which Ships Have Playmakers?