You may also like
Dismiss
9 Best Cruise Lines for Boutique Excursions
Royal Caribbean vs. Disney Cruise Line
Cruise Mishaps: 14 of the Worst Ideas Ever in the History of Cruising
Cruise Costs: Is Carnival Good Value for Money?
8 Reasons Why You'll Love Princess Cruises' Crown Princess
19 Free Things to Do on Royal Caribbean's Oasis-Class Cruise Ships
5 Things to Know About Family Expedition Cruising
12 First-Time Cruise Questions You Didn't Think to Ask
6 Tips For Cruising to Alaska on a Budget
What Kind of All-Inclusive Cruises Can You Find In Alaska -- and Which One Is Right For You? 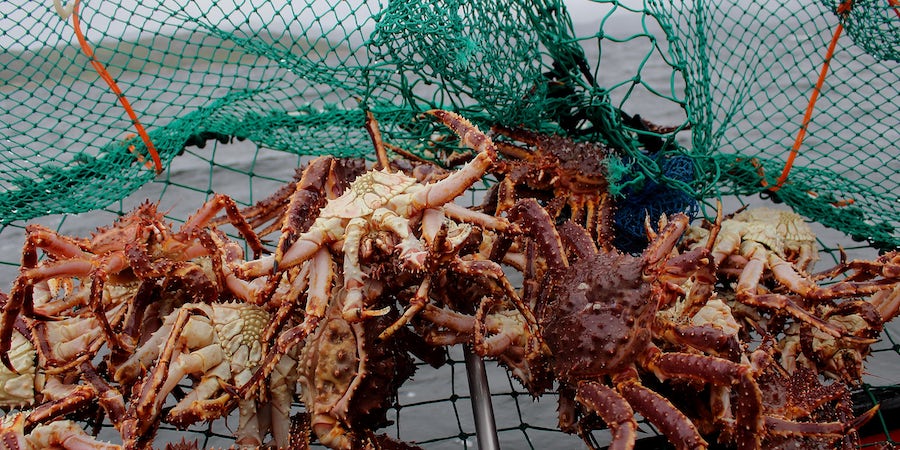 King Crab Fishing in Norway on a Cruise

The King Crab Safari (as it is called) is an excursion offered by Hurtigruten in Kirkenes, in the far north of Norway, during the winter months. It is organized by the Snow Hotel, which is around 20 minutes' drive from where your ship docks. The excursion takes place on a frozen fjord a short drive from the hotel. It costs 1,890NOK (about $240USD/£162) booked through Hurtigruten.

This roughly four-hour excursion is billed as a King Crab "Safari", but would be more accurately billed as King Crab Hunt or King Crab Fishing, as the crabs are not observed -- but killed (quite brutally).

The excursion starts with a short bus ride from the Snow Hotel to a log cabin on the edge of a frozen fjord. A snowmobile-drawn sleigh takes you out on the fjord where, through a hole in the ice, you pull up the traps holding the king crabs. Everyone in the group (in theory) gets to take part in sawing the hole in the ice and bringing up the catch. You then head back to a cabin, where the crab is cooked and served, before returning to the Snow Hotel.

The meeting point is at the Snow Hotel; then it's a very short ride (about 10 minutes) to a traditional fisherman's home on the edge of a frozen fjord. There, we are kitted up in snow suits, motorbike helmets and massive crab gloves (huge leather and suede gloves which come up almost to the elbow) before jumping in a sleigh and heading out onto the ice for a five-minute journey to the fishing holes. All over the frozen fjord, there are wooden structures with ropes attached and boards plugging the holes, which are rectangular in shape.

We park up either side of the structure and gather around. As the hole has already been sawn, we don't have an opportunity to do any sawing ourselves (which is what is advertised, but it could be because we are late in the season). Instead we watch as the guides haul up the crab pots in which the monsters have already been caught.

King crabs are aptly named, growing up to two meters (more than six feet) across and weighing in at up to 15 kilograms (a massive 33 lbs -- heavier than a two-year-old boy). Red king crabs are an invasive species in Norway, eating their way across the seabed, killing endemic species and disrupting the ecosystem. There are also a lot of them, and numbers need to be controlled. We hold onto these thoughts as the next part of our "safari" begins.

It's at this point, with no warning, that things turn gruesome. One of the guides, who is brandishing a large knife, proceeds to dispatch them with a single stab through the shell. In most cases it's swift -- the crab twitches then lies still -- but not always. He encourages us to pick them up and take pictures, but the crabs are bleeding green blood all over the ice. For most of us this is fine, but not so for those (like me) with kids who are visibly shocked at the brutality of the event. In fact, my 10-year-old, more used to catch-and-release crabbing in Cornwall, becomes distressed and heads back to the sleigh.

"This is not a safari," he comments. And he's right. You don't kill on a safari; you observe. This is a hunt, an adventure or a fishing trip, and should be billed as thus.

Back at the hut, we change and amass at long wooden tables on the upper floor, which has a large picture window looking out onto the fjord. After about 20 minutes or so, huge plates of king crab are served. We're told how to use the various implements and which part is the tastiest. The crab is delicious and only needs a squeeze of lemon and perhaps some pepper. 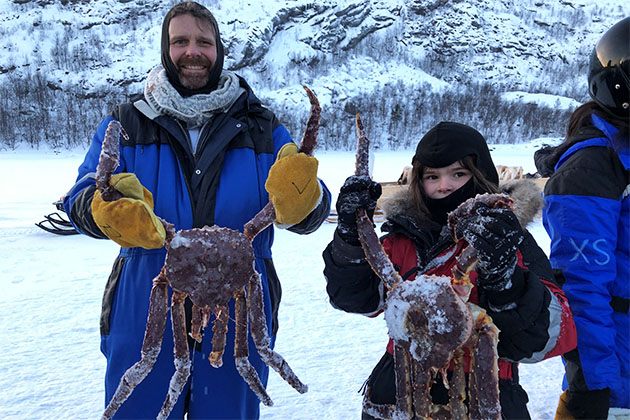 Yes -- but with a warning either not to do this with young or sensitive kids, or make sure you shield their eyes when the killing begins. The journey out across the frozen lake is fun, and the crab is delicious.

Our view: This should be renamed King Crab Hunt or King Crab Fishing, and guests (especially those with kids or a squeamish disposition) should be warned about what's in store.

Dress in warm layers. (As noted above, helmets are provided, as are snow suits.) Do bring gloves, sunglasses and a rain jacket; it might be wet, cold, sunny, snowing or all four. Bring a GoPro and a selfie stick, as holding the camera steady is tricky with big gloves. Children need to be minimum seven years old to participate.