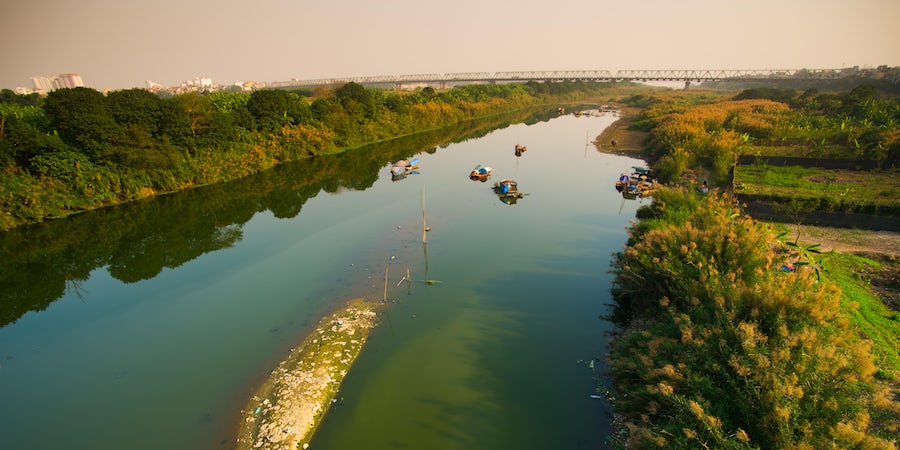 Starting in Southwest China, the river and its tributaries flow past both tranquil rice paddies and pulsing urban areas, connecting the capital of Hanoi to iconic Halong Bay in the Gulf of Tonkin.

And, for river cruisers who've already sailed the popular Mekong in Southern Vietnam and Cambodia, the Yangtze in China or the Irrawaddy in Myanmar (Burma), a journey along the Red River offers a unique insight into a still-rural but rapidly developing Southeast Asian country.

The river is so new to cruising that only one line is currently offering sailings. Pandaw, a river cruise line that specializes in Southeast Asia, was looking for an alternative to the increasingly crowded and competitive Mekong. So in 2015, it moved one of its shallow-draft vessels, the 32-passenger Angkor Pandaw, and launched what remains the only commercial cruise along the Red River. Though Pandaw's all-inclusive, 10-night trips are offered year-round, itineraries vary by season according to water levels, which fluctuate dramatically depending on rainfall.

Highlights of every Red River cruise are a full day in Hanoi and a two-day stay on Halong Bay, a UNESCO-designated labyrinth of some 2,000 limestone islands and outcroppings. But, those "bucket list" destinations aside, itineraries emphasize small-town cultural encounters rather than major monuments or spectacular scenery. (Indeed, on many stretches of the river, which flows through mostly flat terrain, the riverbanks are often lined with piles of trash.)

For example, during a visit to the Hung Lo Buddhist temple near Viet Tri, about 50 miles northwest of Hanoi, passengers are treated to a special performance of "xoan" (pronounced "shwan") singing. The ancient form of Vietnamese storytelling, passed down generation to generation and recognized by UNESCO as an example of "intangible cultural heritage," incorporates not only singing but also dancing, acting, chanting and drumming.

At the prosperous bonsai-growing town of Dien Xa, about 60 miles southeast of Hanoi, passengers are given a tour of one family operation by the owner's proud 13-year-old granddaughter, Nguyen Linh Chi. Her explanation of what makes Vietnamese bonsai unique -- bigger tends to be better, and shapes are much more natural than the Japanese versions -- is fascinating. But, even more interesting on one recent visit was the conversation that followed during a leisurely stroll back to the ship. In nearly flawless English, Linh Chi confided that she would love to study in the United States one day -- before returning home to continue the family business of coaxing nature into artistic masterpieces that can command tens of thousands of dollars per specimen.

And, almost everywhere along the route, visitors are greeted with broad smiles and choruses of "xin chao" ("hello") including on the river itself, where everyone from traditional leg-rowing fishermen to deck hands on oceangoing freighters seem both surprised and delighted to see something as novel as a cruise passenger.

Related: 5 Reasons a River Cruise on the Danube Is for You

Northern Vietnam has a cool to cold season from November to March and a warm to hot wet season from April to October. December and January, in particular, can get quite chilly, and heavy mists can curtail visibility at such scenic highlights as Halong Bay and Thung Nang/Tam Coc (known as "Halong Bay on Land.") Summer is the rainiest time, and late summer/early fall typhoons can create stormy conditions.

A note about cruising during Tet, or Vietnamese Lunar New Year: As the most important holiday of the year (generally falling in January or February), Tet is celebrated for several weeks beyond the actual date. While this translates to festive street decorations and decked-out locals visiting family and friends, it might also mean shuttered stores and workshops at stops along the way. 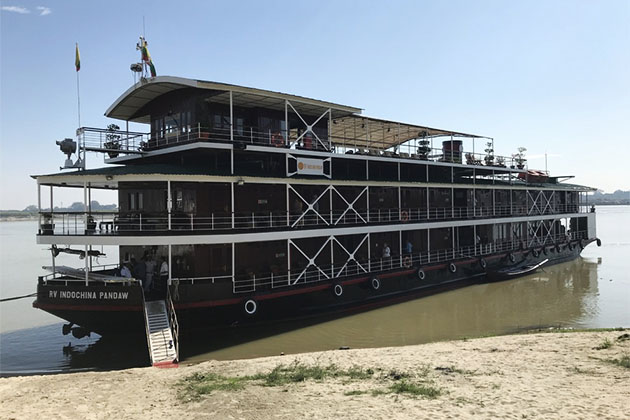 A few companies sell short excursions along portions of the Red River Delta, and hundreds of tour boats offer Halong Bay cruises ranging from a few hours to several days. But, Pandaw is the only commercial cruise line that travels the Red River and its tributaries and includes an overnight in Halong Bay at the beginning or end of every sailing.

Related: Why Pandaw Is the River Cruise Line for You

Along with a day in Hanoi, all Red River itineraries feature daily excursions, many by motor coach, to visit an eclectic mix of temples and small towns where residents make such traditional products as ceramics, bamboo lacquerware, conical hats and gleaming, elaborately carved wood furniture.

December through March, cruises start or end in the provincial capital of Viet Tri near the confluence of the Red and Lo rivers and include more time on a larger inland water cruising area on the coastal plain around the major industrial port of Haiphong.

Halong Bay: This eye-candy combination of steep, uninhabited limestone peaks and sheltered, absinthe-green water, known as "Where the Dragon Descends into the Sea," got its name from a legend that a dragon sent by the gods to help the Vietnamese fight Chinese invaders fell into the bay, leaving the islands behind.

Featured as a prominent backdrop in the recent Hollywood hit "Kong: Skull Island," Halong Bay ranks as Vietnam's top visitor attraction, drawing nearly 7 million tourists (including about 3 million foreigners) a year. But, while most international cruise passengers arrive at the Bay Chai port in Halong City and are limited to a six-hour day trip through the most congested section of the bay, those on a Red River itinerary spend nearly two days just to the south, exploring and spending a night at anchor in less-crowded but equally scenic Lan Ha Bay.

During one afternoon excursion, passengers use two-person kayaks or traditional rowboats (where the boat captain does all the work) to visit the "Bright and Dark Cave," a grotto that leads to a sheltered lake ringed by steep cliffs. Other highlights include a stop at lush, craggy Cat Ba Island, where passengers bike or take a shuttle to the farming village of Viet Hai, a visit to a floating fishing village and, weather permitting, a private sunset beach party on an idyllic islet.

Hanoi: Pandaw passengers begin their Red River journeys here, with included motor coach transfers from the airport or the city's Pan Pacific Hotel to the ship's departure points in either Viet Tri, Hoa Binh or Tuan Chau Island (just south of Halong City). But, Pandaw also stops at the historic, frenetic capital for a full day of exploring.

Included in the cruise fare are guided visits to the Old Quarter, a warren-like maze of shops and restaurants, the Soviet-style Ho Chi Minh Mausoleum complex, where passengers join lines of schoolchildren waiting patiently for their chance to get a quick peek at Uncle Ho's waxy, well-preserved remains and the Temple of Literature. Home to the country's first university, it dates back to Hanoi's founding 1,000 years ago and is modeled after the temple at Confucius' birthplace in Qufu, China.

Another stop is at the infamous Hoa Lo Prison. Better known to Americans as the Hanoi Hilton, a sarcastic nickname bestowed by captured U.S. pilots (including Senator John McCain) who wound up there during the Vietnam War, Hoa Lo was established by the French in the late 19th century to help thwart a growing Vietnamese nationalist movement. Though most of the prison was demolished to make way for an apartment and office building (now rumored to be haunted), a remaining wing has been turned into a museum. While the dank, claustrophobic cells and torture instruments used by the French are horrific reminders of man's capacity for evil, the section devoted to the American prisoners is considerably and suspiciously sunnier -- including photos of a convivial Christmas dinner and prisoners reading letters from home.

Hoa Binh/Da River: During the ship's high-water itineraries from April to December, cruises begin or end in Hoa Binh. Located in hill country traditionally occupied by the Muong ethnic group, it was the site of a major battle with the French in late 1951 and early 1952 and now is home to the country's largest hydroelectric dam.

Excursions include a boat ride on the power station reservoir and a visit to a local hill tribe village, but the biggest draw -- and the favorite of Angkor Pandaw's captain -- is a full day spent sailing the clear waters of the Da River through Ba Vi National Park. A popular weekend getaway for city-weary Hanoi residents, the mountainous park was created as a hill station during the French colonial period and is known for its lush tropical forests.

Duang Lam: This atmospheric small town near Hanoi earns its official "ancient village" label with a history that dates back 1,200 years and dozens of traditional homes that are up to four centuries old. A guided walking tour includes a stop at one of them, where the 17th-generation owner, a veteran who fought for North Vietnam and was wounded in the 1968 Battle of Khe Sanh, welcomes passengers with cups of rice wine.

Related: The Greatest Generations Foundation: Just Back From a Cunard Cruise with Veterans

Thanh Ha Commune: The Vietnamese art of water puppetry features puppeteers who stand behind a bamboo screen in waist-deep water, manipulating elaborately carved, lacquered wooden figures. It got its start in the flooded rice paddies of the Red River delta in the 11th century, supposedly as a way to entertain children during the steamy summers and keep them away from dangerous currents in the river.

Large commercial performances are now held in Hanoi and elsewhere in Vietnam, but this endearing version -- complete with live singers and drummers and a peanut gallery of local youngsters -- takes place on a pagoda in the middle of a traditional pond, in a village that passengers walk to directly from the ship.

Come for the people, not for pristine landscapes. With some notable exceptions -- Halong Bay, the Da River and Ninh Binh province, among them -- the muddy Red River and its tributaries flow past uninspiring scenery. But, cruises here do offer a unique opportunity to interact with Vietnamese in areas where Western tourists are still rare.

Bring sturdy footwear and "temple socks." Slip-ons with solid support and nonskid soles are ideal for navigating steep, slippery riverbanks and for ease of removal before you enter temples, pagodas and private homes. (One veteran of several Southeast Asian cruises on Pandaw vessels swears by her Merrell clogs.) Pandaw staffers collect passengers' footwear for cleaning each time they return to the ship, so socks are handy while you're enjoying a glass of cool juice on deck and waiting for your shoes to be returned to your cabin.

Be ready to "go with the flow." Fluctuating water levels and fickle weather are par for the course along the Red River and its tributaries, and a Pandaw disclaimer pointedly notes that "this is a new river expedition and itineraries and schedules are very much subject to change due to uncertain local conditions."