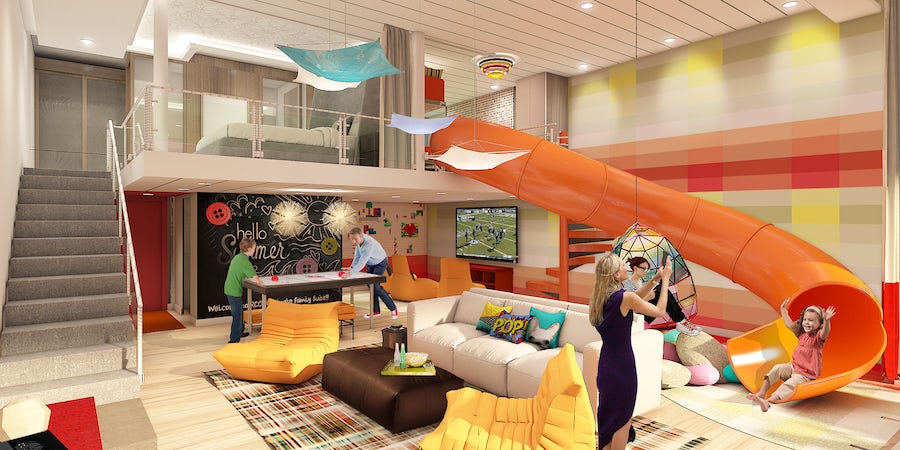 Royal Caribbean revealed the one-of-a-kind Ultimate Family Suite on Symphony of the Seas in March 2018. The two-story, two-bed family "playroom" features a slide from the kids' bedroom to the living room, two giant TVs, a LEGO wall and a balcony with a hot tub and a climbing wall, among other features. We got onboard to test it out and ask the question is: Is the Ultimate Family Suite a gimmick -- or game changer?

The Ultimate Family Suite is a one-off -- unique to Symphony of the Seas -- and another addition to Royal Caribbean's family suite accommodation options. High up on Deck 17, with a red carpet outside (just in case your fellow passengers do not know where it is), the 1,134-square-foot suite spreads across two floors and can sleep eight in two bedrooms. It's part Sky Loft Suite (in that it's a split level), which you'll find on all Oasis-class ships; and part Royal Suite (by its sheer size), and is effectively a giant play area for kids.

Its main feature is a twisty slide connecting the kids' bedroom to the living room, flanked by a circular staircase. A multicolored hanging pod chair is the centrepiece of the space and sets the tone for the living room; colors are all bright primaries -- oranges, yellows, blues, which will definitely appeal to younger kids. Funky lights are suspended from the ceiling. The main room has an air hockey table as well as a large sofa and another giant TV, and stairs leading up to the main bedroom.

The master bedroom has a king-sized bed and bathroom, as well as wraparound curtains for privacy as it looks down onto the living room. It also has a very cute giant "cat flap"-type hole in the door for your little ones to burst in.

Inside Look: The Haven On Norwegian Cruise Line - Video

The kids bedroom (across the hallway) has a sofa bed, a bunk bed and a drop-down bed -- which means you can in theory get 5 kids in the bedroom, plus two in the living room -- a total of seven. But, do you really want five kids in one room? We're not sure how they will ever get to sleep.

There is also a separate area off the living room, with a floor-to-ceiling LEGO wall, giant Connect 4, a small soft drinks cooler and a huge TV and a sofa bed.

Outside is a 212-square-foot aft-facing balcony with a whirlpool and a kids' climbing wall (it's enclosed in netting to prevent any falls), as well as a table to seat six and loungers.

Full admission: We did not sleep in the Ultimate Family Suite. We visited it and we poked around (and maybe we tried the slide -- almost getting stuck inside; it is meant for kids after all). We did, however, take some time to sit down and soak it in, to consider whether this could work for a large family.

Related: Do's and Don'ts for Cruising With a Baby

Firstly, it's just two rooms, and the adults' room is in fact open, as it is effectively a large balcony looking down onto the main living area (kind of like a mezzanine and exactly the same design as a Sky Loft Suite, if you are familiar with that). So, the first thing we thought was: "It's going to be noisy, what with those two giant TVs and the living area effectively a giant kids' playroom." And that's the point, really -- this suite ought to be called the Ultimate Kids' Suite, as it's really not that parent-friendly. As an adult with kids, we want privacy, not a giant open space. If your kids adhere to a bedtime routine, this could work, as you could put them down and then enjoy quality time either inside or out on the balcony. If they don't, you may wish you'd bought two separate cabins.

And, as we said above, how on earth you're going to get five kids of varying ages to sleep in one room, we're not sure (but hey, we're sure they don't mind!).

It's very hard to justify spending $30,000 on a week's accommodation, even if you do the math and figure that if you are a family of six you'd alternatively have to buy two cabins at the very least. Having said that, the suite's pretty much sold out for all of 2018; a family of six even booked the Ultimate Family Suite for Christmas 2018 -- for $85,000. But for most, this suite is out of reach, making it more gimmick than anything.

Related: 10 Tips for Stretching Your Cruise Dollars Onboard