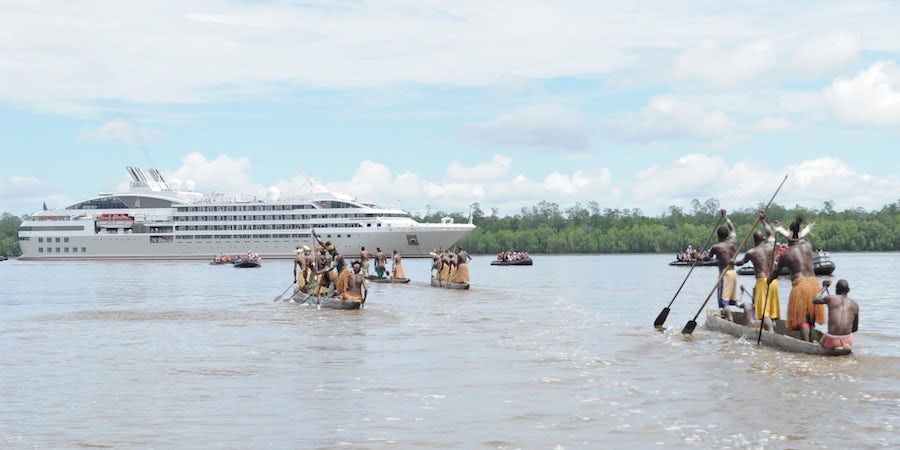 Love Polar Expedition Cruises? There's An Even Bigger World Out There.

Expedition cruising is one of the hottest trends in the travel industry today. As proof, look no further than the fleets of intimate new-builds sailing out of shipyards over the next few years -- all designed to journey to extreme latitudes for a growing audience of sophisticated clientele.

"The number of hard-core travelers asking us about small-ship expedition cruises has quintupled in the past three years," says Wendy Perrin, travel expert and founder of trip-planning site WendyPerrin.com.

But itineraries are no longer limited to the icy bucket list hinterlands of the Arctic and Antarctica. Although these ships are built with ice-rated hulls, their size, design and accessories open up a world of possibilities in smaller -- sometimes port-free -- destinations.

Indeed, the annual window for cruising the Arctic and Antarctica lasts barely three months, so what happens to these ships between polar seasons, as they transition from one end of the earth to the other?

Certainly, as travelers discover expedition cruising, many times with introductory trips to the polar regions, they're also learning that so many remote parts of the world -- from Papua New Guinea to the Seychelles Islands -- are open to adventure cruisers. And here's another neat new trend: During some parts of the year, expedition cruise lines take their experiential DNA -- in-depth and adventure tours and enhanced onboard learning opportunities -- and ply more mainstream waters, such as the Mediterranean. Whether it's exploring remote, non-polar regions or gaining a new understanding of cruise ports in Europe and North America, small-ship size allows for more immersive shore activities and discovery-oriented explorations. Some itineraries explore seemingly familiar areas from new vantage points -- Quebec to Milwaukee through the Great Lakes, anyone? And, other itineraries plunge into specific themes, such as gastronomy and oenology along the Atlantic coast of France, a family-oriented Mediterranean cruise that takes an adventurous approach to the region's history, and island-hopping around Europe against a backdrop of Chopin's music.

Related: What It's Like Sailing the Great Lakes With Viking: Just back from Viking Octantis

The fact that expedition lines, which long had designed ships with more basic appeal, are embarking on major new-build expansions, means that these small and nimble vessels are appealing to an increasingly diversified clientele. In the past, expedition cruising placed functionality well above luxurious appointments. Today's expedition ships are upping the game -- combining real comfort with the means to visit "the back of beyond," exploring smaller ports where the big ships can't go.

Typically carrying 250 or fewer passengers, cabins aboard these modern expedition ships are at least 200 square feet, with balconies, mini-bars, upmarket bath amenities, outdoor pools and sun decks, and Wi-Fi accessibility. The best ships provide gastronomic cuisine, a spa and workout room, and a theater where guest lecturers offer rich background on the ports of call.

Typical expedition ships also carry a fleet of Zodiac boats for remote landings, accessories that come in handy for the unusual stomping grounds of these vessels.

"These ships provide a comfortable travel infrastructure in parts of the world that otherwise have none," explains Perrin. "And so, travelers are flocking to them."

Creature Comforts Matter but the Destination Is Key Investigate port schedules and you'll quickly see how these vessels present intriguing sailing opportunities in offbeat corners of the world.

Related: Daytime Activities on a Luxury Cruise: What to Expect

"On the nearly 1,000-nautical-mile coastline, there are only a very small handful of places which can be accessed by land-based vehicles," explains Chris Done, a retired regional manager for the Western Australian Department of Conservation and Land Management, who worked with cruise lines to introduce them to the region's most special places.

Guarded by ancient sandstone and igneous cliffs, the Kimberely's King George River invites inland exploration of deep red gorges, while thousands of uninhabited islands line the coast, according to Done. "The area is still relatively a 'new frontier' from a biological point of view, with new species of plants, and occasionally animals, being found and described on a regular basis."

Cultural experiences are as important as natural ones. On trips to the Kimberley region, passengers meet up with Aboriginals to learn, firsthand, about their culture and history. On an around-Indonesia cruise, Cruise Critic member Daniele explains that what stood out for her: "We visited some very remote islands in Indonesia and met ethnic groups, such as the Toraja. Our line went out of its way to let us observe firsthand the Torajan funeral rites (we even went there with two live pigs we could offer to the family). It was superb!"

"More and more travelers today are drawn to remote places and one-of-a-kind itineraries," adds Perrin. "They're intent on avoiding overdeveloped destinations with tourist crowds, and they want to feel that thrill of 'discovering' unspoiled islands, natives with distinctive histories and cultures, and still-wild frontiers. Such places are often hard to access any other way than by small expedition ship."

For instance, while big ships tie up in the bustling ports of Bali and Jakarta, the Java Sea and Banda Sea of Indonesia are ideal for expeditions ships, sailing to such places as Tanjung Puting National Park, a preserve for the endangered orangutan, or Triton Bay, where limestone pillars mark the Coral Triangle, home to more fish and coral species than anywhere on the planet.

Among the other unusual regions that see expedition ships is Africa. Here, the volcanic Cape Verde archipelago may have once served as Portugal's hub for African slave trade, but today it's better known for its landscapes of lava, salt flats and deserted beaches; its unique as well as migratory bird species; and the lovely, melancholy musical style, morna. Other African archipelagoes appearing on truly select expedition cruise itineraries include the Bijagos Islands of Guinea-Bissau, a UNESCO-designated biosphere reserve; the Seychelles with their dream beaches and rocky coves; and the remote atolls of the Maldives.

When expedition ships take time to explore the ever-popular waters of the Mediterranean and Caribbean, they chart their own course. Greek Island cruises might slink into Volos, the birthplace of Achilles, or to Rethymnon, close to Crete's Minoan palace at Knossos and the archeological museum of Heraklion. Caribbean cruises drop anchor in the idyllic isles of the Grenadines, but venture even further south to take in Venezuela's magnificent Orinocco River, and on to Cayenne, French Guiana, where Haitian, Brazilian and European cultures mingle and the ruin of Devil's Island looms on the horizon. Being onboard an expedition vessel is often a lot like going back to university -- but even more stimulating and intriguing. Look for enrichment speakers, experts in fields related to the specific itinerary, to illuminate the region via culture, history, anthropology, culinary arts and the natural world. Andrew Poulton, director of onboard programs, enrichment division for Compass Speakers, which helps put cruise lines in touch with experts with compelling stories to tell, says that as expedition ships broaden their horizons, destination experts have never been more in demand.

Related: So You Want to Be a Cruise Ship Lecturer?

"The guests are really well-educated, in addition to being well-traveled, and they expect a level of detail and expertise that you don't get on mainstream cruise ships," Poulton tells us. "The clientele makes a point of knowing about the destination before they step onboard. They've read about it, and they're looking to have their passions enriched and questions answered. The expedition team has to be up to it."

From marine biologists to ornithologists, geologists to archaeologists, these experts take passengers on a deep dive with each destination, providing memorable perspective for those of us who view the world as their personal classroom.

For true travelers -- not simply tourists, but those who want to see the world with a sense of purpose -- expedition ships can offer a personally enriching cruise experience.