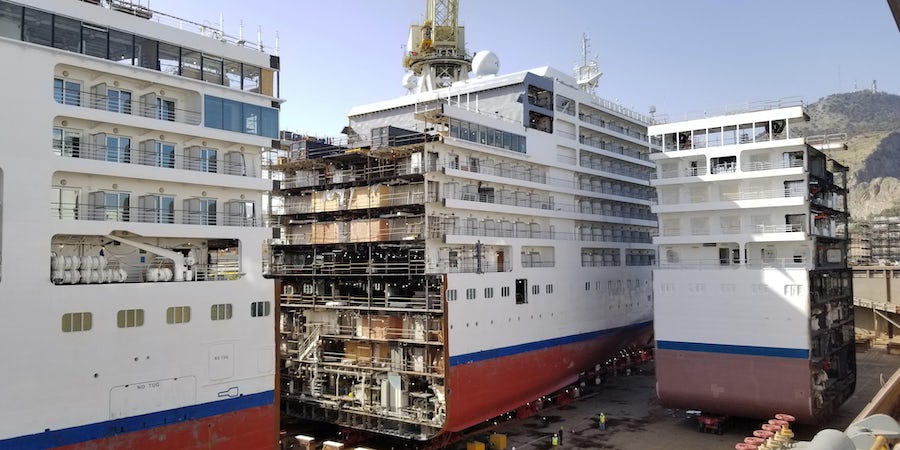 What Is a Cruise Ship Stretching?

A cruise ship stretching refers to the process of adding more space -- including additional cabins, new outdoor venues and restaurants -- to a ship by cutting it in half and inserting a new section.

Cruise ships are built in blocks. Think of it like building with Lego pieces: Many blocks of different sizes and shapes are put together to create the ship. Each massive block is built separately, with duct work, wiring and even plumbing in place for that section. Blocks are then welded together, and the various systems for electric, HVAC and plumbing are integrated. Because ships are built this way, a cruise ship stretching is easier and more commonplace than you might imagine.

To stretch a cruise ship, builders move the vessel into a dry-dock facility at a shipyard. They load the ship onto massive blocks and cut it in two. The cut must be made in a spot that won't compromise the structural integrity of the ship.

Separately, the shipyard will build a new block to be inserted. It will be outfitted with pipes and electrics and will be ready to slide into place as soon as the cut is complete. To make sure the entire process finishes quickly, the block is built before the ship even arrives to the shipyard.

Once the cut is complete, the cruise ship stretching begins. One section -- the aft, for example -- remains in place, while the other section is rolled forward or back using an elaborate system of rollers or pulleys, leaving a large gap between the pieces. (The process varies depending on which shipyard performs the stretching.) The new block is moved into place, the ship is welded together inside and out, and systems are connected. And, of course, the exterior of the ship is repainted, making it difficult to tell where the ship was sliced. A ship being stretched will be in the dry dock for a month or more.

Cruise ship stretchings often are accompanied by massive refurbishments. For example, a $70-million-plus operation on Silversea's Silver Spirit in spring 2018 included the addition of new restaurants and suites, and an overhaul of furnishings, carpets and linens. Cruise lines often opt to stretch ships as a way to get a new cruise ship feel -- complete with new cabins, which generate the necessary revenue -- without the new ship price tag. Many cruise lines have stretched ships in their fleet, including MSC, Norwegian and Royal Caribbean.