You may also like
Dismiss
5 Best Disney Dream Cruise Tips
Cruise Classes: 21 Things You Can Learn on Your Next Cruise
Where to Find Your Favorite Characters on a Cruise
Disney Cruise vs. Carnival Cruise
What Is the Disney Cruise Personal Navigator?
Princess Cruises' Shark Week
9 Free Things to Do on Norwegian Encore
Pictures of Norwegian Encore
What Is the Largest Disney Ship?
Weaving 'Herstory': Q&A With the History-Making International Women's Day Cruise's Female Officers on Celebrity Edge 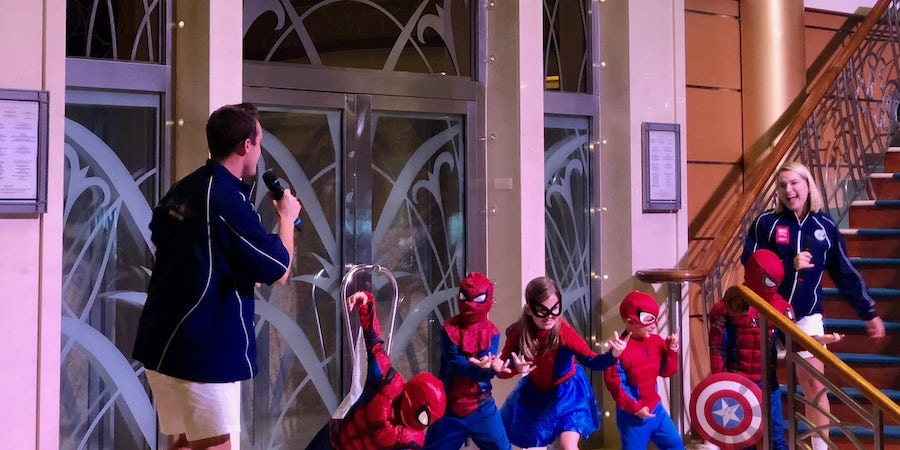 What Is Marvel Day at Sea on Disney Cruise Line

Everyone has a little superhero in them, kids and adults alike. Tap into your inner power (not to mention your inner child) through Marvel Day at Sea, a themed day of comic-oriented fun that takes place on select Disney Cruise Line sailings.

What Is Marvel Day at Sea?

Disney bought Marvel Entertainment and all its breakout franchises both in print and onscreen such as Captain America, Iron Man and the rest of The Avengers back in 2009 and have been incorporating the beloved superheroes into their theme parks, resorts and, yes, Disney Cruise Line's very own cruise ships ever since.

Female superhero Captain Marvel joined the team in 2019, and the Marvel Cinematic Universe (MCU) similarly expanded on its girl power when Shuri became the new Black Panther in 2022

And although it does not host Marvel Day at Sea, Disney's latest cruise ship, Disney Wish, even showcases the fully-themed Worlds of Marvel restaurant.

Exclusively available on select sailings aboard Disney Dream, Marvel Day at Sea is a daylong celebration of the characters, with activities that run from morning until night.

What we like best about Marvel Day at Sea is that there are so many activities, with things for kids of all ages, as well as adults. We also like the complete takeover of the ship -- you'll hear moody action film scores playing throughout the atrium and spilling into cabin corridors. And finally, we appreciate that there are quiet activities for the comic-loving introverts to chill out and simply read vintage issues or draw.

Our advice: Plan ahead for all of the fun to be had, and don’t forget to bring your costume with you if you enjoy cosplay among fellow fans.

Marvel Day at Sea Onboard Programming

Sample activities aboard Disney Dream's Marvel Day at Sea include popular meet-and-greets (of course), and the lineup of characters onboard is substantial and growing. Classics like Spider-Man, Iron Man, Captain Marvel, Thor, Loki and Black Widow can always be expected. New for 2023 will be not only Captain America Sam Wilson, Mighty Thor, Shang-Chi, Ms. Marvel, Ant-Man and the Wasp, Kate Bishop, but also Shuri as the new Black Panther.

Okoye, general of the Dora Milaje, will also be newly on hand for a special "Warriors of Wakanda" interactive training event. Further training sessions are available with Captain America Steve Rogers, Black Widow, Hawkeye and Kate Bishop in the children’s club and upper decks.

Elsewhere around the ship, guests can partake in costume contests, super fan trivia game shows, maybe even a lecture from a Marvel executive (as we experienced) and constant showings of MCU films and TV shows in the ship's onboard theater, cinema and up on the ship's outdoor movie screen, Funnel Vision, poolside.

Three unique shows also take place during Marvel Day at Sea. The earliest one, a magic show -- "Strange Academy: A Spellbinding Spectacular" -- featuring Dr. Strange, as well as Agatha Harkness, the witch from "WandaVision," and Sorcerer Supreme Wong in the Walt Disney Theatre is oriented toward younger children. Around dusk, there's a "Mickey and Minnie’s Super Hero Celebration" that stars Mickey and the gang, all wearing special Marvel-themed apparel for a deck party.

Finally, the enhanced multiverse-spanning "Heroes Unite" show offered in the evening is an extravaganza, with all of the heroes in one place, as well as a few villains. Fight scenes, convincingly augmented by special effects, ensue, followed by a triumphant fireworks display (on par with Disney’s outstanding "Pirates of the Caribbean" varieties). In true Disney fashion, good always triumphs over evil.

Even later at night, and just for adults, the Fathoms nightclub converts into the fun "Ravagers Dance Party" with Star-Lord and Gamora getting in on the act and inviting patrons to participate. Can you say, “Dance off”?

In Disney Dream's trio of rotational dining rooms, menus are playfully printed to look like comic books, and the fare for the evening is inspired by Marvel’s destinations and super-heroic personas. Consider, for example, a Wakandan Piri Piri (inspired by "Black Panther") appetizer and an entree of Mjolnir Meatballs and Pasta (a la "Thor").

One of the best things about Marvel Day at Sea is that all the activities are free. For some special characters, such as Groot (from "Guardians of the Galaxy"), you may have to sign up in advance, but it's still gratis and there are plenty of characters available during the day for photos if you didn't plan ahead.

While the meet-and-greets are free, the professional photos that you might buy aren't (photographers will take cellphone photos for you, but the lighting isn't as good). And with shops full of Marvel costumes, T-shirts and other paraphernalia, you might find yourself spending more than you thought you did.