You may also like
Dismiss
Royal Caribbean's Chops Grille vs. Giovanni's Table
6 Reasons to Go on a Ruby Princess Cruise
Chops Grille on Royal Caribbean Cruises (Plus Menu)
Crown Grill on Princess Cruises (Plus Menu)
Ovation of the Seas: Designed for China
Top 10 Things We Love About P&O Cruises' Ventura
8 Things You'll Love About Celebrity Edge
8 Reasons to Cruise on a Refurbished Ship
48 Hours in Auckland Before or After a Cruise
48 Hours in Brisbane Before or After a Cruise 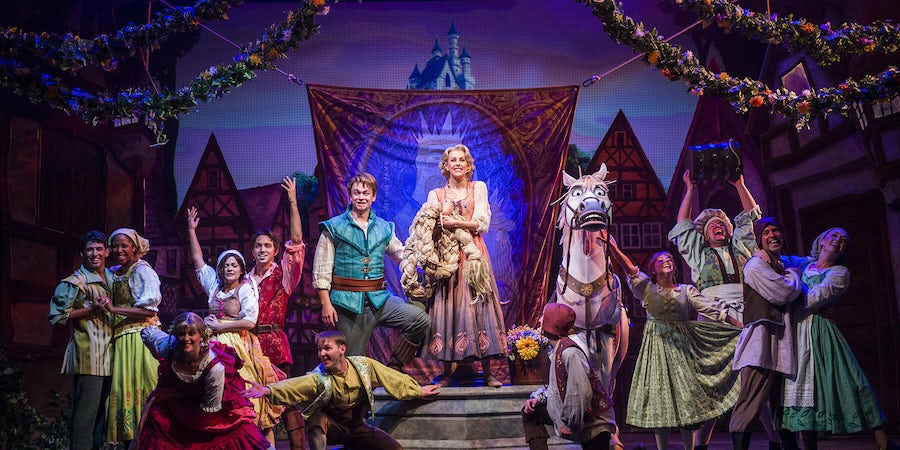 Disney's embrace of all-things "Tangled," the 2010 animated film that has a particular following among millennials, reaches an apex on Disney Magic with an entire restaurant dedicated to Rapunzel. Passengers eat in the complimentary restaurant as part of their dining rotation -- and have the extra benefit of seeing a show too.

The sun-embossed lanterns that draw Rapunzel to leave her tower are the focal point of the restaurant, located on Deck 3 aft; hundreds of them hang from the ceiling, giving the space a magical feel when you walk in. Long tables and medieval decor add an Oktoberfest-meets-Renaissance-Fair vibe. It's all appropriate, given the fairytale Rapunzel hails from Germany (in the movie, the fictional kingdom is named Corona).

On Disney Magic, your waiters follow you to each restaurant every night, changing outfits each time. At Rapunzel's Royal Table, they don purple vests, similar to the color of the lead character's signature dress.

A long center aisle divides the room, which is anchored by a stage at one end. This is where the bulk of the musical performances take place. Note: If you're at a table on the edge of the room, it will be much harder for you to see and hear what's going on. The songs themselves come from "Tangled," and feature the Thugs, hero Flynn Rider and, of course, the long-haired title character.

While we loved the look of the restaurant and the lantern decor, all in all we found ourselves having a bit of Rapunzel overload on the ship, which also has the "Tangled" musical and a "Snuggly Duckling takeover" of O'Gill's Pub once per cruise. It's hard to be churlish, though, when the cast members are this talented and game for interaction. If your kids haven't had their photo taken with Rapunzel yet, that can be remedied at the Royal Table -- and maybe they'll even get to dance with her.

The vaguely Germanic ambiance is carried out in the menu through dishes such as potato cream soup; Oktoberfest lemon and thyme roasted chicken and the "Flynn Rider Platter" of roasted pork loin with smoked pork belly, red cabbage and potato dumplings. Pretzel bread with whole-grain mustard dip is placed on the table.

Overall, the menu is rather heavy, particularly compared to the two other restaurants onboard (Luminere and Animator's Palate). If you're looking for lighter fare, there are two salads; a green asparagus and broccoli soup; a lobster salad; and the always available roasted chicken breast or oven-baked salmon. Two vegetarian entrees are available. The menu also notes dishes that are gluten-free and dairy-free.

Rapunzel's Royal Table is part of the regular complimentary dining rotation on Disney Magic; the meal is included in your fare. On a seven-day sailing, passengers dine in the space twice, and there's a different menu (and music) for each night. On shorter sailings, you'll only go once.