You may also like
Dismiss
Oceaneer Lab and Club on Disney Cruise Line
7 Best Bon Voyage Gifts to Spice Up Any Cruise
AARP Cruises: Discounts on Travel for Seniors (and Everyone Else)
8 Tacky Souvenirs Not to Buy on Cruises
7 Great Cruise Stocking Stuffers
How To Spark Joy on Your Next Cruise: KonMari Your Cabin
6 Best Magnetic Hooks and Door Magnets for a Cruise
10 Best Mother's Day Gifts for Cruise Lovers
12 Most Essential Travel Baby Supplies You Need on a Cruise
Best Gifts for Cruise-Lovers 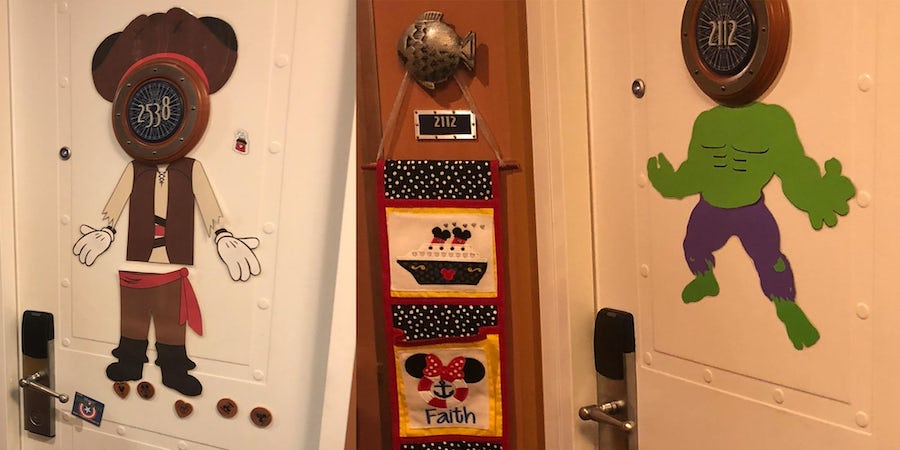 On a Disney cruise, passengers are always looking for more pixie dust to make the sailing extra personalized and special. Fish extenders (also known as FEs), are hanging gift bags, usually embroidered with the names of the family members traveling together, that are hung from small metal fish, used as mailboxes to receive info and dinner invitations by the cabin stewards, located next to the cabin doors. Passengers enter Secret Santa-style drawings, usually organized through Disney message boards or Facebook, and deliver small gifts to the other people in their group. Beyond getting cute trinkets or magnets, the idea is to foster camaraderie, spread the Disney magic -- and maybe even make some new friends onboard.

Our introduction to the world of FEs began when we signed up for a message group created around a spring break sailing on Disney Magic, our first Disney cruise. Suddenly, we faced acronyms and a level of organization we had never seen in our cruising career. What were all these group spreadsheets, most of them created over a year in advance? How could we participate? And where would we possibly find our own fish extender, given our general lack of crafting expertise?

Related: Theme Cruises: What You Need to Know

Luckily, our friendly message board helped us with the answers. The organizer of the group told us that, yes, there was still plenty of time before the sailing to join a gift exchange. After reviewing the choices, we went for the low-pressure magnet group. Other choices were a Christmas ornament group and a family toy group (the adults-only FE group, which we imagined handing out Disney-themed wine corks and beer cozies, was already closed). Groups were capped so no one had to buy too much (although one person in the toy exchange required a separate suitcase for their gifts!) The number of people can vary; we've heard of some FE groups of over 100!

Once we were put in an FE group, it was time to think about our gift bag. With nil crafting skills of our own, we examined the selection on Etsy before our friend's mom saved us by making one for us. She also made the magnets, saving us a purchase on Amazon, as well as cute Mickey and Minnie door decorations. Score!

After boarding, we hung out our FE with smug satisfaction and waited for the gifts to roll in. The first night, we received a cute surprise when several wooden magnets popped up on the door. These fizzles of excitement occurred often during the first few days -- and we felt like little elves when we returned the favor, placing magnets on the door list we received from the FE organizer. Pixie dust, indeed.

Related: 6 Best Magnetic Hooks and Door Magnets for a Cruise

Besides the magnets themselves, we realized that what we like best about the fish extenders was their organic nature. The cruise line doesn't organize, influence or monitor FEs. They come from the passengers themselves. In a way, it reminds us of Cruise Critic itself, with which people share their cruise experiences with others so everyone can have a great time. Plus, now we have enough Disney-themed magnets to fill up a refrigerator panel. Next time, we're going for ornaments.

The FE culture is driven by DIY, and any crafting skills you might have will come in handy as you build your family's bag. That being said, you can always order an FE -- even one that's personalized for your family -- through Etsy for $10 to $25; the more elaborate the design, the more expensive it will be. Either way, make sure you give yourself enough time to have the FE in hand before your cruise.

Related: What Not to Forget On a Cruise: 13 Things to Remember to Pack

The cost of the gifts you give out will depend on what kind of group you've joined and how big it is. Exchanging magnets is the low-stress way to participate, as even Disney-themed ones are relatively inexpensive. An ornament exchange is a little more difficult, considering that you not only have to order the ornaments ahead of your cruise, but you have to make sure they don't break on the way down (or back). An FE that's toy focused will obviously require even more time and monetary investment, not to mention space in the suitcase (on the other hand, receiving larger presents in their gift bags will certainly delight your children more). Only you can determine what fits your interest and budget.

Fish Extender groups aren't officially set up by the cruise line; rather, it's the passengers who set it up among themselves. So, whether or not your ship will have an FE exchange depends on whether passengers have taken it upon themselves to organize one on your sailing. If you'd really like to get an FE going, why not begin by signing up for a Cruise Critic Disney Roll Call?