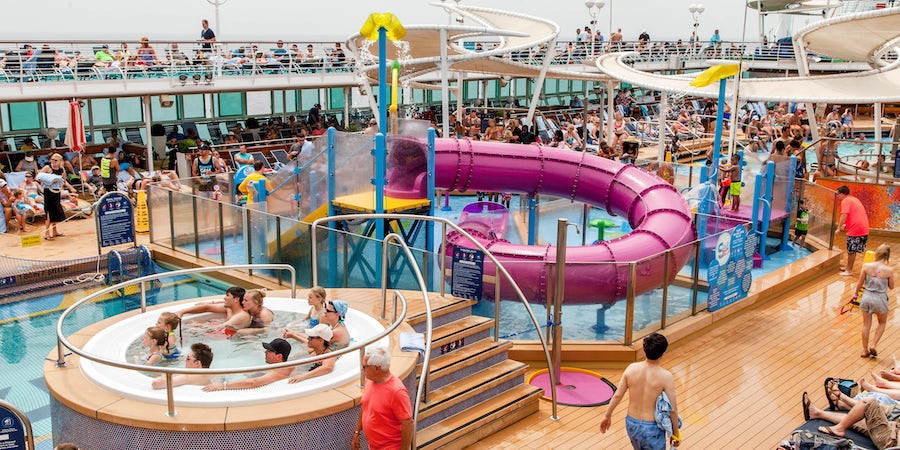 From an early age, children display an unmistakable fondness for splashing around in the water -- which is why cruise ship water parks have become fabulous features for the younger set. Royal Caribbean started adding water parks to select ships in 2006 with the H2O Zone, which first debuted on Freedom of the Seas. Ten years later, in 2016, the line changed up the design and launched Splashaway Bay on Harmony of the Seas; it's now been added to five more ships. While both interactive aquatic playgrounds share a few elements, they are more different than alike. Read on for our comparison.

Both H2O Zone and Splashaway Bay on Royal Caribbean cruise ships offer shallow pools for wading in, deeper pools for older kids, water geysers or fountains for running through and spray cannons for getting new friends wet. Additionally, both water parks are always located on the main pool deck. But, that's about where the similarities end.

Splashaway Bay on Royal Caribbean feels more compact than the H2O Zone, with all its main elements linked together and a huge tipping bucket as the focal point. And, while Splashaway Bay does offer a few fountains and spray cannons, the main attractions are the water slides. The number of water slides in Splashaway Bay varies by cruise ship, with some having one slide for the bigger kids and a second for toddlers, while others have two big ones and a third small one. (On all ships, children must be at least 42 inches tall to use the big slides.)

Splashaway Bay also features an adjacent baby splash zone that is appropriate for babies and toddlers in swim diapers. This space typically features ankle-high water, a small slide and a variety of splash apparatus.

H2O Zone, on the other hand, is more of an oversized baby and toddler splash zone, with lots of shallow water spaces for kids to jump around in and colorful sculptures dotting the area that can be climbed on, rain down or spray water on kids below, or are simply for decoration. Spray cannons, water geysers and one or two deeper pools (about 3.5 feet in depth) for bigger kids round out the space. The shallowest areas are open to babies and toddlers in swim diapers.

Choose a Royal Caribbean ship with the H2O Zone if you have kids still in swim diapers as this water park offers the littlest cruisers more of the water park attractions that are appropriate -- and safe -- for them. On ships with Splashaway Bay, those in swim diapers will be relegated to one small section of the larger play area.

Choose a ship with Splashaway Bay if you've got older kids (say 8 to 15), as the slides and tipping bucket will be more interesting to them than running under a bright red and blue, mushroom-shaped water fountain.

The H2O Zone can be found on the following Royal Caribbean cruise ships:

See pictures of the H2O Zone on Freedom of the Seas.

Splashaway Bay can be found on the following Royal Caribbean ships:

See pictures of Splashaway Bay on Liberty of the Seas.