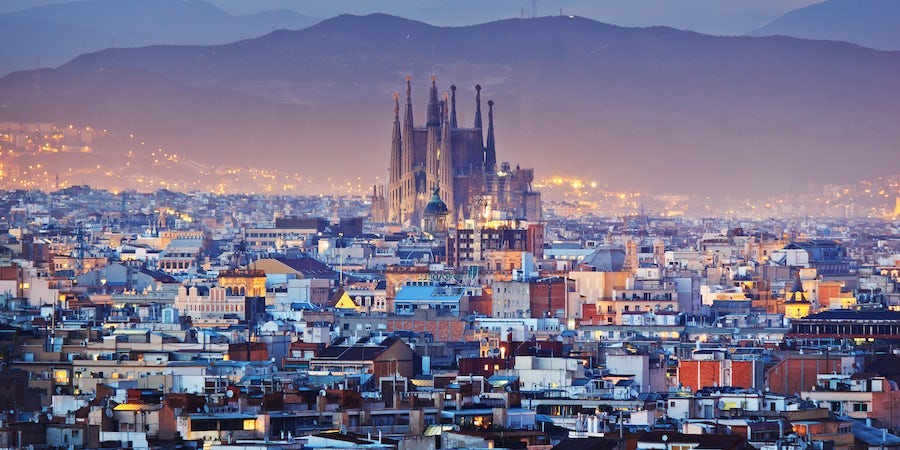 Terminals North, South (for the largest small ships) and East (for the smallest ships)

The Port of Barcelona is a vast complex of buildings and terminals befitting the city's status as one of the most popular cruise destinations in the world. With its eighth terminal scheduled to open in 2018, you might visit a new terminal each time you arrive or depart. Amenities vary at each terminal, but each facility is modern and climate-controlled, and most have a restaurant, souvenir store and duty-free shopping. No matter where your ship docks, the heart of the city's Barri Gotic, or Old City, is a 10-minute shuttle ride away. You'll be dropped off next to the towering Christopher Columbus Monument, which marks the spot where the explorer shoved off from Spain. The monument, which has a tourist information office inside and a lookout point at the top, sits at the base of the leafy La Rambla pedestrian boulevard. That's the heart of the city's tourist sector and a worthy first stop whether you have a few days or only a few hours to explore. Smaller ships might dock at the closer World Trade Center, which is about a 10-minute walk from the monument.

From the North (Girona/France): Take the E-15/AP-7 highway toward Barcelona and continue onto C-33. Exit toward Barcelona Rondes/AP-2/AP-7 and merge onto B-10. Take Exit 21 toward Ciutat Vella and park at the World Trade Center Barcelona.

From the West (Madrid/Basque Country): Take the AP-2 toll highway to AP-7 and continue onto B-23. Take Exit 5 to merge onto E-90 toward Barcelona. Take Exit 21 toward Ciutat Vella/Paral·lel and continue onto Passeig Josep Carner. Take a right onto Moll 18A Barcelona, the World Trade Center.

From the South (Valencia/Tarragona): Take the E-15/AP-7 toll highway north toward Barcelona until you merge onto C-32. Take Exit 16B to merge onto Ronda Litoral/E-90/B-10 toward Barcelona/Port. Take Exit 21 toward Ciutat Vella/Paral·lel and continue onto Passeig Josep Carner. Take a right onto Moll 18A Barcelona, the World Trade Center.

Getting to the Cruise Terminal from the Airport

By car, the ride from Barcelona–El Prat Airport to any of the cruise terminals takes about a half-hour (some budget airlines also fly to Girona–Costa Brava Airport, about 90 minutes north). The route follows the same directions as listed above from the south of the city.

Neither Uber nor any other ride-sharing service is available in Spain, having been banned by the government in 2015 after protests from the taxi industry. A smartphone app that hails taxis is inconvenient and unnecessary given the amount of cabs that are available on the street.

There is a dedicated cruise passenger shuttle, technically the T3 line but nicknamed the Blue Bus, which runs between Terminals A through E and the Columbus Monument in about 10 minutes. They come about every 15 minutes, but the schedule varies by demand. The price is 3 euros one-way, or 4 euros round trip. Many cruise companies whose ships call on Barcelona mid-voyage will also offer free shuttles that will pick you up and drop you off at the same place, so check to see whether transportation is included. If your ship docks at the World Trade Center, you won't need the shuttle since points of interest are within walking distance.

It's particularly inconvenient to take public transit directly from the airport to the cruise port, so it's best to take a taxi or shuttle. If you're coming from elsewhere in the city, the closest metro stop is Drassanes on the green L3 line, which sits at the foot of La Rambla. One ride costs 2.10 euros, or you can buy a 10-ride pass for 10.20 euros and share it with other passengers. Once you arrive at the Drassanes station, you'll still have to catch the blue cruise shuttle bus, which is about a five-minute walk away, or take a 15-minute taxi ride for about 10 euros.

Getting There by Train

Most trains -- including the Spanish high-speed AVE and Renfe lines, as well as French SNCF -- will arrive at the modern Barcelona Sants station (Placa dels Paisos Catalans, 1-7, 08014) in the north of the city. It's about a 20-minute taxi ride to the cruise terminal. Regional trains can arrive at any of three other train stations in the center of town: Placa de Catalunya, Estacio Franca or Passeig de Gracia. A cab would be the best option to your ship from any of the train stations.

An Avis office is located in the World Trade Center, and a Sixt rental office (Carrer Palaudaries, 5-7, 08004) is about a five-minute walk from the Columbus Monument. The closest offices for all other major rental agencies are located about a 20-minute taxi ride away at the Barcelona Sants train station.

Long-term parking for any terminal is located at the World Trade Center Barcelona for 25 euros a day, 75 euros for three to seven days, 85 euros for eight days and 10 euros for each additional day. The lot is indoors with 24-hour security and optional car-washing services. Be aware that parking here will still require taking the blue shuttle to Terminals A, B, C, D and E. You can reserve parking ahead of time by visiting the website for World Trade Center Barcelona.

Porters are available at every terminal on embarkation days.

It's recommended to arrive at your ship two hours before it's is scheduled to depart, although this might differ based on instructions from your cruise line.

Wheelchairs are available, but to guarantee the proper transportation, it's best to arrange mobility assistance through your cruise line.

Where to Eat or Shop Near the Barcelona Cruise Terminal

Because the cruise port is so big, it is separated from the city center, meaning that the immediate area is mostly industrial. Hop on a shuttle for a 10-minute ride to the bottom of La Rambla and wander around the vendors that line the waterfront. You'll find some sellers of standard cheesy souvenirs and knockoff purses, but there will also be handmade leather goods, interesting crafts, antiques and other notable items. For a bite close by, find Ample Street (Carrer Ample), where a two-block stretch has a number of fantastic restaurants mixed in with small stores. The family-owned Safra 18 (Ample, 18) offers traditional Catalan cuisine with modern touches in a dining room with exposed stone walls. The Chicken Shop/Dirty Burger pairs creative cocktails with delicious rotisserie chicken. For dessert, stop by Papabubble (Ample, 28), a candy shop founded here in 2004 that now sells sweets around the world. And, for a distinctive

Each terminal has numerous bathrooms on the ground floor.

Only the newest terminals, D and E, have Wi-Fi access.

There is no luggage storage available at the Barcelona cruise port, but they do have a partnership with Bags&Go, a private company that transfers luggage to a hotel, the airport or train station, starting at 12 euros.

You'll find ample seating in any of the terminals, as well as a restaurant or bar where you can relax and linger over a coffee (try a cafe con leche). Some even have VIP lounges and children's zones.

More Tips About the Barcelona Terminal

Unless you dock at the World Trade Center, don't bother walking from your ship to the city. The path from the closest berth will take at least 45 minutes over a steep, highway-like bridge that does have a sidewalk but also has cars speeding by. The view might be nice but go to the top of the Columbus Monument instead for views of the city and of Montjuic, a large hill where a castle and the Olympic Stadium still sit.

Once you get to La Rambla, take a stroll to see the fabulous array of street performers (the phenomenon of living statues originated here). But, don't plan on eating at any of the restaurants that line the boulevard. As a rule, the mediocre food will be double the price. Instead, walk for about 10 minutes and find Placa Reial on the right side. There are a number of good restaurants there, with all the people-watching you'd get on La Rambla. Try to find a spot in the sun at affordable Les Quinze Nits in the far-left corner.