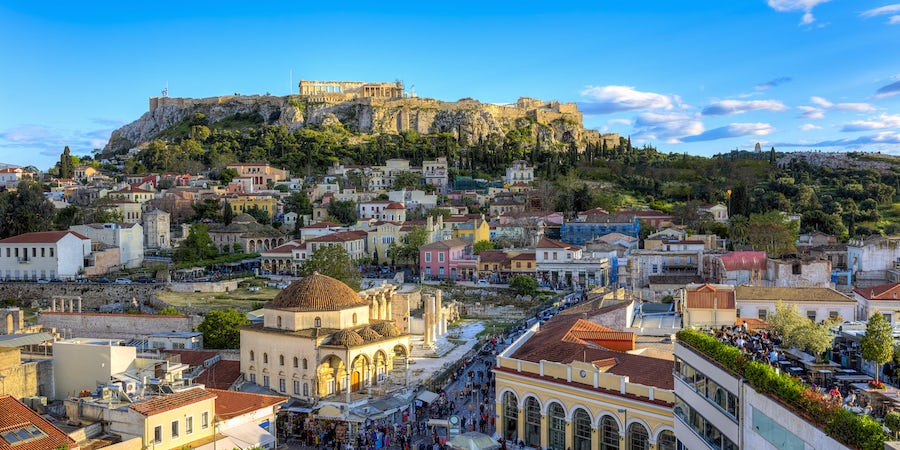 Athens (Piraeus) (Photo:Anastasios71/Shutterstock)
Carolina Pirola
Contributor
The Port of Piraeus is one of the largest passenger ports in Europe. The port’s three cruise terminals are all a 20- to 30-minute taxi ride from the heart of Athens, depending on traffic. The port is also a major departure point for ferries to the beautiful Greek islands.

The Port of Piraeus has three cruise terminals within walking distance from each other: Miaoulis A, Themistocles B and Alkimos C. Where a cruise ship will dock strongly depends on traffic and size of the ship. Be sure to check your boarding documents to ensure you go to the correct terminal. There is also a free shuttle service between the terminals.

From the North (Central Athens via Leoforos Athinon Pireos/56):

Take Leoforos Athinon Pireos towards Astiggos. Make a left on Athinon and continue until you get to Agios Dionisiou, where you’ll make a left onto Retsina and then a right onto Kononos. Turn left on Akti Kondili and keep right at the fork. The port will be on your left.

On EO8, take the exit towards Leoforos Schristou Skaramagka. Keep right at the fork to take Grigoriou Lampraki. At the end of the road, turn left to continue on Leoforos Dimokratias.

Make a right onto Akti Ionias and again at Mpoupoulinas then immediately turn left to continue on the Drapetsonas ringroad, which will turn into Akti Ietionia. Take the ramp on the right towards Gate 2/Dodecanese and follow signs for Port of Piraeus. The port will be on your left.

From the South (via Glifada and the Athens Beaches/91):

Take Leoforos Apollonos/91 and keep left at the fork to stay on Leoforos Poseidonos, which will turn into Mikras Asias and later into Alipedou. Make a slight right onto EO56 until you reach Kononos. Turn left on Akti Kondili and keep right at the fork. The port will be on your left.

Parking is not available at the cruise terminals. However, there are many parking options at private lots nearby. There are several lots on Akti Miaouli Street, including one operated by PolisPark that's opposite Agios Nikolaos Church. From there, it’s just a short walk to the cruise terminals.

Getting from Athens International Airport (ATH) to the Port of Piraeus

Public Transit from Athens International Airport to the Port of Piraeus

The Express Bus X96 covers the route from Athens International Airport to the Port of Piraeus.

It is also possible to get from the Athens airport to the Piraeus cruise port by the Piraeus metro, though the stop that serves the port is a bit far from the cruise terminals. The best option is to take Line 3 to Monastiraki and transfer to Line 1. The stop closest to the metro is Piraeus. From there, you can change to the 843 or 859 buses, which shuttle between the cruise port and the metro.

Alternatively, taxis are available for the quick and direct trip between the metro and the cruise terminals.

Transport tickets can be purchased at electronic kiosks, at a ticket booth inside the metro or at an outdoor street kiosk called the periptero. Remember to validate your ticket before boarding.

Athens International Airport Taxi Service to the Port of Piraeus

Athens International Airport Eleftherios Venizelos (ATH) is about a 40-minute drive from the Athens cruise port.

Taxis are readily available at Exit 3 of the Arrivals Level, as are shuttles and rideshare services such as Uber.

Restaurants Near the Port of Piraeus (Plus Shopping and Other Services)

The Port of Piraeus has a refreshment area and duty-free shops in Terminal A. The port is also within walking distance to eating and shopping streets frequented by the local working crowd. Small restaurants and cafes can be found on Akti Miaouli Street, and more shopping and restaurant options can be found in the district's main pedestrian way called Sotiros Dios.

If you don't plan to head to Athens, you can opt to take a quick taxi ride to the nearby scenic harbors of Piraeus, which have excellent by-the-sea dining options. There are also many open-air cafes and Greek taverna options in the Piraeus harbor called Zea Pasalimani, which is also reachable via a quick taxi ride.

Train Service to the Port of Piraeus

While there is no direct train service to the Athens cruise port, it is possible to get to Athens from most major cities in Greece by train. The Athens Train Station is located in the city center. To get from there to the Port of Piraeus, the easiest and fastest option is to take a taxi. The ride takes about 20 to 35 minutes, depending on traffic.

Train tickets can be purchased online or on arrival at the station of origin.

Wheelchair and Accessibility at the Port of Piraeus

There is no wheelchair service available at the Piraeus cruise port. To guarantee the proper transportation, arrange mobility assistance through your cruise line.

Porters and Red Caps at the Athens Cruise Port

Porters are available on embarkation and debarkation days at the Athens cruise port.

Bathrooms at the Port of Piraeus

There is a bathroom facility in each cruise terminal.

Free Wi-Fi is available at the Port of Piraeus.

There is seating throughout the terminal. However, it can get very crowded during port calls.

Luggage Storage: Luggage storage and lockers are available in Terminal A.

Rental Car Services: Major international and local rental car companies run offices near the cruise terminal. Many of them can be found on Akti Miaouli Street, which is a very short walk from the port.