Part of what makes a Carnival Cruise Line vacation such a great value is how much is included in the cruise fare -- including all of the main theater entertainment. With just two exceptions (Carnival Triumph and Carnival Victory), all ships in the Carnival fleet offer two to four selections from the line's Playlist Productions collection of big-stage productions. These short (30 to 35 minute) shows are always full of energy; usually featuring lots of lighting, lasers and special effects; and span a number of genres from '80s hits to rock anthems to Latin vibes to R&B.

But which ships offer which shows? To help you plan your evenings, Cruise Critic has tracked down all of the Carnival Cruise Line mainstage production shows (not including acts like magicians, Lip Sync Battle or special guests), including a brief description and which ships you'll find them on.

Get ready to rock with this explosive song and dance spectacle featuring hits from folks like Bruce Springsteen, Journey, Aerosmith, The J. Geils Band, The Cars, Pat Benatar and even Blondie. A live six-piece rock band amplifies the show.

It's a Havana night with this lively show that features a mix of classic Cuban songs and popular contemporary Latin hits -- such as "Fireball" by Pitbull and "I Need to Know" by Marc Anthony -- as well as beautiful costumes and turned-up dance routines.

New Orleans has a sound all its own, and this show does the city justice with song-and-dance numbers from Etta James, Tina Turner, B.B. King, The Platters and others -- and, of course, there's a version of "House of the Rising Sun" featuring a voodoo king.

Boy meets girl in this "love" story that also pays tribute to the musical invasion of British artists in the 1960s through '70s, including The Beatles, The Who, Elton John, Herman's Hermits and others.

Nothing is yet known about this show that will appear on Carnival Horizon when it launches in April 2018.

Follow "The Ramsey Boys" as they head out on a country concert tour singing contemporary hits from artists that include Blake Shelton, Rascal Flatts, Patsy Cline, Florida Georgia Line and others. 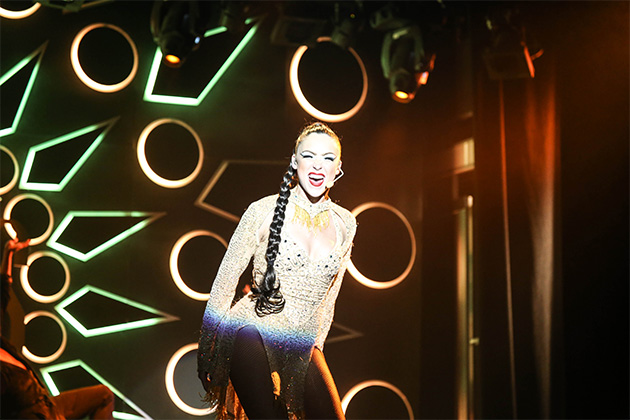 It's all about the ladies at this show that offers a mix of fashion and dance to a soundtrack of popular female artists -- all of whom you'll know just by their first name -- including Beyonce, Barbra, Celine, Cher, Madonna and Whitney.

One of Carnival's most theatrical and high-tech shows, Flick is an homage to the music of the movies that is as much about the songs from Dirty Dancing, Titanic, Willy Wonka, James Bond, Star Wars and others as it is about the show's special effects.

Travel back in time to the era of the 1960s beach movie with special effects and tunes that invoke the beach vibe. Featuring songs from Jimmy Buffet, Bob Marley, the Beach Boys and more.

A compilation of R&B and soul's greatest hits from a host of legendary singers including Aretha Franklin, Stevie Wonder, Otis Redding, Ray Charles, Al Green and others. In a fun twist, six couples are chosen for a VIP experience with special seats, Champagne and flowers.

A musical tour through the pop hits that brought Latin music and dance to the masses, including favorites from Gloria Estefan, Enrique Iglesias, Jennifer Lopez, Santana and Shakira.

This collection of song-and-dance routines showcases the music of the United States across the years and across genres, from the '20s to today, and from pop to country/western.

The cool sounds of Motown R&B are the centerpiece of this show, with soul and pop hits from Lionel Richie, Martha and the Vandellas, Marvin Gaye, Stevie Wonder and The Supremes all featured.

Very little is yet known about this edgy show featuring soul and R&B hits that will appear on Carnival Horizon when it launches in April 2018. 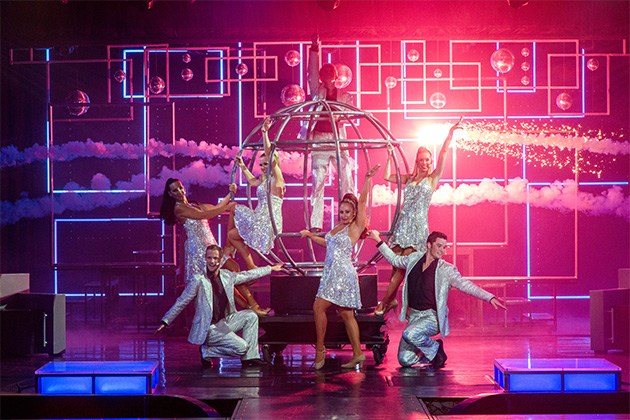 A musical tribute to the era of Studio 54 and Soul Train, this music-and-dance extravaganza showcases the glittery '70s with hits from KC and the Sunshine Band, Donna Summer, Barry White, Parliament and more. In a fun twist, a few lucky audience members are selected to join the singers and dancers on the big stage.

Nothing is yet known about this show that will appear on Carnival Horizon when it launches in April 2018.

Follow along as an old-time roadie reminisces about his days on the road with such greats as Elvis, The Beatles, The Rolling Stones, Elton John, Bob Seger, Huey Lewis and others.

A musical journey around the world from Europe to Asia to Africa, and even to Antarctica, where penguins dance to "Putting on the Ritz."

The Free Cruise Offer: Scam or Legit?
Thank you for your interest in Royal Seas Cruises on Ticketmaster. You will soon be receiving a call to book your free Bahamas cruise. Can't wait? This seemingly simple sales pitch began a yearlong journey of phone calls, complete with lightning-fast decisions, scheduling and hand-wringing, as I attempted to determine whether the free cruise offer was a scam, legit or something in between.
8 Overrated Activities in the Caribbean
Here are 8 overrated activities you might encounter during Caribbean cruises that you can easily skip.
Unsold Cruise Cabins: How Cruise Lines Fill Them and How You Can Snag One
Getting a deal on a cruise sailing that's not selling well requires some effort -- and usually a lot of flexibility. To take advantage of the opportunity empty cruise cabins present, you must understand how cruise lines go about filling them.
7 Dumbest Cruise Mistakes Ever
We've all been there: almost getting your Romanian spouse forcibly debarked -- and expatriated; sprinting through the St. Thomas jungle to catch your departing ship; eating three of Guy Fieri's 1,000-calorie burgers in one sitting. Perhaps not, but as Bram Stoker wrote in Dracula, "We learn from failure, not from success!" What has failure taught Cruise Critic's editors and contributors when it comes to cruising? Do your homework on visa requirements, and triple check that you know how to get where you're embarking. Be careful what you eat and what you book. Read our seven mini-stories of supreme stupidity, have a laugh at our expense, and vow never to make the same mistakes.
Best Time to Cruise
It's one of the most common cruising questions: When is the best time to cruise Alaska, Australia, the Caribbean, Canada/New England, Hawaii, Europe or the South Pacific? The answer depends on many variables. For example, fall foliage enthusiasts will find September and October the best time to cruise Canada/New England, whereas families prefer to sail in summer when temperatures are warmer for swimming. The best time to cruise to Alaska will vary depending on your preferences for viewing wildlife, fishing, bargain-shopping, sunshine, warm weather and catching the northern lights. For most cruise regions, there are periods of peak demand (high season), moderate demand (shoulder season) and low demand (low season), which is usually the cheapest time to cruise. High season is typically a mix of when the weather is best and popular travel periods (such as summer and school holidays). However, the best time to cruise weather-wise is usually not the cheapest time to cruise. The cheapest time to cruise is when most travelers don't want to go because of chillier temperatures or inopportune timing (too close to holidays, the start of school, etc.). But the lure of cheap fares and uncrowded ports might make you change your mind about what you consider the best time to cruise. As you plan your next cruise, you'll want to take into consideration the best and cheapest times to cruise and see what jibes with your vacation schedule. Here's a when-to-cruise guide for popular destinations.
12 Bad Decisions That Could Ruin Your Cruise
Don't let it be your fault that your sailing turns sour. Any of these 12 bad decisions could ruin your cruise. We're here to help you say no so you can save your vacation.