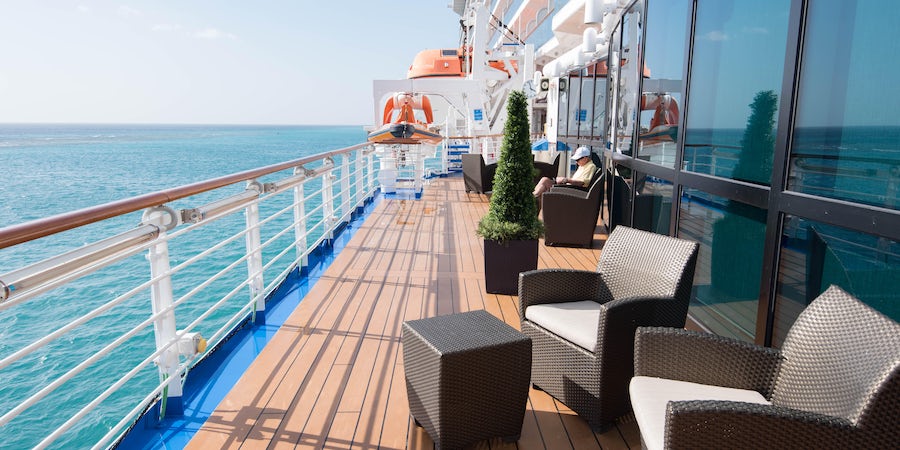 The Royal Promenade serves as the main thoroughfare on some Royal Caribbean cruise ships. This passageway, flanked by bars, restaurants, shopping and entertainment venues, is a microcosm of Royal Caribbean's "wow" factor, and it maintains a light and fun atmosphere all hours of the day and night.

Royal Caribbean's Royal Promenade is the entry point for embarking passengers, typically located on Deck 5, with an extension to Deck 6 on some vessels. Welcoming cruisers right into the middle of the action, this area is one of the busiest hubs on any Royal Caribbean ship that has it.

Cruisers can sample the line's food and drink at any of the 10 restaurants and bars that line the Royal Promenade, including the novel Rising Tide bar, the first moving bar at sea; Champagne Bar; Mondo Coffee Bar; or Boleros Latin dance club. On Oasis-class ships, this is also where you will find robot barkeeps at the Bionic Bar or tremendous views from the mezzanine level at the Schooner Bar.

Cruisers' food favorites that line the indoor boulevard include Sorrento's pizzeria and Cafe Promenade for a solid -- and complimentary -- cup of joe, 24/7.

Browse more than a half-dozen shops, including designer brands like Kate Spade; the two-level Focus photo shop and gallery for family portraits, port pictures and photo accessories; and plenty of stores, like Port Merchants, for logo wear and everyday items you might need.

Parades and parties are an integral part of the Royal Promenade experience and range from casual theme nights to full-on productions like "Move It! Move It!" featuring DreamWorks cast members from "Shrek" to "Madagascar" and "Kung Fu Panda." (Which parades you'll get varies by ship.) Bands perform throughout the day and performances pop up from the entertainment team all evening long.

The Royal Promenade is not only chockablock with places to eat, drink and celebrate, but it's also the ship's logistical hub, where passengers can take care of business at the guest services desk, talk to a future cruise consultant or book a tour at the Explorations! shore excursions desk. Additionally, a dozen or so Promenade cabins overlook the space for cruisers who really want to stay near the center of it all.

Considered one of the most happening "neighborhoods" on Royal Caribbean's Oasis-class vessels, the Royal Promenade -- which is nearly twice as wide on Oasis-class ships as it is on Voyager- or Freedom-class ships -- bustles with activity, day and night.

Cruisers can become self-proclaimed pop stars at the On Air Club karaoke bar, while a giant copper globe built into the facade above the Globe and Atlas Pub "cracks open" to reveal the Atlas Bridge, a platform that unfolds 10 feet above the boulevard on hinged hydraulics to create a surprising performance area.

Walking the Royal Promenade is free, but some of the food and most of the drink at the restaurants and bars along the way comes at an added charge.

The Royal Promenade can be found on the following ships:

Check out footage of the Royal Promenade on Harmony of the Seas.