You may also like
Dismiss
Like a Local: New Orleans
Things to Do in New Orleans Before a Cruise
Ohio River Cruise Tips
7 Cool Reasons to Take Mississippi Riverboat Cruises
B.B. King's Blues Club on Holland America
7 Ways to Find Europe Along the Mississippi
Where to Find the Mississippi River Blues
Which Shows Are on Which Norwegian Cruise Line Ship?
Which Shows Are on Which Carnival Cruise Line Ship?
Cruising With The King: The Elvis Presley Cruise 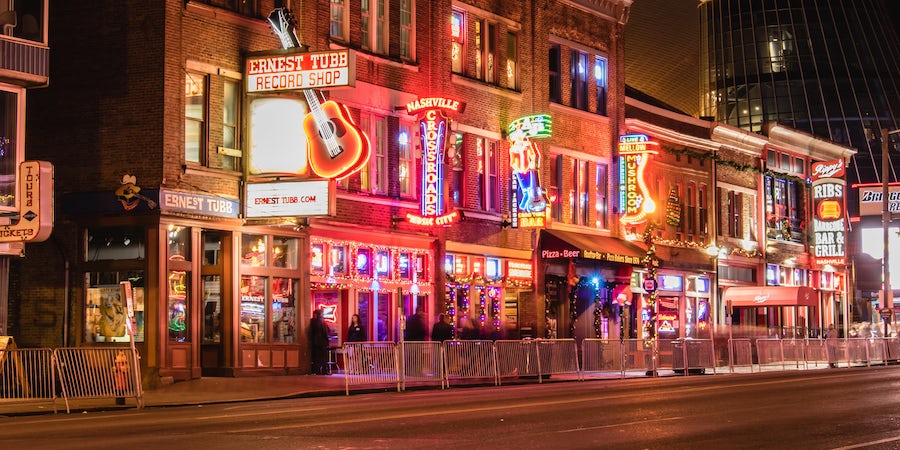 Something about America's rivers inspires songs. Maybe it's the melting pot of river cities, where travelers brought musical influences and instruments from city to city like a boat-borne version of The Music Man (but without the swindling). Maybe it's the music of ship's bells and horns inspiring songwriters to pen lyrics or pick up their instruments and noodle out a new melody. Whatever it is, there's music all along the rivers of America. If you're a music lover in search of a river, a river lover seeking a soundtrack or if you want to get a feel for the culture and history of a place through song, there's a river cruise for you.

Here are some of America's most-traveled rivers and what you can expect to hear while you ply their waters.

Why: With cities like New Orleans and Memphis on the banks of the Lower Mississippi River, do we need to say more? Of course we do. These two cities have such a storied musical past that hundreds of books have been written documenting their part in the roots of jazz and rock and roll; the musical legacies of artists like Louis Armstrong, Elvis, "Fats" Domino, Otis Redding, Booker T & the MGs and B.B. King will never be fully measured. And those four names -- giants in their respective genres -- are just some of the people that mark these cities as music epicenters. Now, how about the places: Graceland, Beale Street and Stax Records in Memphis, and the French Quarter and Bourbon Street in New Orleans.

Cruising the Lower Mississippi puts you in the place where music history is still being made in New Orleans by the likes of Dr. John (influenced by Professor Longhair and Little Richard), Allen Toussaint, The Meters/The Funky Meters/The Meters Experience and the famous Marsalis family. But walk the streets of this town and you're likely to run into a roving band playing New Orleans' endemic brand of funk, blending jazz, rock, calypso, and African rhythms; or a group of bucket drummers (don't laugh, these cats are seriously talented); or some blues guitarist who has plugged into something special. At venues like Preservation Hall and Tipitina's, you'll be tapping your toes to some of the best music the city has to offer.

Related: Things to Do in New Orleans Before a Cruise

In Memphis there's Graceland, Elvis' home, a pilgrimage site for music lovers of many strips, and the place where he cut his first record: Sun Studio. At Sun Studio, stand where the likes of Elvis, Jerry Lee Lewis, Carl Perkins and Johnny Cash all jammed and recorded. Stax Museum of American Soul explores the influence of one of the most popular soul record labels (and the most successful Memphis-based record label at that) and the artists that recorded on the label such as Isaac Hayes, Booker T & the MGs, Wilson Pickett, Moms Mabley, Otis Redding, even Richard Pryor. At the Blues Hall of Fame and Memphis Music Hall of Fame, you'll find there's too much to see and hear as they pay homage to legends like Bobby "Blue" Bland, ZZ Top, John Lee Hooker and Al Green. Speaking of Al Green, if you're in a pious mood and in town on Sunday, you can visit the Full Gospel Tabernacle where none other than the Reverend Al Green preaches, sings and exhorts on the good word, welcoming parishioners and visitors alike. And, you can't miss Beale Street, home of the legendary music festival of the same name and the site of many a bar, restaurant and nightclub where you can hear some of the best musicians around.

One last thing. Be sure to time your cruise right and you'll be in town for either New Orleans' famous Jazz Festival (late April/early May) or Memphis' Beale Street Music Festival (early May). Why: One word: Nashville. This river city is awash in music day and night, and if the tunes in the air along Broadway Avenue aren't enough to entice you into one of the many honky-tonks and bars there, the throwback neon signage will surely do the trick. There's Nudie's Honky Tonk, a bar named for legendary western wear designer Nudie Cohn, The Rhinestone Tailor, where everyone is fully clothed but there is a giant Cadillac hanging on the wall over the main floor stage. Across the street is Robert's Western World, where the music is nonstop from open to close (including a Sunday morning Gospel show) and you can get a $2.50 beer and a pork chop sandwich to refuel you. Three doors down is Tootsie's Orchid Lounge, a honky-tonk that shares a back alley with the legendary Ryman Auditorium.

To say the Ryman Auditorium is legendary is not an exaggeration. This is the longtime home of the Grand Ole Opry, a weekly radio show started in 1925, featuring a mix of country, folk, gospel, Americana and bluegrass artists of the famous and soon-to-be-famous variety. The Grand Ole Opry splits its recording season between the Ryman and the Grand Ole Opry House, a few miles from downtown, and no matter which venue hosts the show when you're in town, it's a show not to miss.

Talented, hopeful musicians come here to hone their already substantial skills in hopes of becoming the next thing, if not the next big thing. Songs escape through the doors and windows of bars, restaurants and honky-tonks on Broadway; buskers and street musicians play on street corners along Broadway and in areas like The Gulch; and major concerts at downtown's Bridgestone Arena – think Garth Brooks, Justin Timberlake, U2 – draw crowds from far across the country.

And if you're seeking some of Nashville's musical legacy, the Country Music Hall of Fame and Museum covers the surprising history of the genre and the Music City Walk of Fame is a small park dedicated to influential musicians of all musical stripes. At the Johnny Cash Museum, you'll come to know The Man In Black, his influences, music and legacy, and upstairs you can do the same for one of country's most beloved ladies at the Patsy Cline Museum. If that's not enough, just keep an eye open while you walk around; you may spy someone on the charts today.

Why: Jazz might have originated in New Orleans and blues in the Mississippi Delta, but as the genres spread north they evolved, developing into distinct styles in their own right. Sailing the Upper Mississippi River, from Memphis to Minneapolis, you're going through the country where these genres took new shapes and where artists helped take them to new places. Several cruises that sail the Upper Mississippi take the Illinois River toward Chicago, where the city's love for blues, jazz and rock keeps clubs hopping.

On the Upper Mississippi, you'll pass St. Louis, where jazz musicians used riverboats as floating concert halls and arenas where they could practice and perfect their art. Artists like Scott Joplin, Frank Trumbauer and Bix Beiderbecke cut their teeth here and pushed each other to develop the ragtime jazz style (denoted by piano-heavy performances and syncopated rhythms; think "The Entertainer," the theme song from the Robert Redford/Paul Newman film The Sting). At venues like BB's Jazz, Blues and Soups; the Blanche M. Touhill Performing Arts Center; Jazz at the Bistro; and at the Chesterfield Wine & Jazz Festival (in late June), you can find jazz just about any time you're there.

St. Louis is also home to a distinct blues style, St. Louis Blues. Musicians like Chuck Berry and Ike Turner come out of this piano-rich style. There are too many exceptional blues venues to develop a comprehensive list, but if you're in town, 2720 Cherokee, Bottleneck Blues Bar, The Blue Pearl, Hammerstone's and Zydeco Blues (where you'll also hear fun Cajun-inspired Zydeco) should be on your list. The early-April St. Louis Blues Festival should also be on your radar.

Further up the river, in Davenport, Iowa, notable ragtime jazz musician Bix Beiderbecke's legacy is celebrated with the Bix Beiderbecke Memorial Jazz Festival every August, and at the festival there are dozens of official shows and even more unofficial shows going on across the city. Why: Along the Ohio River you'll be in literal bluegrass country as you pass by Kentucky's rolling hills and plains (which are also Kentucky's horse country); this is also one of the musically-inclined bluegrass countries. In Owensboro, Kentucky, the International Bluegrass Music Museum celebrates the genre born in the mountains of North Carolina and Virginia (far from any navigable river). Bluegrass is prominent in West Virginia (as is Americana, contemporary and roots country) and in towns along the river in Ohio.

As you travel further up the Ohio River and near Pittsburgh, Pennsylvania, you're entering doo-wop territory. Doo-wop -- that vocal styling favored by groups like The Marcels (of "Blue Moon" fame), The Del-Vikings and The Skyliners (all of whom hail from Pittsburgh) in the '50s and '60s -- was born here, but well before the genre's heyday. Music historians see the "Camptown Races," a song written in Pittsburgh in 1850, as the first of the genre, though it's signature "doo-dah! doo-dah!" chorus morphed into the doo-wop made popular a century later.

Pittsburgh holds dear to this nostalgic genre, and they honor their hometown groups and DJs (whom were among the first to air doo-wop songs) with a number of doo-wop and vocal groups performing across the city throughout the year.