You may also like
Dismiss
Wine on the Rhine: Drinking Your Way Along the Rhine River
Drinking Along the Danube: Wine and Other Drinks to Try on Your River Cruise
Wheelhouse Bar on Princess Cruises
What's New in River Cruising for 2018
American River Cruises for Music Lovers
Things to Do in Southampton Before a Cruise
Oktoberfest River Cruise Tips
10 Reasons to Stay in Seattle Before Your Alaska Cruise
48 Hours in Brisbane Before or After a Cruise 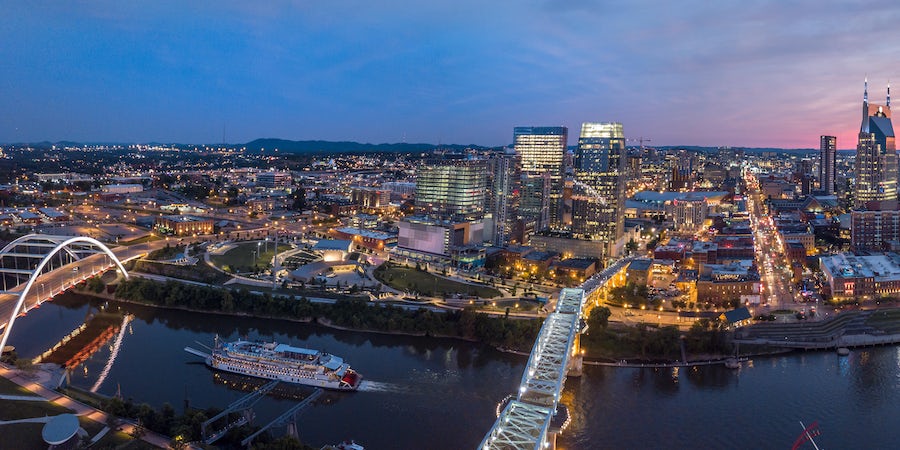 Cruising along the Cumberland River in Tennessee and Kentucky, you'll find the idyllic countryside, charming ports and friendly, "no strangers here," folks you expect to meet in ports small and large. You'll also find time to relax -- read, nap, watch for birds -- to make new friends, and to uncover bits of history and culture along this storied river.

Cumberland River cruises usually start or end in Nashville; the "Music City" deserves a day or two to explore and even longer if you're a country music fan. Otherwise, your cruise will likely take you to small towns that you've never heard of. Paducah has UNESCO World Heritage status for its folk-art scene, for instance.

Every port you'll visit takes pride in the telling of their history. From Civil War forts to stately homes-turned-museum to murals and artworks conveying the story of the town, you'll be beset with names, dates, troop movements, founding fathers, heroes, villains and everything in between.

A cruise in this region is fabulous for foodies (and spirit lovers). Shore excursions and on-your-own port explorations may take you to see tobacco fields or production facilities, to moonshine or whiskey distilleries, or to breweries. Tobacco turns a lovely shade of golden brown and many folks find the aroma of drying or freshly shredded leaves is more appealing than a fine cigar; moonshine can be surprisingly complex; and even bad whiskey has a redeeming quality or two. And since beer has grown in popularity, brewers are infusing more creativity into each batch, so in Nashville, Clarksville and Paducah, breweries offer up interesting twists on a few simple ingredients.

Best Time to Go on a Cumberland River Cruise

The weather in this part of the country can be fickle, but before we get into layers and raincoats, let's cover the obvious one: Before you depart, check the weather forecasts. Once you've reviewed a forecast or two, prepare for some surprise weather. In spring and summer, thunderstorms can pop up with little advance notice. Fall and early spring can bring surprisingly cold or surprisingly warm days. In winter, the temperature is fairly consistent, but you can get days that are downright frigid. Cruises running round trip from Nashville stay almost entirely on the Cumberland River, but they do touch the Ohio River at Paducah, Kentucky, the turnaround point. Stops along this sailing typically include Clarksville and Dover, Tennessee; and Paducah, Kentucky

Nashville to the Mississippi River

Itineraries departing from Nashville heading to the Mississippi River typically terminate at one of two ports: St. Louis, Missouri, or Memphis, Tennessee. Along these routes, ports you'll visit include Ashport Landing, Tennessee; New Madrid and Cape Girardeau, Missouri; Chester, Illinois; Paducah, Kentucky; and Dover and Clarksville, Tennessee. These cruises are typically offered as departing from Memphis or St. Louis and terminating in Nashville.

American Queen Steamboat Company runs two cruises a year between Nashville and Chattanooga along the Cumberland and Tennessee Rivers. These sailings take place the week of and the week after Thanksgiving, and along the way calls on ports like Dover and Savannah, Tennessee; Florence and Decatur, Alabama; and Paducah, Kentucky.

Nashville: The Grand Ole Opry, Ryman Auditorium, the Country Music Hall of Fame, the Johnny Cash Museum and famed honky-tonks like Tootsie's, Nudie's and Robert's Western World can only mean one thing: Nashville's moniker -- Music City -- is well deserved. Taking in the city's musical past and present is only one part of a trip here; the other part is the exponentially expanding dining scene, which spans culinary genres from Southern favorites like biscuits and barbecue to Nashville-to-the-core dishes like hot chicken to bold international restaurants to adventurous chefs redefining Southern cuisine.

Paducah: From the beautiful, 50-piece mural, depicting the history of Paducah from settlement to today, to the National Quilt Museum to the concentration of art studios and galleries, this tiny town near the confluence of the Ohio and Tennessee Rivers surprises visitors with its focus on art and the variety of mediums expertly represented across town.

Clarksville: Clarksville is proud to show off their creativity and their history, and a visit to the Customs House Museum and Cultural Center will introduce you to a good dose of both as exhibits cover the town's past, notable residents and area artists. Downtown, boutiques and galleries sell contemporary artworks, chic clothing, home goods and antiques.

Dover: Civil War sites dominate the landscape in Dover, where you can stand on the walls of Fort Donelson and imagine ironclads steaming down river as the cannon around you roared. A National Cemetery shows the aftermath of this, and other, conflicts, and the Surrender House museum tells the story of General Buckner's surrender and the end of the conflict in the region.

Pack for Any Weather

While thunderstorms are beautiful to watch roll in, they're much better from a distance than up close and personal, so pack your choice of raingear – raincoat, umbrella, galoshes – just in case. In the shoulder seasons, bring a shirt or two that are lighter than you expect to need and a jacket or sweater that you can layer on to keep you warm., You won't regret packing layers as they allow you to regulate your own temperature, whether you're out in town on an excursion, on deck watching the river go by or in the dining room ready to tuck into your dessert course.

Brush Up on Your History

After a couple of ports, it can start to run together but if you brush up on your history -- particularly Civil War history -- and familiarize yourself with this small slice of Tennessee and Kentucky history, you'll find those forts and facts and stories well-meaning docents tell make a lot more sense.

Getting a little refresher course on Civil War history will do little to prepare you for the avalanche of townie tales some smaller museums recite. When you find yourself in a grand home now chocked full of photos, maps and displays, take your time and ask plenty of questions of docents and guides. In other words, be a polite and thoughtful guest as these stories shaped these towns and many of them will amaze you.

The region around the Cumberland River offers much more than you'd expect to find in the way of food and drink, so open your senses and come hungry. Cities like Nashville offer up their own endemic specialties like Nashville hot chicken (perfectly fried chicken coated in a mild, hot or emergency level spicy batter and a cavalcade of barbecue flavors and styles ranging from whole hog barbecue in vinegary, sweet and spicy sauces or Texas-inspired cuts and sauces. In towns like Paducah you'll find a related, but noticeably different, type of barbecue if you're in for a little compare and contrast. Don't forget, this a region of vices, with a history in moonshine, whiskey and tobacco, so you'll have the chance to sample a bit of each.

Be Ready to Relax

River cruising, whether on American or European rivers, delivers a pace that begs for relaxation, so slow down and takes it easy. When the weather is favorable, sit on the deck, visit the bow or stern, or hang out on your veranda and watch the river go by. Get to know the bartenders and your shipboard entertainment crew and the Cruise Director. Make a friend or two among your fellow passengers, but remember, it's a vacation, so don't be surprised if you look at your watch and find that it's nap-thirty a time or two during your trip.

Related: The 5 Most Underrated Cruise Experiences

Make the Trip Yours

This is your getaway; so bring a few things to help you relax. If you're a birder, bring your binoculars and bird guide and watch the trees, shores and sky for herons, egrets, bald eagles, too many types of duck to count and half-a-hundred other birds. Or bring that new set of crossword or sudoku puzzles you've been saving. Or your lucky deck of cards. Bring your telephoto lens and tripod so you can snap a memorable shot or two. Bring along the thing that help you get into your relaxation zone, but you'll earn bonus points among your fellow passengers if you bring something that's a little more social than your favorite spy novel.

There's one thing you should bring on every trip: your curiosity. Cruising the Cumberland River is no different. Daily talks by your cruise director, guest speaker, guide or, on some lines, your riverlorian are more fun when the audience -- that's you -- is engaged. Curious how locks work or why they are located where they are? Ask. Want to know about how Lake Barkley and Kentucky Lake were formed? A few of your fellow passengers have the same question. Wonder why the river wasn't the site of more Civil War battles? Someone knows the answer, so ask the question you're curious about, engage with the folks onboard who are there to help you enjoy your time on the boat and learn a little something new.

When in Doubt, Ask

If you want to make the most of a free night in port but don't know what to do, you can hop on your phone or tablet and search for suggestions, or you can ask some of the folks onboard who know: the crew. The purser, she's spent time ashore and has favorite places to go. Same goes for the bartender you chat up every afternoon, and the drummer, the cruise director, housekeepers and everyone else onboard. Most of them have sailed your route a time or two (or 10) and can direct you to some off the beaten path places to eat, drink or pick up the right souvenir.