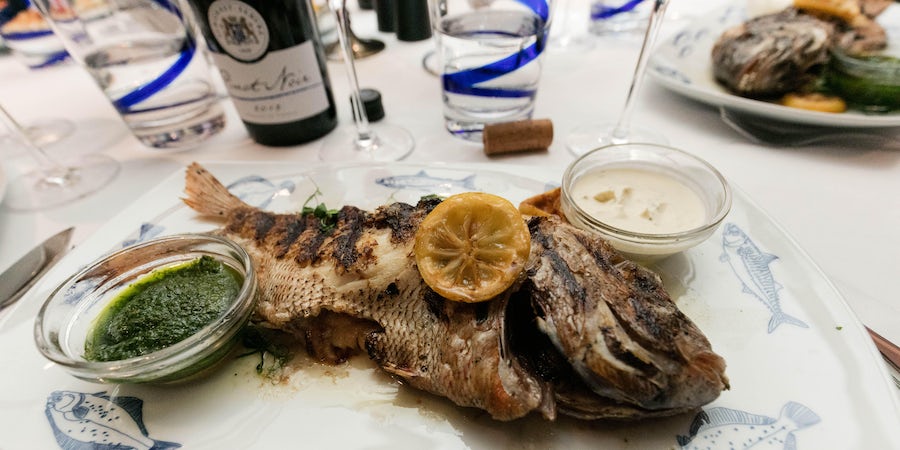 Rudi's Sel de Mer is a French-Mediterranean seafood brasserie designed by Holland America's Master Chef and culinary consultant, Rudi Sodamin. It's a separate restaurant on Holland America's newest ships, and is run as a "pop-up" on select nights on some other ships in the Pinnacle Grill.

Having Sel de Mer as a pop-up accomplishes a few things for Holland America. One, it gives the effervescent Sodamin, an Austrian chef who has been working in cruise cuisine since he was 23 and won numerous culinary awards, more exposure to the passengers and a place to shine. Two, it highlights upscale seafood dishes that you can't find elsewhere on the ship.

Sel de Mer is a standalone restaurant only on Koningsdam -- it will also be on Nieuw Statendam when it comes out in late 2018 -- where a blackboard is posted outside with the catch of the day chalked on it. Inside, one wall is made up of a single impressionist painting and ceramics line the walls. A trolley in the center of the room showcases the catch of the day and menus come as you'd expect in France: a single sheet listing the appetizers, entrees and the specials; while on the other side of the page you have a wine list featuring French wines.

On the ships where Sel de Mer is a pop-up, it's held in the Pinnacle Grill.

Fun fact: Besides being a chef, Sodamin has branched into creative culinary photography, designing ingredients like vegetables, fruit and seafood into artistic "Food Faces." The Food Faces artwork is on the plates that are used in Sel de Mer, created by Bernardaud, the French manufacturer of Limoges porcelain. It's a fun touch that lightens up the atmosphere in the usually sedate Pinnacle Grill. There's also a Food Faces coffee-table book that's sold onboard.

Since Sel de Mer is only held once on cruises under 10 days, you'll have to ask guest services what day it's going to be, and make reservations.

The Sel de Mer menu is fairly extensive, although there are limited choices for vegetarians. While it's heavy on fish and shellfish, other meats, including beef and lamb, are also available.

Appetizer choices include steak tartare; Rudi's seafood tower (with lump crab, North Sea shrimp and octopus); escargot bourguignonne, foie gras torchon and bouillabaisse Marseilles. Entree options included broiled Maine lobster, whole Dover sole meuniere, salt-crusted branzino, steak frites, duck cassoulet and a goat cheese souffle. A baguette with herbed butter and an array of tapenades is served before the meal, as is a scallop amuse-bouche. Side dishes such as cauliflower puree, truffle mashed potatoes and green beans can be shared. (It's all a lot of food.)

Desserts are ordered at the same time you make your meal choices; if you pick Rudi's souffle, it will take extra time to prepare. Other options include profiteroles, crepes Suzette, apple tarte tatin and a French cheese plate. Besides your dessert, you'll also get chocolate-dipped strawberries and truffles, arranged on a clever presentation "tree."

Sel de Mer also has a special cocktail and drinks menu (although you can still order off the Pinnacle Grill wine list if you'd prefer). French wines by the glass are featured, as is Rudi's "featured cocktail," a Vesper martini made with gin, vodka and Lillet Blanc. Liqueurs and cognacs are also on the drink menu.

Please note that this menu is a sample; actual menus vary by ship and sailing.

On Koningdam and Nieuw Statendam, Sel de Mer is priced a la carte, with appetizers starting at $6 and entrees ranging from $16 to $32.

The Sel de Mer pop-up night costs $49 (plus a 15 percent gratuity) and is offered once on a seven-night cruise and twice on itineraries longer than 20 nights. The price includes an amuse-bouche, appetizers, entrees with unlimited sides, a dessert and a selection of chocolate-covered strawberries and candies. A plate of truffles is delivered to your cabin that night. Reservations are essential.

Sel de Mer pop-up night in the Pinnacle Grill is currently available on the following ships: