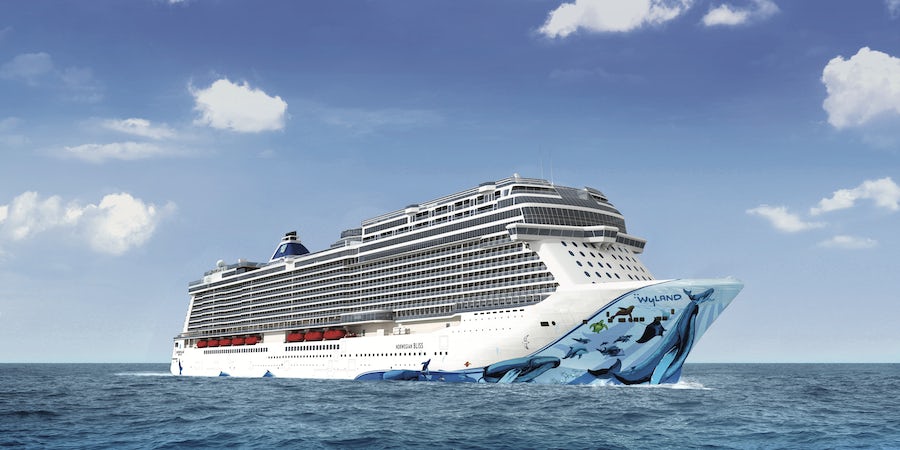 Norwegian Bliss
Dori Saltzman
Contributor
Cruisers heading out to sea on Norwegian Cruise Line's newest ship, Norwegian Bliss, will find an impressive array of top deck activities, restaurants and evening fun. In fact, there might be too much for any one cruiser to do in just a week, so before you risk missing something you'll regret, Cruise Critic has picked out the most exciting things to see and do so you'll know before you go.
On This Page

Channel your inner racecar driver and put pedal to the metal on this two-level, nearly 1,000 foot-long Go-Kart racetrack. Whether you're a novice and want to stay at a mild 10 miles per hour or have logged lots of time on a Go-Kart and are ready to max out your electric car at 30 miles an hour, the Go-Kart adventure on Norwegian Bliss will be a blast for everyone who gives it a try. Available in four speeds and safe to operate in damp conditions (so even Alaska cruisers can give it a whirl), the electric cars run silently so as not to disturb other passengers. But speakers near the driver's headrest pipe in all the racetrack sounds you'd expect to hear.

2. Solo Cabins With a View

Brand new to Norwegian Cruise Line is a category of 82 inside cabins designed and priced for solo travelers that feature virtual ocean views via a medium-sized faux window. Scenery reflects what's outside the ship, so you get all the benefits of an ocean-view cabin without the expense of one. And, as on other Norwegian ships with cabins built for one, the virtual view solo rooms are part of a dedicated Studio complex created just for solo cruisers; it's keycard accessible and includes access to a private lounge.

Another adrenaline-pumping top deck activity on Norwegian Bliss is the multi-waterslide Aqua Park, which includes the high-speed Ocean Loops freefall waterslide. The slide drops riders into two loops: both extend well over the side of the ship and have see-through sections so you can actually see how far from the ship you are. Across the way is the tandem Aqua Racer, which allows riders to "race" side by side on inner tubes for more than 360 feet.

If the Go-Kart and waterslides weren't enough adrenaline-inducing fun, Norwegian Bliss also has an outdoor laser tag course to get your blood pumping. In this space-themed arena, human colonists have lost contact with Planet Earth and it's up to you to find them while searching their abandoned spaceship. But beware, others are on the course doing the same thing and it's their mission to stop you (just as it's your missions to stop them). The course is set up so that friends can play against each other in a private session or as a group versus another group during an open session.

Extra napkins are a must at this authentic Texas barbecue joint where brisket, ribs, chicken and sausages are on the menu and pop-country music is played each night. Called "Q" for short, this new-to-Norwegian eatery smokes various meats over hickory, oak and pecan woods for a divinely aromatic atmosphere. Combine the meats with starters and sides that include such downhome delights as natural air-cured ham; fresh cheddar and breadcrumb-crusted mac 'n' cheese; and baked sweet potatoes smothered in pecan honey butter and cinnamon. You'll need to get up and start line dancing to burn off all the calories you just consumed!

You'll have an "Oh, what a night" experience seeing the Tony Award-winning Broadway hit "Jersey Boys" on Norwegian Bliss. This full-scale production, which tells the "true" story of Frankie Valli and The Four Seasons, features hits like "Big Girls Don't Cry," "Walk Like a Man," "Sherry," and "Can't Take My Eyes Off You." If the Beatles are more your speed, then The Cavern Club is the place for you. Inspired by the real Cavern Club in Liverpool where The Beatles played some of their earliest gigs, this onboard version of the club features a Beatles cover band playing all your favorite hits from the Fab Four.

Related: 9 Free Things to Do on Norwegian Encore

Another first for Norwegian Cruise Line is the 20,000-square-foot Observation Lounge, which spans the entire forward section of Norwegian Bliss giving more people a chance to take in the 180-degree views the lounge provides. This is especially appreciated in Alaska, where panoramic views are a must, but not everyone wants to brave the cold. With more than 3,500 square feet of floor-to-ceiling windows, there's plenty of room for everyone to watch the wonders of Alaska or the Caribbean float by. And, in between all the sightseeing, you can take advantage of the free nibbles available morning, noon and night.

Fans of Norwegian's The Haven, a ship-within-a-ship enclave for cruisers who want the full suite experience, will love The Haven on Norwegian Bliss. The largest in the Norwegian fleet, Bliss' Haven is three stories and features 80 suites, a private restaurant with indoor and outdoor dining space, a lounge with a dedicated mixologist, the two-story Horizon Observation Lounge, plus a courtyard with retractable roof, a pool, four hot tubs, a sauna and spa treatment room.