You may also like
Dismiss
Harmony of the Seas vs. Allure of the Seas
Anthem of the Seas Puzzle Break
Slideboarding on MSC Cruises
Can I Play Bridge on a Cruise?
Embarkation in Barcelona: Cruise Terminal Parking, Address and Amenities
Royal Caribbean Water Parks: H2O Zone vs. Splashaway Bay
Cruise Ship Laser Tag: Where to Find It, How to Play It
Upper Mekong River Cruise Tips
How to Survive a Cruise With Kids on an Adult-Focused Ship
Sky Zone on Carnival Cruise Line 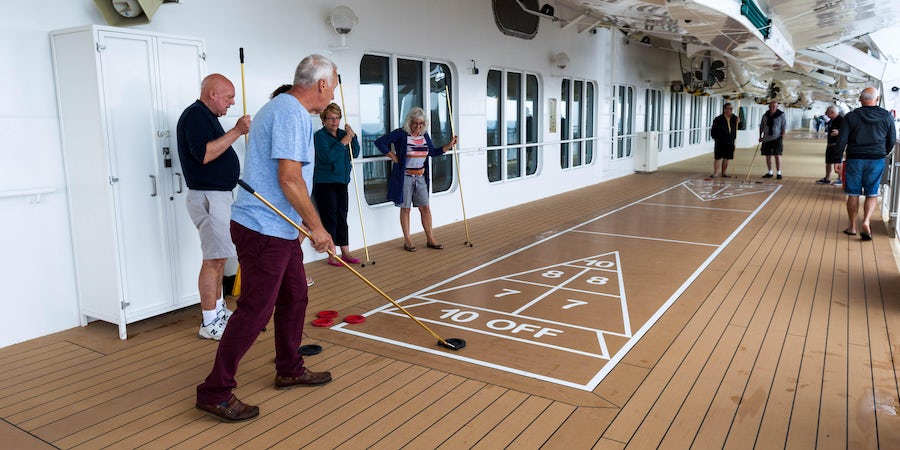 What Is Shuffleboard on a Cruise?

Shuffleboard is a game commonly found on cruise ships where players use long sticks with special curved tips to slide disks across a court painted onto the deck. It is a fun way to spend time outdoors during a cruise, particularly on sea days. Shuffleboard courts are usually on the promenade deck.

Though the game has apparently been around for more than 500 years, unless you cruise frequently or live in South Florida where it is popular among retirees, you might not know how to play shuffleboard. The game court consists of two triangles pointing toward the center of the court, with a gap of 12 feet between their tips. Play may be between two individuals or between two doubles teams.

Scoring areas are marked on each triangle, with zones valued at 7, 8, 10 and 10-off (where 10 points are deducted). Only disks squarely within the boundaries of a scoring area without touching the lines count as a score. Disks that fall short of the line marking the opposing triangle's zone are removed from play for that round so that they cannot be pushed onto the scoring area.

Each team or player will have four disks to play per round. Play alternates between the teams. Scoring is not done until the end of the round, allowing opponents an opportunity to knock opposing disks off high-scoring positions.

Once the score for the round is tallied, the players swap ends and repeat the process, until the agreed-upon end point or number of rounds has been reached. The player who plays last in each round has a distinct advantage, so who plays first should also be reversed with each swap of the ends of the court.

Official shuffleboard rules are often posted near the courts.