You may also like
Dismiss
10 Great Tips to Help You Relax on Your Cruise
What is OceanMedallion on a Cruise?
What Are Cruise Ship Sea Trials?
Q&A: What Does the Vacation of the Future Look Like?
7 Tips for Getting the Most Out of Your OceanMedallion Experience
What Lines Are Doing With Next-Gen Cruise Technology
Princess Cruise Veterans Adopt OceanMedallion to Enjoy a More Personalized Vacation
Cruise Vision 2020: The Future of Cruising in Australia and New Zealand
Best Cruise Ships in the Galapagos
Why Germ-Zapping Robots and AI Technology Could Be the Future For Cruise Ships 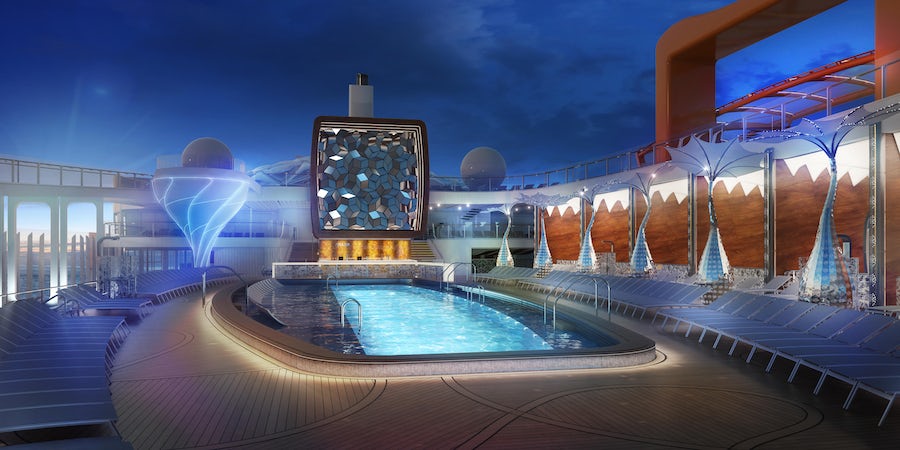 No doubt: 2018 promises to be one of the biggest years in cruising. With so many brand-spanking-new cruise ships launching, we're downright giddy with all the new hardware hitting the waves -- not to mention all the cruise innovation we expect to see. Here are 12 cruise trends we predict are coming in 2018.

The cruise industry has seen a proliferation of technological gizmos over the past few years, but 2018 and beyond will see technology augment the cruise experience in an entirely new way, from virtual-reality dining experiences and shore excursion samplers to interactive avatars that follow cruisers around the ship and wearable technology that enables passengers to open doors with the wave of a hand or order food and drinks without ever leaving the comfort of their poolside lounger. Plus, Wi-Fi will continue to get faster, reaching land-like speeds on more ships.

While cruises can be a great way to get a taste of a place, several cruise lines are choosing to immerse passengers in a culture by offering cruises that concentrate solely on one country. Azamara offers journeys that make multiple stops within Japan, Costa Rica, Australia or Norway's North Cape, while Ponant offers New Zealand, Chile, Cuba, Croatia, Iceland or South Africa-intensive voyages. Even mainstream cruise lines are jumping on the trend, with Princess Cruises concentrating on Japan and Australia.

3. Big Continues to be "Better"

As cruise ships get bigger, they will continue to become smarter and unveil more jaw-dropping offerings. This spring, Royal Caribbean, Carnival Cruise Line and Norwegian Cruise Line will launch their biggest ships to date -- each of which will feature not only firsts for the line, but also the industry, while building upon previous ships' designs. For example, Royal Caribbean's Symphony of the Seas will introduce a reimagined Boardwalk (an Oasis-class staple) with a new sports bar and arcade; Carnival Horizon will expand on sister ship Carnival Vista's dining program, with a new teppanyaki restaurant and combo barbeque/brewery venue; and Norwegian Bliss will take the line's Breakaway Plus Class to the next level with features like an electric Go-Kart race track, laser tag and a 20,000-square-foot Observation Lounge with 180-degree views. Symphony of the Seas also will debut a new mobile check-in service that uses facial recognition technology to speed up the process in the terminal.

When you build the world's largest and most revolutionary cruise ships, it follows that the terminal facilities should match. Carnival Corporation aims to improve embarkation with forthcoming Ocean Medallion technology; multimillion-dollar upgrades to Terminal 2 in Fort Lauderdale's Port Everglades were completed in November 2017. In early December, MSC Cruises and PortMiami celebrated the completion of Terminal F, the new terminal where MSC Seaside will dock when it arrives in Miami. Royal Caribbean's Symphony of the Seas will be greeted by Terminal A in PortMiami, designed to host Royal's Oasis-class vessels.  Celebrity Edge will sail from its first branded cruise terminal, Terminal 25 in Fort Lauderdale, when it launches in December 2018. Upgrades to other homeports across the U.S., like a $1.7 million expansion of Port Tampa Bay, continue to show that cruise ships are a welcome boon to local economies.

It used to be cruises were all about eating food. We predict the emphasis will increasingly turn toward learning about and appreciating food. Look for lines like Regent Seven Seas and Oceania Cruises to expand their culinary-themed tours, Windstar Cruises to leverage its James Beard partnership, new cruise ships to debut with test kitchens and cooking demo centers, and mainstream lines to hop on the luxury bandwagon and start offering market tours.

6. Passengers Cruise to be Healthy

Wellness programming is not only a way to combat the misconception that cruises are bastions of overeating and debauchery. It's a way to attract new cruisers and keep returning passengers excited about older ships or ho-hum itineraries. From luxury to river and mainstream, expect to see more health-focused activities in the coming years. In 2017, Regent and Oceania began wellness tours in select ports, Seabourn Cruise Line partnered with Dr. Andrew Weil to offer healthy lifestyle onboard programming and MSC rolled out its Wellness Experience package in conjunction with Technogym. Look for these lines to expand their activities, and other lines to copycat. River line AmaWaterways is adding wellness cruises to more ships in 2018, with activities like increased onboard exercise classes, health-food menus and healthy living discussion groups and active shore tours. Stay tuned for other river cruise lines to hoist the healthy flag as well.

With nearly 20 expedition ships entering the cruise market between January 1, 2018, and December 31, 2020, expedition cruising is entering a golden age unlike any we've seen. Plus, traditionally non-expedition brands including Windstar and Seabourn are adding expeditionary facets to their itineraries. Expedition ships are being added all over the world. What's more, the comfort level of these cruises is increasing; you can indulge in luxury experiences on brands such as Crystal Cruises, Scenic and Ponant. Look for high-end service on these cruises, as well as high-tech toys that include underwater lounges, helicopters and submarines.

Related: How Small Is a Small Ship -- and Which Luxury Cruise Ship Size Is Right for You?

Cruise lines have been innovative when it comes to public spaces and dining on their ships. But changes to cabins have been less noticeable. That ends in 2018 with the introduction of Celebrity Edge, which took inspiration from river cruise ships and resorts for its cabins. Edge will introduce infinite balconies, where the space closest to the outside can transform from a fresh air veranda into a closed-off sun room with the click of a button. This concept is familiar to river cruisers, but it's brand-new to ocean vessels, and Celebrity made some major architectural changes to make it work. (Now that Celebrity has figured out how to do this, you can be sure other cruise lines will follow suit.) Additionally, the line looked to trendy boutique hotels for lobby, lounge and restaurant ideas. Virgin Voyages is doing the same, and though details are scant, you can be sure each Virgin ship will look more like a chic hotel than a cruise vessel.

SeaDream Yacht Club used to be in a class all its own with 110-passenger ships that emphasized outdoor space and incredible service in an attempt to mimic the private yacht experience on a small cruise ship. But with luxury cruise ships growing larger, privileged passengers lamented the loss of intimacy, and the cruise lines listened. Crystal came out with 62-passenger yacht Crystal Esprit in 2015, with plans for a more adventuresome yacht in 2019. The 228-passenger Scenic Eclipse will debut in 2018, and Ritz-Carlton's foray into cruising will see a new 298-passenger yacht launch in 2019. Though slightly larger, these ships will focus on that sleek yacht look and personalized luxury feel. We predict many luxury travelers will jump ship from the 600-passenger ships back to these tiny beauties.

River cruise excursions used to be limited to walking and coach tours, but no longer. Now lines are getting creative with excursions, finding ways for passengers to stay active with bike tours, hikes, kayaking and canoeing. Bikes and fitness rooms are becoming standard, with some lines even adding onboard wellness and yoga instructors.

11. Millennials Drive Experience Onboard and Ashore

Craft beer, "silent discos," farm-to-table dining and rooftop bar-style sun decks … cruise lines are innovating ships to lure the growing millennial market. Uniworld Boutique River Cruise Collection has gone as far as to develop a river cruise brand solely for 21- to 45-year-olds, called U by Uniworld. These river cruises include complimentary yoga classes and Wi-Fi, and unique experiences in port such as kayaking France's Seine River and cocktail-making in Amsterdam. Celebrity Cruises will introduce a Library of Plants bar feature on its new ship, Celebrity Edge, from which bartenders will be able to handpick ingredients for artisanal drinks. Meanwhile, Virgin Voyages, helmed by mogul Richard Branson, has come right out and said millennials are the target audience for its first ship, launching 2020; the ship will be for adults only and boast a trendy design akin to the company's airline.

Cruise lines continue to show dedication to private ports and islands -- Carnival Corporation opened Amber Cove in the Dominican Republic just over two years ago, and Norwegian Cruise Line's Harvest Caye, in Belize, celebrated its first anniversary in November 2017. Holland America Line is celebrating the 20th anniversary of Half Moon Cay, its private island in the Bahamas, with special events throughout 2018, including a brand-new water park for kids. Royal Caribbean's private island in the Bahamas, CocoCay, will also see improvements throughout 2018 and 2019, including the development of a pier to accommodate Oasis-class ships. MSC Cruises broke ground on its Ocean Cay Marine Reserve in May 2017. When complete (expected in late 2018), the Bahamas destination is slated to become the largest cruise line private island in the Caribbean.