You may also like
Dismiss
Is a Small Ship Cruise in the Caribbean Right for You?
Top Lines for a Casual Luxury Cruise
Costa Rica and Panama Expedition Cruise Tips
What Is a Cruise Ship Bridge?
9 Reasons Why a Fiji Cruise Should Be Your Next Pacific Island Cruise
5 Things You Didn’t Know About Windstar
Best Shore Excursions in 30 South Pacific Ports
8 Exhilarating Shore Excursions
10 Things You Should Never Do on a Cruise Line Private Island
M Crew Kids Club on Marella Cruises 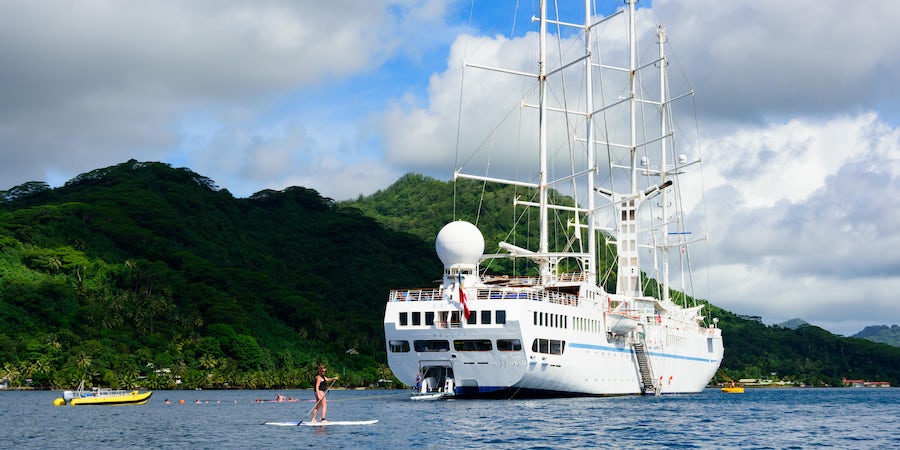 While big ships impress with onboard surf simulators and corkscrew water slides, smaller vessels like the six ships in Windstar Cruises' fleet are upping their game in another direction: putting you directly in the water instead of several stories above it. Windstar's water sports platforms give passengers complimentary access to water toys, water skiing and more directly from the back of the ship.

At the aft of each Windstar ship, a retractable platform opens down onto the water like a trap door. It creates a swim platform similar to those you cannon-balled off years ago. During days the ship is at anchor -- rather than docked -- you can swim or use any of the water toys at no charge. On the Windstar fleet you can try stand-up paddleboards, kayaks, sailboats, windsurfers, snorkeling gear, water trampolines and inflatable water structures (think summer camp). No matter which toy you borrow, the water sports crew expects you to wear a lifejacket and stay within eyeshot of the platform. They do come after you when you paddle too far. If you want to try water skiing, wakeboarding or tubing, the crew has a small, motorized boat ready to take you out from the platform.

On the first full day of our Tahitian cruise on Windstar's Wind Spirit sailing yacht, gray skies sprinkled a light, warm rain across Cook's Bay, where the ship anchored in Moorea. My sister and I didn't have any shore excursions booked, so we decided to give the water sports platform a try. Once we got wet, it wouldn't matter how hard it rained, we figured.

Related: Tips for Picking a Cruise to Tahiti

At 9:30 a.m. that day we headed to the end of the stateroom hallway on Deck 2 and through the door marked "Marina." The water sports crew greeted us with big smiles and fitted us for the snorkeling equipment we would get to keep for the week.

We were the only ones there that morning. The platform was busy most afternoons, but there were never lines. My sister and I stashed our snorkeling gear with our swimsuit cover-ups then asked about water skiing and wakeboarding. While one of the water sports crew handed each of us a neoprene lifejacket, the other fired up the engine of a yellow, inflatable catamaran and loaded up the towrope and gear.

I eyed the big "90" on the engine and wondered if 90 horsepower would be enough to pull me out of the water. I was no spring chicken. And it had been awhile since I had been back to the family lake cottage where my sister and I learned to ski when we were kids.

"It's enough … it's no problem," said the tanned, muscular water sports crew guys in their adorable accents. My sister and I exchanged glances, smiled and climbed into the boat with them.

Once we were a safe distance from the ship, the moment of truth came. I jumped into the cobalt blue bay, slipped my feet into the ski boots, and gripped the towrope handle with everything I had.

"Ready?" came the call from the boat. "Ready!" I drew in a breath and held it. The engine revved. The rope tightened. And the next thing I knew I was up on top of the water, skimming across the perfectly calm bay, smooth as glass. I let out a few woo-hoos and hardly even noticed the rain.

It was my first time skiing on the ocean and with a backdrop I would never forget. Lush mountains edged the bay and a few modest homes dotted the shoreline. In the distance, waves broke on the reef. The crew said whales were swimming in this secluded bay a month ago.

"You've still got it!" my sister cheered when I climbed back into the boat. I was able to say the same thing to her after she circled both the bay and our ship on a wakeboard.

Related: 6 Cruise Memories That Will Warm Your Heart

Soaking wet and invigorated, we took out the stand-up paddleboards next. The SUPs were the most popular of the water toys throughout our cruise; the boards were all of high quality and relatively new. I wobbled a fair bit and wiped out but started to get the hang of it after a while. We managed to entertain the scattered top-deck onlookers and stayed out long enough to justify an umbrella drink in the hot tub afterward.

Definitely! The views of the ship and surrounding landscape from the water (whether the islands of Tahiti or Italy's Portofino) are spectacular. If you're new to a water sport, the crew offers guidance to help get you started. Passengers have unlimited free access to the water sports platform when it is open, weather permitting. Mornings are usually the quietest time to try the platform; afternoons can get busy once passengers return from shore excursions.

The water sports platform is open only on days when the ship is at anchor, not docked. If there is a private island day in the itinerary, then the water sports are usually run from the shore rather than onboard on the platform. Some experience is necessary for borrowing the sailboats. Passengers who want to learn to water ski or wakeboard are given a few tries, depending on how many other people are waiting. Dive and snorkel boats and other tour operators occasionally pick up passengers on the platform to depart on excursions.