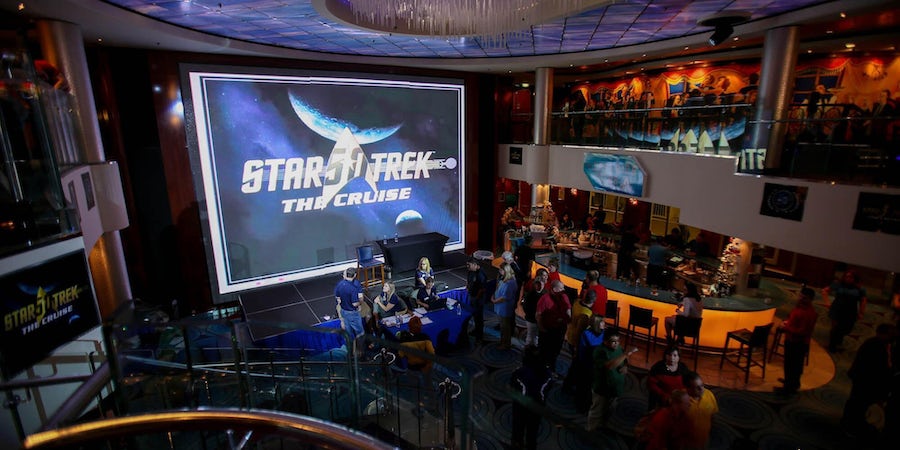 Fan get the chance to meet and mingle with their favorite stars on the Star Trek Cruise (Photo: Star Trek: The Cruise)

Fan get the chance to meet and mingle with their favorite stars on the Star Trek Cruise (Photo: Star Trek: The Cruise)
Gina Laguardia
Contributor

If you're about to embark on a theme cruise, it's most likely because you're pretty passionate about something or wish to be whisked away for a few days of fun and fandom. You may be a New Kids on the Block-head who's still "Hangin' Tough"; a fan of "The Walking Dead" just dying to hang with Norman Reedus; or a rock 'n wrestling fan who hopes to hit the lido deck with the best -- and biggest -- of 'em.

Indeed, the list of theme cruises is as endless as the types of fans they attract. There's one thing they all have in common, however: a desire for a selfie and some face time with a favorite celeb.

Here are five ways you can achieve that dream:

If you know what's happening -- and when -- you'll have a fairly good shot at face time, especially if you plan ahead, have patience and don't mind camping out. Part of the attraction of theme cruises is the camaraderie with celebs forged through special events like game shows, exclusive performances and deck parties. Events held in the ship's theater often mean assigned seating. Those in VIP-level cabins get the coveted first 10 rows; remaining seats are determined by time of booking, so don't dawdle.

You can also take fate into your own hands for events elsewhere on the ship. Lido deck campouts, for instance, are common. Extremely dedicated fans have been known to arrive with towels, snacks and a plan for restroom/lunch/dinner break switch-outs with friends at least six hours early to stake claim to the areas closest to the stage and performance platforms.

Truly, the only face time that's guaranteed on theme cruises is scheduled meet-and-greet photographs with the notable headliners, where available. This one-on-one time features at least one full minute of a hello, hug and mutual "smile-for-the-camera" -- because your brush-with-stardom isn't truly real until you post the photo on social media.

2. Get Chummy with Security

Many theme cruises have been so successful that they've become annual escapades. The Backstreet Boys and New Kids on the Block have many cruises under their belts. Some theme cruise alumni have found that befriending the security guards, many of whom become repeat cruisers themselves thanks to standing contracts on such charter ships, has helped them get closer to the action.

Related: Nude Cruises: 11 Questions We All Have

Even something as minor as being able to stand at the front edge of a roped-off area can spell the difference between a simple glance or a selfie. It can also help on those theme cruises that have non-publicized after-parties. On the NKOTB cruise, only about 250 to 300 cruisers are granted entry to Donnie Wahlberg's exclusive post-deck party soirees with a special wristband that's distributed to friends of the band, "regulars" and those who know someone. There's also the patience-factor -- you can wait in line and hope to be let in.

Be a "Cabin Crusader"

Do some digging on online fan club forums before booking to find out which deck is earmarked for talent. Book on that level, throw in a doorstopper and keep your fingers crossed. Stars need to walk through the hallways, too -- your open invitation to your celebrity crush to pop his or her head in to say hello has proven a successful tactic for many. Keep your ears open and you can also jump into the hallway with your smartphone in selfie mode when the time is right.

Related: 7 Ways to Get the Cruise Ship Photographer to Leave You Alone

Not rooming on that level? No problem. While security typically cordons off areas right outside celebrity rooms, fans have been known to score a selfie by timing their stairwell placement strategically in sync with scheduled appearances.

Some fans say the unique memorabilia they brought onboard helped them get noticed by their favorite stars. Dig out the old ticket stubs, T-shirts or action figures, and see if one of them catches the eye -- and sentimental heartstrings -- of the one who makes your heart go pitter-pat.

Related: Inside the Property Brothers Cruise: 5 Things to Know About a Fan Cruise

Another way to finagle some face time? Get fancy with deck party attire and theme costumes. The more ingenious or outlandish, the better. Just ask the three "dinosaurs" that got Donnie Wahlberg's attention -- and dance card -- on the latest NKOTB cruise.

Yes, we saved the best for last. Ask that Facebook friend with the amazing theme cruise photo and "I-can't-even-believe-it-happened" story, and she'll most likely tell you she was in the right place at the right time -- and often without makeup. ("The worse you look, the more likely you are to run into your favorite," jokes one fan.)

Indeed, a magical theme cruise adventure very rarely happens to those who plan for face time like it's their job. The best thrills lie ultimately in the bonds you strengthen with your fellow travelers, the new friendships you create and the memories you make -- and let happen -- along the way.