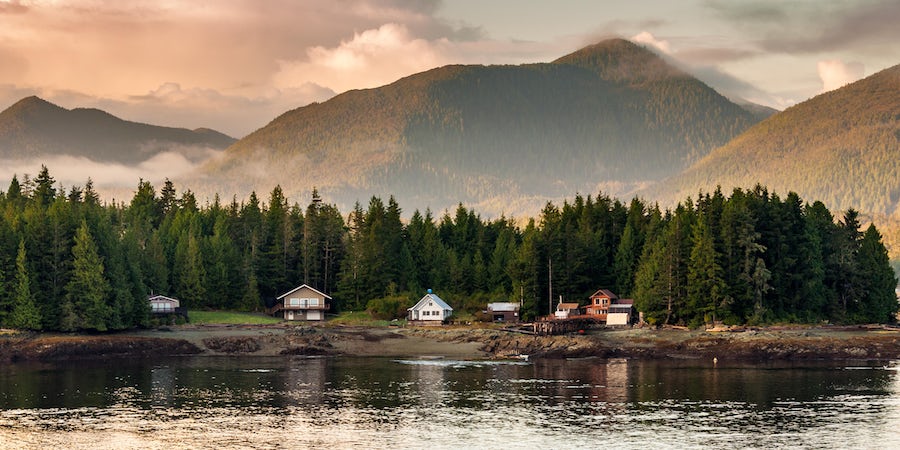 Everything's bigger in Alaska. It's twice the size of Texas, the natural beauty is immense and prices for tourist staples are supersized, as well. That's because the cost of what you eat, drink or buy in Alaskan ports reflects the cost of getting it there. Then there are the shore excursions. Tours in Alaska tend to be more expensive than you'd find in the Caribbean because tour operators have to shoulder the costs of operating in the United States (minimum wage, insurance, etc.) and many excursions traverse long distances by bus or even plane, boat or train and include a meal (salmon bake, anyone?), all of which increase the cost.

The good news? It's definitely doable to have a memorable time without busting your vacation budget. Read on for the bargain-price -- or free! -- experiences we found in the popular ports of Juneau, Ketchikan, Skagway and Victoria, British Columbia. Walking tours and hikes: Pick up a free map of the Ketchikan walking tour at one of the Visitor Information Centers at cruise ship berths 2 and 3. Numbered signs at designated stops indicate additional information is available in the brochure. Or download KETCHicons, a free app that includes a map denoting two dozen points of interest, from totem poles to historic landmarks and public art. At the Visitor Information Center, you can take advantage of the Ketchikan Volunteer & Rescue Squad's SPOT program, which loans out complimentary GPS locator beacons and hiking trail maps free of charge (though a donation of any amount is always appreciated).

Dolly's House: Dolly Arthur was the best known of several ladies of the evening (not to mention a smart businesswoman) who lived and worked on Creek Street, a row of wooden buildings perched over the water on pilings. This museum is the only house of ill repute still standing, and looks pretty much as it did when it was finally shut down in 1954. Tours are $10.

Southeast Alaska Discovery Center: At the Southeast Alaska Discovery Center, you can see how the temperate rainforests of the region, specifically the Tongass National Forest, rival their better-known tropical cousins. Visitors can stroll through both a re-created rainforest and Native fishing village, then take a guided walk of the surrounding area with a forest service ranger. Kids can earn Junior Ranger credentials. Admission is $5, and kids younger than 16 are free.

Saxman Totem Park: With 25 and counting, Saxman Totem Park boasts the largest collection of free standing totem poles in the world. You can opt to poke around the poles, each packed with symbolism, on your own, or take a guided tour. Either way, be sure to say hello to the native craftsmen in the carving shed, working on new poles with traditional tools. A free downtown shuttle or city bus will get you to the park 2 miles south of Ketchikan. Admission is $5. Alaska State Capitol Building: For a seat of government, the architecture of the Alaska State Capitol Building is a bit unusual. But we won't ruin the surprise. Free self-guided tours start in the lobby throughout the summer. The governor, lieutenant governor and state legislature work here. Don't miss the impressive display of historical photos and the Hall of Governors.

Juneau Artists Gallery: A range of artistic media, including beadwork, photography and etchings, are part of the changing displays at the cooperatively owned and operated Juneau Artists Gallery. The 25 local artists create, show off and sell, if you like, their handiwork on the first floor of the downtown Senate Building.

Last Chance Mining Museum: Listed on the National Register of Historic Places and Alaska Gold Rush Properties, the Last Chance Mining Museum has one of the world's largest air compressors and other industrial artifacts used in hard rock gold mining. You'll also see the electric locomotives and rail cars that hauled both miners and ore. There's also a re-created mining tunnel, and a 3D glass map of the different levels of mining shafts. The environment inspires many questions from visitors; luckily, the docents really know their stuff. Admission is $5 for adults, and free for kids ages 12 and younger.

Mount Roberts hike: Sure, you can take the Mount Roberts Tramway, but that will run you $35 each ($18 for kids). What savvy, reasonably fit visitors with appropriate shoes do is hike to the top. You should allow about two hours to make your way up the 1,800 feet, but it's a lush, well-traveled trail with spots to rest along the way. After burning off the previous day's buffets, take in expansive views of Juneau and Gastineau Channel and visit a live bald eagle display. In the Chilkat Theater, you can see a short free film on Tlingit history and culture, and get a free mini lesson in the Tlingit language. Gunalcheesh! (You're welcome.) Spend $10 per person in the gift shop or restaurant, and that's your tram ticket down.

Sealaska Heritage Institute: Housed in a sleek, modern building, the Sealaska Heritage Institute exhibits highly valued clan possessions and stunning works of art and craftsmanship from Tlingit, Haida and Tsimshian native peoples. Some of the large-scale installations are the largest of their type in the world. A highlight is a walk through a traditional Clan House with modern touches. Admission is $5 for adults, $4 for seniors and free for kids 7 and younger. Gold Rush Cemetery and Reid Falls: A junket out to the Gold Rush Cemetery and Reid Falls is well worth your time yet costs only $5 per person, round trip, in shuttle fare. Board the hop-on, hop-off SMART blue-and-white bus at the Second Street and Broadway stop, an easy walk from the cruise ship. You'll be let off about a half-mile from the cemetery. Follow the gravel road around and behind the railroad yards. Continue across the railroad tracks. (This walk may take longer than you expect, given the scenery all around you that begs for photos.) The cemetery is in the woods just past the parking area. Yes, this is an especially creepy cemetery, but it's thought-provoking to see how young people were when they passed on during that era. Follow the signs to a short forest trail behind the cemetery that leads to Lower Reid Falls. You'll feel like you just discovered a beautiful, secret place, even though there will probably be other sojourners coming or going.

Historic District walking tour: Stop at the National Historical Park Visitor Center at the corner of Second Street and Broadway to sign up for the free walking tour of the Historic District led by a National Park Service ranger. Watch the free film "Days of Adventure/Dream of Gold" while you wait for your tour to start.

Trail of '98 Museum: A hidden little gem, the Trail of '98 Museum displays a well-presented, surprisingly comprehensive collection of antiques and artifacts of the Gold Rush. Friendly attendants -- residents who are, naturally, the biggest fans of this incredible area -- are eager to answer visitors' questions. The striking stone building, as well as the property's manicured garden, make a nice photo opp when you're finished inside the museum. $2 admission fee.

Brothel tour: Brothels were part and parcel of life in Skagway back in the Gold Rush days, and Red Onion Saloon is operating in a building that once housed one of the most notorious ones. A Quickie Brothel Tour at the saloon begins with a "madam" leading your group up the "Stairway to Heaven" to check out the rooms where business was conducted and hear the associated tales of tragedy, mystery, murder and even romance. If you're lucky (or unlucky?), you might run into the resident ghost. After the 20-minute tour, it's hard to resist throwing back an Alaskan-brewed beer with the "Good-Time Girls" (or Gents), the bartenders who channel the servers of the past. The tour is $10. Ogden Point Lighthouse: Walk along the 2,500-foot breakwater at Ogden Point, which is where the cruise ships all dock, toward the Ogden Point Lighthouse to spot harbor seals. Even if marine mammals are elusive, you can still watch the ferries going in and out of the city, and seaplanes taking off and landing. It's the perfect place for an Instagram moment, especially at sunset.

Related: 10 Reasons to Stay in Seattle Before Your Alaska Cruise

Fisherman's Wharf: A 10-minute walk from Ogden's Point, Fisherman's Wharf is home to an array of colorful float homes connected by boardwalks and a variety of well-priced food vendors. You'll also find a cute little park with a fun playground for the kids. Don't be surprised if a "pirate" duel breaks out, to the delight of young visitors. (Don't worry -- they're only actors!) Otters also make an appearance from time to time.

Inner Harbour: You can reach the hub of downtown via a shuttle from the port for about $10 round trip. Or take a pleasant 20-minute walk northeast along the waterfront on Dallas Road, then onto Government Street to reach the Inner Harbour. Once there, you can walk around the regal Fairmont Empress Hotel (essentially The Plaza of Canada, afternoon tea and all) or head just south to romp around under a wide canopy of Garry oak trees in Beacon Hill Park, where there is also a petting zoo and the world's tallest totem pole, at higher than 127 feet. Chinatown is worth a look, especially Fan Tan Alley, the narrowest street in Canada. Back in the early 1900s, opium was sold there. Now wares are more on the order of matcha tea and organic body butter. The centerpiece of Inner Harbour, though, is the British Columbia Parliament Buildings. Free tours are given daily, during which you'll hear about the design and construction features of the circa-1898 structure and an explanation of the parliamentary system of government -- which apparently wasn't always a genteel process. (The government and opposing benches had to be built 2.5 sword-lengths apart.)