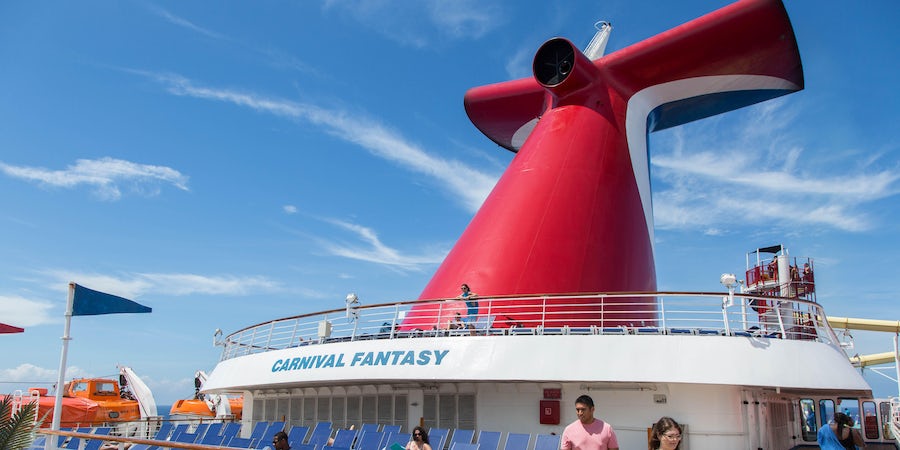 The Sun Decks on Carnival Fantasy

Which vessels are in the Carnival Cruise Line fleet?

Founded in 1972 by business mogul Ted Arison, Carnival Cruise Line began as a private company and is now the largest brand owned by Carnival Corporation & plc (of which Arison's son, Micky Arison, is the chairman). The line's most distinct feature is its red, white and blue funnel shaped like a whale's tail.

Carnival Cruise Line pioneered the concept of shorter, budget-friendly cruises. Its fleet consists of "Fun Ships" that feature a wide array of entertainment and dining venues -- most of which are included in the already-affordable cruise fares.

TSS Mardi Gras, the line's first ship, was purchased from Canadian Pacific Steamships Ltd., and sailed for the line from 1972 to 1993. Carnival purchased and retrofitted two additional ships after its debut -- Carnivale and Festivale (both of which left the fleet in the '90s) -- but it wasn't until 1982 that the line introduced its first new-build -- Tropicale, which sailed for the company until 2001 when it was transferred to Costa.

From that point on, the line would continue to custom-build ships, gradually increasing the size. Among these first new-builds were Holiday (1985), Jubilee (1986) and Celebration (1987). All four of these first ships left the Carnival fleet between 2001 and 2009.

Carnival Fantasy has the longest tenure with the line; it launched in 1990 -- marking the beginning of the Fantasy Class. It also became the first new cruise ship to ever offer three- and four-night Bahamas cruises from Miami.

Carnival made history later in 1996, when Carnival Destiny launched as the largest passenger cruise ship in the world (at that time) and the first to exceed 100,000 tons. The ship also marked a new Destiny class of ships, which would continue to be slightly larger than those in the Fantasy Class. (Carnival Destiny was retrofitted and renamed Carnival Sunshine in 2013, and placed in its own Sunshine Class. The 3,006-passenger ship remains one of the most popular ships in Carnival's fleet.)

Related: Where You Can Cruise to Onboard Carnival's Newest Cruise Ship, Carnival Panorama

After dipping its toes into 100,000-plus-ton ships, Carnival returned to building slightly smaller ships -- with a new Spirit Class spearheaded by the 88,500-ton Carnival Spirit. Carnival Spirit became the first new cruise ship ever positioned in Alaska and Hawaii. Following the class' namesake ship were Carnival Pride and Carnival Legend, both launched in 2002.

The year 2002 remained a busy one for Carnival; after the second and third Spirit-class ships launched, it debuted its next class -- Conquest -- which marked the return of big ships for the line. The 110,000-ton Carnival Conquest was followed by Carnival Glory in 2003. In 2004, the fourth Spirit-class ship, Carnival Miracle, entered service. One year later, Carnival unveiled its third and fourth Conquest-class ships, Carnival Liberty and Carnival Valor.

Two years passed before Carnival's fifth Conquest-class ship, Carnival Freedom, made its debut. But in those two years, the line had been cooking up plans for two new classes: Splendor and Dream.

The two class' namesake ships -- 113,300-ton Carnival Splendor and 130,000-ton Carnival Dream -- entered the fleet in 2008 and 2009, respectively. Another Splendor-class ship was never built, but in 2011 and 2012, Carnival Magic and Carnival Breeze launched to complete the small, three-ship Dream class.

After four years of anticipation, Carnival changed the game when it debuted its newest and largest class, the Vista Class. Carnival Vista introduced the biggest changes the line had ever seen, with a number of firsts -- not only for the line, but also the industry. Among them were the first-ever IMAX theater at sea, the RedFrog Pub and Brewery (which signaled the first North America line to brew its own beer onboard), Cuba-themed Havana Cabana cabins, new Family Harbor cabins that come with their own lounge, and the SkyRide, an aerial biking track. The second, Vista-class ship, Carnival Horizon, launched in 2018 and was nearly identical to Carnival Vista, but also added its own unique touches. To name a few: a Dr. Seuss WaterWorks park, teppanyaki restaurant and Guy's Pig & Anchor Smokehouse Brewhouse (a combination of the ship's brewery and the barbecue joint found on a handful of ships).

Carnival Panorama, the third in the Vista Class, launched at the end of 2019, and is the first new Carnival ship based on the West Coast in two decades.

Related: Where You Can Cruise to Onboard Carnival's Newest Cruise Ship, Carnival Panorama

In 2020, Carnival will welcome a new class of ship when Mardi Gras enters service toward the end of the year. The ship will be a completely new style of ship for the line, with distinctly themed zones and a suites-only Enclave that comes with special perks.

Carnival sends its ships to dry dock every few years for routine maintenance and to ensure all ships have the latest branded spaces. The line's most recent refurb initiative -- fittingly named Fun Ship 2.0 -- has injected more than $500 million into the fleet. It includes the addition of Guy's Burger Joint (helmed by Food Network personality and Carnival partner Guy Fieri), BlueIguana Cantina and Tequila Bar, the RedFrog Rum Bar and the Alchemy Bar.