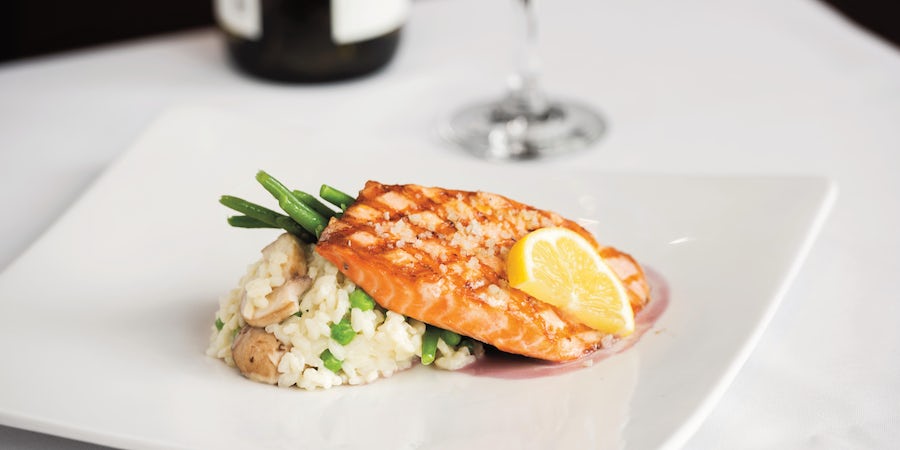 Wildlife, majestic mountains, spectacular scenery -- those images probably fill your fantasies about an Alaska cruise. But, add this to the picture: mountains of tasty vittles and scrumptious bits of scenery that will fill your stomach, too.

While Alaska produces some of the world's most prized seafood, like wild salmon and king crab, it wasn't always such a culinary wonderland. The sourdough-slinging gold miners left a meat-and-potatoes mentality that's slowly given way to more creative fine dining options and a "local and seasonal" attitude. You'll find more international flavors here now, too, and young chefs who have trained in the "Lower 48" then returned home to invigorate the food scene.

Here, we tell you everything you need to know about the feast that awaits in Alaska, including what to eat and where to find it -- whether on land or sea.

Alaskan bears gorge on wild salmon, and you should too. There are five different species available seasonally: pink salmon, silver salmon, king salmon, sockeye and chum. The two most desirable species are king and sockeye, so keep on the lookout for those. The least is chum, also known as keta or dogfish because they're fed to dogs. Keep an eye out for smoked salmon, too, particularly in the local favorite, smoked salmon spread.

The "Deadliest Catch" TV series made king crab a superstar, and you'll definitely find it on the menu here -- though any king crab that gets to you in the summertime will have been frozen because it's only fished during winter, up in the Bering Sea. There are actually three types of king crab; the most popular is red, and that's what you'll most likely be served. These monsters can weigh up to 20 pounds, with a leg span of 5 feet. The cost of king crab legs is a bit monstrous, too, so beware -- but for some, the sweet, meaty legs are pure heaven. Dungeness crabs thrive in Southeast Alaska, so you're likely to find them on menus when you go ashore. Due to Alaska's cold waters, Dungeness crabs here have sweeter meat than their brethren in the Lower 48, and they're more reasonably priced than their relatives.

Other Fish and Seafood

Halibut is a firm, white-fleshed fish that can be served many ways, from an elegant saute to fish and chips. Rockfish, a flakier, mild fish, is also common, as are other whitefish. You'll even find oysters in Alaska, where the cold water prevents them from spawning, so all their energy goes into being plump and delicious.

Related: The Best Time to Cruise Alaska: A Month-by-Month Guide

Reindeer prosciutto, anyone? You'll find farm-raised reindeer meat on menus in Alaska, but not moose, since wild meat can't be sold commercially.

You probably won't go out foraging for salmonberries, cloudberries, watermelon berries or wild blueberries during your visit to Alaska -- but you'll find jam made with a variety of local berries in gift shops. Spruce tips (the tender ends of a spruce branch) pop up flavoring caramels, syrup and jelly and seasoning savory dishes. Creative chefs are foraging even more far afield, picking and using the buds from Devil's Club, a cactus-like plant.

Related: Things to Do in Quebec City Before a Cruise

Bull kelp pickles and salsa are another popular gift item, as is sea salt, which you'll find in a variety of flavors.

Craft breweries are popping up all over Alaska, but the granddaddy of them all is Juneau-based Alaskan Brewing Co. They make eight year-round beers, as well as seasonal and special editions, like smoked porter and mocha milk stout. Look for special ingredients, like spruce tips, in Alaskan beers, too. Where to Find It

Many cruise lines serve local fish on Alaska itineraries. Oceania does an Alaska grilled fish night at its buffet restaurants, featuring fresh salmon, halibut and rockfish. The line also serves halibut fish and chips, using Alaskan Brewing Co. beer to batter the fish. You can wash it all down with cold ones from the same brewery.

There's a booming food scene in Alaska's capital city, fueled by young chefs and some culinary superstars. Right at the main cruise dock, you'll see Tracy's King Crab Shack, one of the best places for king crab legs and bisque in Alaska. Owner Tracy LaBarge is also a partner in McGivney’s Sports Bar & Grill, where the "hog wings" are a must. Catch Chef Beau Schooler's eclectic cooking at The Rookery Cafe, Panhandle Provisions and The Taqueria. He has won national recognition for his seafood, as well as James Beard Award nominations. A Mexican–Korean fusion restaurant might sound odd, but it works perfectly at V's Cellar Door; creative cocktails hit the spot, too.

For a taste of local kelp pickles, salsas and seasoning mixes, stop by the Barnacle stand, near other food stands by the dock. To try local brews, head to any bar or stop by the Alaskan Brewing Co. Depot gift shop, which operates a shuttle from the shop to their brewery (for a fee).

One of the best ways to get a taste of Juneau is to walk the city with Juneau Food Tours. They'll introduce you to everything from smoked-salmon spread to a fine dining restaurant that opens especially for their tours, wrapping it up with a sampler of local beer. You can book these tours independently, but Holland America and Princess also offer them as a shore excursion.

For a smorgasbord of Juneau sights and tastes, a Flavors of Juneau shore excursion includes the Mendenhall Glacier, a local cooking demo with samples at the Chez Alaska Cooking School (you can also book classes here on your own) and a trip to the Alaskan Brewing Co. Or, opt for a salmon feast at Taku Lodge -- and in this case, you make a dramatic entrance aboard a float plane. Don't miss having a drink cooled by real glacier ice. The classic Juneau offering is the Gold Creek Salmon Bake, where you'll dine on grilled salmon and buffet sides, but it can seem a bit rugged, both in terms of the facility and the level of the food.

Although Ketchikan's claim to fame used to be its "sporting women," in modern times its shops and restaurants are the attraction for visitors. The Alaska Fish House, on Salmon Landing, is a casual spot with water views and a menu that includes smoked salmon chowder, salmon burgers, salmon tacos, salmon salad and smoked salmon corn bread. For dining with a view, take the little funicular tram up to Cape Fox Lodge, where the menu includes a wicked crab dip, Alaskan cod tacos and halibut fish and chips, as well as sandwiches, burgers and adult milkshakes.

Our very favorite Ketchikan foodie experience is one that includes a George Inlet Lodge Crab Feast. You can choose to combine it with flightseeing, but we thoroughly enjoyed the version that takes you on a boat trip around the inlet, including pulling up crab pots (the cranky crustaceans get tossed back). Afterward, there are sweet, succulent all-you-can-eat crab legs with melted butter and sides back at the lodge. If you really want to catch what you eat, try a pricier guided fishing trip, where your catch is part of the lunch. Foodies should know that the Bering Sea Crab Fishermen's Tour, aboard a ship featured on the "Deadliest Catch," does not include a meal.

Sitka's short on foodie shore excursions, but you can always organize your own fishing trip and have the results frozen and sent home to you.

Not many Skagway shore excursions throw in food, but Liarsville Gold Rush Trail Camp & Salmon Bake will feed you a salmon lunch with salads and corn bread -- along with dancehall girls, melodrama and gold panning. The Burro Creek Waterfall Retreat & Crab Boil tour takes you to a lodge surrounded by hiking trails and waterfalls, where you'll have a Dungeness crab and shrimp boil with andouille sausage, corn on the cob and potatoes, plus a double-chocolate brownie topped with a marshmallow roasted over the campfire. While Alaska's largest city isn't a port, you may well spend time here if you're taking a land-based extension or flying in a few days early. For fresh seafood, artfully prepared, head to Kincaid Grill, a local favorite. Despite its name, Marx Bros. Cafe is a fine dining experience that includes items like halibut cheeks, king crab gnocchi, Neapolitan seafood mousse and oysters with pepper vodka-pickled ginger sorbet. Moose's Tooth is Anchorage's legendary pizza spot, where you can order pies with reindeer sausage among a long list of creative offerings; they also serve a variety of beers from their Broken Tooth Brewing company. Local ingredients even make it into ice cream at Wild Scoops. Look for flavors including Alaskan sea salt, spruce tips, coffee and seasonal berries. Anchorage Culinary Tours will take you tasting around downtown, including everything from appetizers to dessert, with some beer or wine parings as well.

Anchorage is a beer-lover's heaven, with a thriving craft brewing scene, including Anchorage Brewing Company, Midnight Sun Brewing Company, Resolution Brewing Company and King Street Brewing Company. Or, let Big Swig Tours take you on a behind-the-scenes tour to several craft breweries. Double Shovel Cider Co. will be a treat for hard cider fans, and if you like the really hard stuff, head to Anchorage Distillery, to sample vodka and gin made with Alaskan grains.