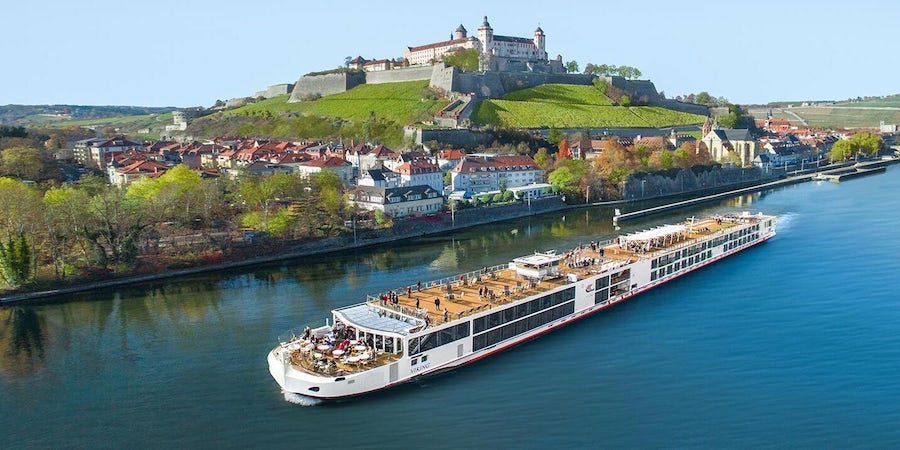 As the river cruise industry continues to boom, the choice of lines and ships is also increasing. Viking River Cruises, which celebrated its 20th anniversary in 2017, is pretty much a household name, thanks to its widespread marketing and position as the world's largest river cruise line. Gate 1 Travel, which was founded in 1981, is known more in the U.S. for its land tours. In 2016, however, the company debuted in the river cruise world with Monarch Empress, a vessel that it built and owns; the line also charters other vessels.

If you're curious to know the difference between a river newcomer and a veteran line, then read on for our Gate 1 Travel versus Viking River Cruises guide.

Gate 1 Travel has the marketing tag "More of the World for Less" and offers extremely competitively priced itineraries, with the majority of its cruises at least $1,000 less than Viking. Viking's extensive advertising, though, means it is constantly offering deals and promotions, such as free air travel. It should also be noted that the price of river cruises fluctuates throughout the year, depending on the date of travel, itinerary and time of booking.

With both lines, U.S. travelers have the choice of booking cruise-only or fly-cruise itineraries. Both lines require a nonrefundable deposit, generally $300 per person for Gate 1 and $500 for Viking. With Viking, the balance has to be paid 90 days before the date of the cruise, and with Gate 1 it is 60 days. Both lines sometimes require full payment at the time of booking if the fare is advertised as special.

As a mainstream tour operator, Gate 1 Travel can offer a "one stop shop" for booking a vacation that includes a tour (or more) and a cruise, which is attractive for passengers who have more time to stay Europe. Viking offers pre- and post-cruise packages, which are usually two- or three-night city breaks.

Related: Seattle vs. Vancouver: Where Should You Start Your Alaska Cruise?

There are marked differences in areas such as meals and the included beverage offering that reflect the price differential between Gate 1 and Viking. Viking includes wine, beer and soda with lunch and dinner and Gate 1 includes drinks with dinner only, plus the evening dinner menu is more limited.

Both Gate 1 and Viking include daily shore excursions in their fares, which are typically guided walking tours around town and motorcoach trips to visit castles and sites of interest. Both lines use local guides and passengers are issued personal audio headset systems so they don't miss a word or have to cluster around the guide to hear what is being said. Both lines offer additional excursions, such as theater performances, for an additional fee.

With Gate 1 Travel, there is never more than one included excursion per day, and all of them last approximately two to four hours. Longer trips, such as daylong excursions to places such as "The Sound of Music" city of Salzburg are all part of its optional for-fee tour program, which can be booked in advance for a 10 percent discount or once onboard.

Viking places a big emphasis on its included excursion program. Each day a large proportion of the cruise director's talk is a detailed rundown of the next day's itinerary, which often features up to two included tours per day. Viking is particularly good at catering for people with varying levels of mobility through the option of slow-paced or faster tours (although in common with all lines, excursions are challenging for wheelchair users).

When it comes to size, Viking stands head and shoulders above Gate 1 Travel (and every other line). It is the world's largest river cruise operator with a fleet of 65 ships, the majority of which make up its fleet of 190-passenger European Longships. It has its own ships in Russia, leases ships in Asia and is launching a totally refurbished ship in Egypt in 2018. Viking sails on the Danube, Rhine, Main, Rhone, Saone, Seine, Elbe, Douro, Nile, Mekong, Irrawaddy, Yangtze and the waterways of Holland, Russia and the Ukraine. Additionally, with its fleet of ocean ships it also offers two combined river and ocean vacations that cover the Rhine and Norwegian fjords and the Rhine and Mediterranean.

Due to its size, Viking has by far the greatest choice of itineraries and travel dates. With such a large number of vessels, it is very well positioned to deal with low and high water levels, which can sometimes cause cruise disruptions in Europe when ships are unable to sail. In this instance, Viking can move passengers from ship to ship to minimize the impact of these issues.

Both lines are firmly aimed at the English-speaking markets. On Viking, U.S. passengers can expect the majority of their shipmates to be from North America, with a smattering of Brits, Canadians and travelers from other countries. As Gate 1 Travel also actively markets in Australia, there will be a fair number of folks from Down Under on every cruise. This can make the onboard atmosphere more fun as some of them are younger than the traditional 55+ river cruise demographic and they tend to stay up later at night. Both lines draw their crew members from a variety of countries that line the route of their European itineraries, such as Germany, Hungary, Slovakia, Bulgaria and Romania. On both lines, the crew members are very professional, friendly and speak excellent English. This is an area where there are quite a few differences between Gate 1 Travel and Viking. Viking's 95-cabin Longships have the same layout and configuration, and are all decorated in tasteful, muted tones. The Veranda Cabins are 205 square feet, including the walkout balcony, and French Balcony cabins, where you can look out rather than step outside, are 135 square feet. Lower deck cabins, that have a fixed window, are 150 square feet. Veranda Suites, which have a separate bedroom and living area, are 275 square feet and two-room Explorer Suites (two on each Longship) measure 445 square feet.

Gate 1 Travel ships are smaller in size and decorated in richer colors with vibrant splashes of contemporary artwork. They have 72 staterooms -- 64 standard cabins and eight suites -- that range in size from 140 to 210 square feet, all cabins are river-facing and a total of 58 have French balconies. The lower deck cabins have fixed windows that do not open. Other standard cabins measure 150 or 170 square feet. In the suites, the extra space is devoted to larger bathrooms and a bigger living area.

Gate 1 Travel cabins have thoughtful details such as an alarm and phone that is conveniently situated next to the bed, not on the dressing/table desk area at the opposite side of the stateroom. The majority of cabins also have a fixed seat running along the back wall of the shower and robes are provided in all standard cabins (on Viking you have to ask for them and most passengers don't realize they are available).

Choose Viking if you want balconies and proper suites

Viking has a high proportion of balcony cabins, and the balconies are furnished with two chairs and a small table. The Explorer Suites are proper suites with a separate living and bedroom area, rather than the larger one-room cabin on Gate 1 Travel.

When it comes to mealtimes, there are substantial differences between Gate 1 Travel and Viking. Personal taste will play a major factor in deciding which line to book. Viking has a much greater choice, and will suit passengers who prefer full-service, a la carte meals with a selection of dishes for every course.

Both lines serve breakfast with made-to-order items in addition to a buffet. At lunchtime, Viking has both a buffet and served a la carte menu, and in the evening, it is a full-service a la carte dinner. Viking also offers an alternative light lunch and dinner in a separate venue at the front section of the lounge.

With Gate 1 Travel, there is just one main dining room. Lunchtime features a buffet along with one soup, hot sandwich and dessert that can be ordered from the menu, but there is no choice. In the evening, there is a set appetizer, soup and dessert and the only choice is from three entrees -- a fish, meat or vegetarian dish -- or the two "always available" items. This can be a problem for vegetarians who often have to skip the appetizer and soup or make do with a simple green salad instead. Viking includes beer, wine and soda with lunch and dinner and Gate 1 Travel includes the same with dinner only. Both lines have 24-hour complimentary tea and coffee stations and neither offer room service.

If you don't drink or an occasional drinker you will effectively pay for beverages you don't consume on Viking. Gate 1 Travel will suit you best as drinks are only included with dinner.

The Aquavit Terrace is a unique feature at the front of Viking's snub-nosed Longships and a lunchtime buffet is served here every day.

Both lines offer an enrichment program, when the ship is sailing and in port. Viking's is the most comprehensive and immersive, with illustrated talks on a country's history and geography, language lessons, demonstrations, talks and performances by visiting singers and dancers.

Gate 1 Travel offers some of these, albeit to a lesser degree, but where it stands out over Viking is the daily program of activities. It placed an entertainment director on its cruises in 2017 and the schedule will include things such as darts, mini-golf and petanque tournaments, bingo, several prize quizzes and hikes ashore.

Both lines have a resident onboard pianist and musician who plays at various times throughout the day. Again, Gate 1 Travel comes out tops in this category as it has a daily stretching class hosted by the entertainment director and a small gym. Viking has neither. Both lines have walking tracks on the sun deck but do not carry a fleet of onboard bikes.

Both lines have elevators (not down to the lowest deck with Gate 1) free Wi-Fi and a for-fee laundry service.

Gate 1 Travel is unbeatable as a value-for-money line that provides a good cruise experience on quality ships but with fewer inclusions. Viking is great for travelers who are happy to pay higher fares to get more for their money, including drinks with lunch, additional menu options and dining venues, and a greater choice of excursions.