You may also like
Dismiss
In Case of Rain: A Guide to Australia Cruise Ports in Wet Weather
Pros and Cons of Taking a Mediterranean Winter Cruise
Summer Cruises vs. Winter Cruises
Things to Do in Red Hook (Brooklyn) Before a Cruise
Coastal Cruise Tips
The Best Month to Cruise Hawaii
Best Months to Cruise the Mediterranean
South Pacific Cruise Packing List
Cruise Vision 2020: The Future of Cruising in Australia and New Zealand
North Sea Cruise Tips 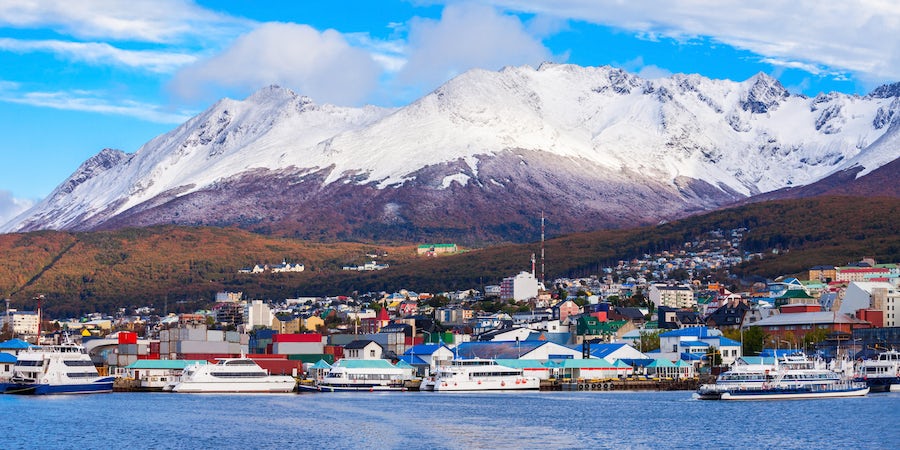 Patagonia is a vast, sparsely populated region that makes up the bottom half of South America and is shared by Argentina and Chile. At its very tip, it breaks up into a series of islands known as the Tierra del Fuego archipelago, which are situated near the Straits of Magellan, the Beagle Channel and Cape Horn. There is just one cruise line that operates expedition cruises (also known as Chilean fjord cruises) in this region: Australis. This Chile-based line will have two ships specially designed to navigate the narrow fjords and shallow bays in this region by January 2018.

It's an area of breathtaking beauty -- steep-sided cliffs, waterfalls that tumble into the sea, awe-inspiring glaciers and tiny, uninhabited bays. It also boasts a wide variety of wildlife including penguins, whales, seals and dolphins. However, apart from when you're at the penguin colony, spotting other wildlife is far from guaranteed. One of the absolute highlights is landing at Cape Horn, where at its southernmost tip Antarctica lies just 600 miles away.

To help you prepare for your Patagonia expedition cruise, here are our top Patagonia travel tips.

The best time to cruise the Chilean fjords -- in fact the only time -- is September through April; the rest of the time the area is un-navigable, due to weather and sea conditions. However, the weather varies at any time of year and it is advisable to take cold weather clothes at any time of year. Probably the best time to cruise is January/February, the height of summer, when the weather is most clement and seas are calmest. Being so far south, the phrase "height of summer" might be slightly misleading -- temperatures rarely go above the high 60s (low 20s centigrade) at any time of year.

There is only one line (Australis) that offers Patagonia cruise travel through the Chilean fjords. However, there are many lines including Seabourn, Silversea Expeditions, National Geographic and Lindblad that call in at Ushuaia, either on a South America cruise or more often en route to Antarctica. Australis offers in-depth explorations of the region, with highly knowledgeable guides on every cruise. The ships all carry Zodiacs to get you up close and personal to wildlife and glaciers, and allowing passengers to board at the tiny ports.

Note, this is not hardcore expedition cruising -- you'll never have to get your feet wet as the guides very kindly bring along a metal ladder that they hook to the side of the Zodiac on land, and the excursions are gentle walks, rather than grueling hikes, though there are tougher options for the more adventurous. Onboard, life is comfortable, with good-sized cabins, excellent local food and lectures or documentaries about the area shown every evening. Australis offers three-, four-, five and seven-night cruises, all of which either leave from Punta Arenas, Chile, and sail to Ushuaia, Argentina, or the reverse.

The most popular ones are the four-nighters, which take in all the highlights including a call at Cabo de Horno (Cape Horn), the most southerly point on earth that is inhabited.

On all itineraries, you'll see spectacular scenery, including glaciers and waterfalls, as well as the chance to spot wildlife.

The ship spends most of its time navigating the patchwork of fjords and islets that are scattered around here, including the biggest island -- Tierra del Fuego, which the archipelago is named after. However, it does venture out into the open sea for a short navigation, before returning to the archipelago and dipping in and out of Chilean and Argentinian shared waters.

Punta Arenas: The southernmost town in Chile is a dusty, wind-swept place that seems bleached out and abandoned. It has a real frontier feel to it, and its main claim to fame is being featured in English writer Bruce Chatwin's classic travelogue "In Patagonia," in which he describes it in much the same way. It's not somewhere you want to spend much time in -- most passengers fly here from Santiago in the morning and board the ship in the afternoon.

Ainsworth Bay: This is a beautiful, unspoiled island, which houses a pristine, sub-polar forest: one of the few places in the world with this type of habitat. It's a bit like stepping back in time: The trees are covered in moss (which is a good sign: it shows how pure the air is) and the wooden path takes you past streams, peat bogs and waterfalls -- you half expect a brachiosaurus to come lumbering past at any moment. The island is home to a large number birds and also a colony of Southern elephant seals -- but you'll be lucky to spot them. The most striking sight is the Marinelli Glacier in the distance, which acts as a backdrop to your day, shimmering in the distance.

Tuckers Islets: Home to 4,000 of the small Magellan penguins, these islands are reached via a Zodiac boat ride. The boat drivers get you as close as they can, almost beaching the Zodiacs, but you are not allowed off to explore. You'll also spot other marine birds including a cormorant colony, geese, skuas and gulls.

Pia Glacier: This is a wonderful Patagonian cruise highlight as it allows you to get as close as you're allowed to a glacier and if you time it right, you'll be able to catch it calving (chunks falling off). The best time to come to watch this is high summer, when it's warmest and the glaciers are melting. Hang around long enough and you could get lucky. During the stop, you'll be able to take a walk or a hike along a path through forests and brush to a vantage point that allows you uninterrupted views of the whole glacier.

Glacier Alley: Not a port, but a sailing up the aptly named fjord where there are glaciers on either side for several miles. As they melt they form stunning waterfalls, which cascade directly to the sea. Most people set up a camera on a tripod either in their room or on the top deck with a cup of hot chocolate and watch the extraordinary landscape pass them by.

Wulaia Bay: Another beautiful bay, most famous for an 1859 uprising led by an indigenous Yamana man -- Jemmy Button -- who was captured by Captain Robert FitzRoy of the Beagle, taken to England, "civilized" there and then returned. Today you can visit the Australis-sponsored museum in the old radio station, which has an extensive and detailed history of the Yamana. Australis offers a choice of three hikes of varying difficulty. Do make sure you drop a postcard into the wooden mail barrel inside the museum -- the next passengers will (hopefully) hand deliver it to the address.

Cape Horn: Cape Horn is the southernmost inhabited point in South America (there are two uninhabited islands that lie nearer to Antarctica, the Diego Ramirez Islands). The highlights are a monument to the many people who have lost their lives in the Drake Passage, and the spot where the Atlantic and Pacific oceans meet. There is a permanent manned lighthouse, run by a senior officer in the Chilean naval fleet, who is based here for a year with his family, before being replaced. You can visit the lighthouse and the chapel and get a souvenir. It's a highlight of any Patagonia cruise, and yet it's not even certain you'll be able to land as the captain makes a decision based on how rough the sea is that day; landings are made on only about three-quarters of all voyages. You'll need to be in good shape for this landing -- after getting off the Zodiac you're faced with a steep staircase to the wind-swept top of the tiny island.

Ushuaia: Ushuaia, the final, or first, port stop depending on your itinerary, is Argentina's most southerly town and stands in stark contrast to Punta Arenas: bustling and prosperous, it's set against a stunning background of mountains, and strung along the pristine waters of the Beagle Channel. This is a town that has grown rich on tourist dollars and is the main stopping-off point for cruises to Antarctica. It has a thriving main street, mainly consisting of expensive outdoor clothes and hiking boot specialists. Sites worth checking out include the former prison and a nearby penguin colony. It's well worth spending a night or two here. Take a wide variety of warm and cold weather clothes and shoes. The weather round these parts can change suddenly and dramatically: A shore excursion that starts with a light breeze and sunshine can turn to a squall and strong winds within minutes. There are times when you'll be rushed back to the ship early because of an approaching weather front. So even if you're going in mid-summer, bring everything you need for a winter cruise, including fleeces, hiking boots and a windbreaker/waterproof jacket. If you've got space for rain boots (wellingtons), pack them -- they are often of more use than hiking boots when it's been raining and it's muddy. The key is to wear layers and carry a backpack in which to carry all your discarded clothes.

Stay hydrated. Australis provides a smart little water bottle in every cabin for a reason. Even if it's cold outside, take a water bottle along as you are likely to need it on the longer excursions.

Follow instructions. Don't get up when you're on a Zodiac to get a better picture. Hold the guide's hand (or elbow) as you get on and off the Zodiac. Stick to the paths, many of the plant life is unique to this area and doesn't do well being trampled on. When the guides say it's time to go, it's time to go: 'Don't try and snap a final pic, you might get stranded.

Bring a D-SLR camera and a GoPro. An iPhone or Samsung Galaxy is not enough to capture the extraordinary natural beauty of this area. Our recommendation is to invest in a good quality SLR camera and a zoom lens -- that's the key accessory, so you can capture both wildlife and the natural landscape, plus a tripod, for when you are sailing through the fjords. A GoPro (or similar) is ideal for capturing any calving glaciers and while you are on walks and hikes.