You may also like
Dismiss
Carnival Journeys Cruises on Carnival Cruise Line
Coastal Cruise Tips
8 Reasons To Do Long Cruises with Holland America Line
A Voyage of Ice and Fire: Cruise to These 'Game of Thrones' Filming Locations
11 Best Whale Watching Cruise Shore Excursions
The 10 Most Beautiful Lakes You Can Cruise To
6 Cruise Ports and Regions That Have Banned Sunscreen (and What to Use Instead)
Pictures of Carnival Panorama
Amsterdam Cruise Port Terminal: Parking, Address & Amenity Info 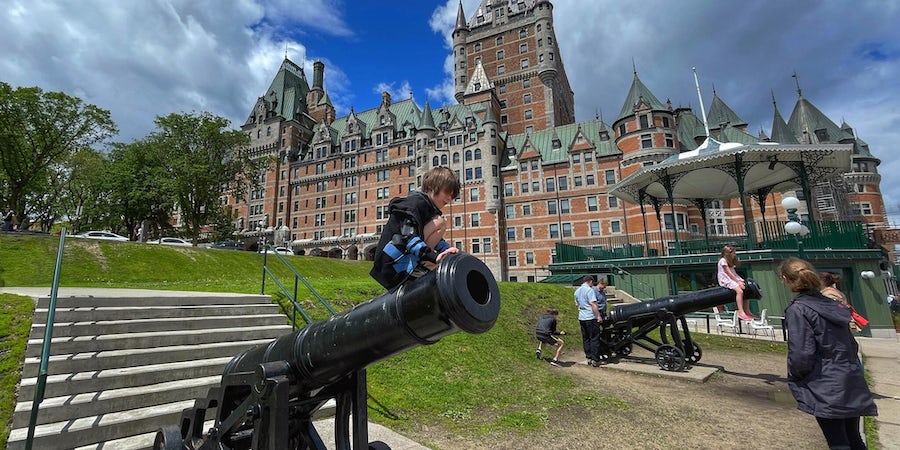 Six Reasons to Cruise Canada and New England in Summer

Cruisers with a yen for fall color might look to the New England coast and Canadian Maritimes as *the* go-to spots for dazzling scenery. But lots of qualities make these locales just as eye-popping in summer.

So it’s no surprise that a number of cruise lines have added or expanded summer itineraries to New England and the Maritimes, which might also include stops in cosmopolitan ports like Quebec City and Montreal.

For instance, Holland America Line] returned to the region in May 2022. In 2023, Canada/New England cruises will embark as early as April.

“They go to the nicest places,” says ACL spokeswoman Alexa Paolella. “The coast is spectacular in summer, and this is the most beautiful way to see it.”

Another incentive: Easy access, with no overseas flights required.

Fresh off a June 2022 sailing, here are six reasons we’d hop aboard in summer in a heartbeat.

Temperatures are mild and sunshine is abundant. Daytime averages are in the upper 70s to low 80s, and nights are refreshingly cool. Cold temperatures come early to this region, and fall can be downright chilly. As a guide in Halifax, Nova Scotia, quipped, “We have two seasons. One is winter. The other is getting ready for winter.” Accurate or not, June, July and August are the region’s sweet spots for weather.

Yes, like almost all seafood, you can find lobster on the menu any time of year. But there’s something about cracking open a whole steamed crustacean ordered from a dockside shack and consumed at a waterfront picnic table. No bib required. And because lobster rules in these parts, there are myriad ways to enjoy it – from a classic lobster roll, to lobster mac ‘n’ cheese to lobster poutine.

Not only are you certain to get more pool time on board the ship during a New England/Canada summer, but you can seek out one-of-a-kind swimming beaches, as well.  Tiny Prince Edward Island boasts 23 swimmable beaches, including popular Greenwich Beach, backed by giant, ever-changing parabolic sand dunes. Baddeck, in northern Nova Scotia, is home to Bras d’Or Lake, an international draw for sailing and water sports. And in Acadia National Park in Maine, Echo Lake is where to take a dip. The fresh-water lake is warmer than the ocean, and the beach has lifeguards in summer.

Winters are lengthy in this part of the world, so come summer, locals make the most of long, light-filled days with non-stop celebrations. As one Montrealer told us, “All the fun stuff happens between June and August. After all, It could be snowing in the fall.” Montreal stages multiple major festivals, including internationally acclaimed jazz and comedy festivals in June and July, and the Montreal First Peoples Cultural Festival in August. Halifax Buskers Festival draws top street performers from around the globe in late July. The blowout Boston Harborfest lights up the night sky over the July 4th weekend. Even if your sailing dates don’t sync with major events, there’s bound to be special summertime doings in most ports.

Hit the water under your own power in a kayak or canoe. Paddling is more fun when you’re not fending off a chill. Kayaking is popular in the calm waters off Bar Harbor, Maine (be on the lookout for seals and porpoises). On the marshy waters off Cape Cod, Mass., bring your binoculars for birdwatching. In Baddeck, Nova Scotia, rent a boat at Bras d’Or Lake and make the short crossing to Kidston Island, site of the Alexander Graham Bell family summer home.

Yes, autumn brings the spectacular oranges, reds and yellows the region is renowned for. But summer wows with its own bold hues. Spring comes late and the heavenly scent of lilac blossoms lingers well into June, as do beds of plump tulips and lush rhododendron bushes. And you’ve never seen more shades of green than in the Acadian forests in this neck of the woods.