You may also like
Dismiss
7 Best Papua New Guinea Cruise Tips
Best Month to Cruise to the Panama Canal
Sailaway With Jane McDonald Cruise
Taster Cruises: What They Are and Where to Take Them
Festival at Sea: Immerse Yourself in African American Culture on the High Seas
Jazz Theme Cruises
Country Music Cruises
Rock Cruises for Music-Lovers
7 Things to Know About Holiday Singles Cruises
Groove Cruise Miami 2021 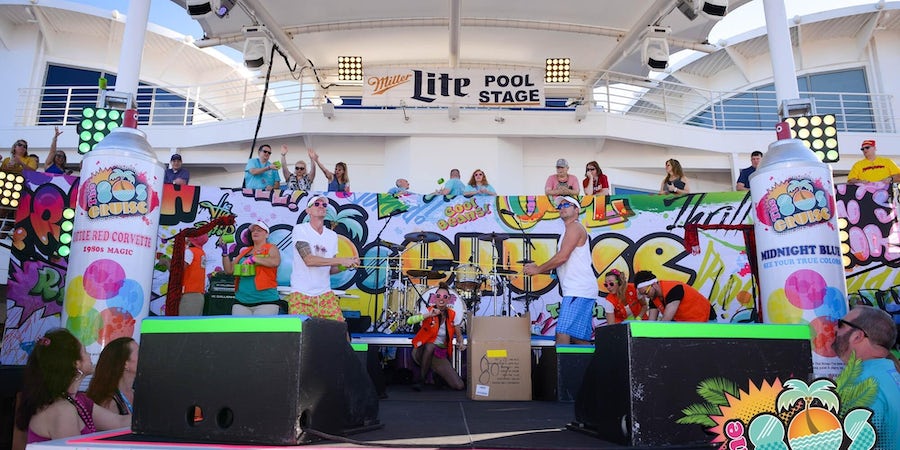 From 80s Cruises to Classical Sailings, Don’t Miss These Music Festivals at Sea

The Pool Stage on the 2017 80's Cruise (Photo: The 80's Cruise)
Kerry Spencer
Contributor
On This Page

There is a plethora of voyages on the horizon to meet British holidaymakers' growing demand for music cruises -- particularly sailings that take on an 80s theme. While some festivals at sea offer the chance for passengers to meet the stars, with autograph signings and Q&A sessions taking place onboard, others take on a decidedly glamorous tone that will be sure to leave passengers feeling like VIPs.

We've rounded up some of the best festivals at sea to see you through 2018. We'll also add more itineraries when they're released, so don't forget to check back.

Itinerary: This three-night sailing departs Newcastle with calls in Amsterdam and Zeebrugge (for Bruges) before ending in Southampton.

What It Is: Marella (formerly Thomson) Cruises has revealed plans for a special 80s cruise -- a first for the line -- that will mark Marella Discovery's final sailing out of Newcastle for the season.

Eighties-loving passengers will get to experience a heady dose of their favourite decade, with former Radio 1 DJ Sara Cox headlining on the Sunday, with a guest appearance from Carol Decker of T'Pau, and Trevor Nelson headlining on the Monday. Passengers can expect special 80s-themed DJ sets, Ministry of Sound sunset pool parties, featuring DJs Adamski and Brandon Block, a Guilty Pleasures Party, classic 80s movies and a silent disco, as the ship sails across the North Sea. Fares from £615 per person based on two adults sharing an inside cabin.

Throwback: The 80s Festival at Sea

Itinerary: A three-night return sailing departing from Southampton, with a call in Zeebrugge (for Bruges).

What It Is: Organised by Floating Festivals and set to take place onboard Royal Caribbean's Navigator of the Seas, Throwback will give 80s lovers the chance to indulge in a mini-cruise full of their favourite music while sailing across the North Sea. The itinerary features pop icons Jason Donovan; Chesney Hawkes; Sonia; Imagination, featuring Errol Kennedy; The Human League; OMD and Erasure's Andy Bell, plus guest DJ Pat Sharp. Floating Festivals promises to completely transform the ship into a shrine to the 80s, featuring hit TV shows, movies and quizzes. Fares from £599 per person.

What It Is: Join Rick Springfield and other stars for the third 80s Cruise, onboard Celebrity Summit. Rocking big hair and neon spandex, 80's-lovers can enjoy concerts day and night as well as a myriad of themed activities such as costume parties, "Let's Get Physical" aerobics and Q&A sessions with the artistes. Although no official meet-and-greet has been announced, the charter company hints there's a good chance you might run into one of your teenage celebrity crushes onboard. Fares from $2,600 for an inside cabin, based on double occupancy.

Itinerary: A seven-night return sailing departing from Southampton, with calls in Bilbao, Vigo and Lisbon.

What It Is: Organised by Australian cruise provider Cruiseco, this 80s-themed sailing takes place onboard Royal Caribbean's Navigator of the Seas with headliners including Tony Hadley, ABC, Kim Wilde, Belinda Carlisle and Paul Young. The bill is likely to bring about a sense of nostalgia for passengers with hits such as "Kids In America," "Heaven is a Place on Earth," and "Every Time You Go Away" belted out as the ship makes its way to Spain and Portugal. Fares start from £1,550 per person based on double occupancy of an interior cabin.

Itinerary: A four-night return sailing from Southampton with a call in Amsterdam.

Related: Taster Cruises: What They Are and Where to Take Them

What It Is: The second cruise by Floating Festivals -- Stages: The Musical Theatre Festival At Sea -- also takes place onboard Royal Caribbean's Navigator of the Seas and features big name Brit artistes Beverley Knight and Michael Ball as headliners. A host of other West End stars will be onboard to perform, including Lee Mead ("Joseph and the Amazing Technicolor Dreamcoat" and "Wicked"), John Owen-Jones ("Les Miserable" and "Phantom of the Opera") and Sophie Evans ("The Wizard of Oz" and "Wicked"). Floating Festivals has confirmed that an autograph session and Q&A will take place onboard, plus Broadway trivia, musical workshops, a musical lip-sync battle, a "Wicked" game show, musical movies and a Red Carpet Promenade Party. The sailing starts from £799 per person.

Bravo! A Cruise of the Performing Arts

Itinerary: A seven-night return sailing from Southampton calling at Cherbourg France, and Vigo and Bilbao in Spain.

What It Is: Set onboard the stylish Celebrity Silhouette, Cruiseco's first ever Bravo! A Cruise of the Performing Arts takes on an operatic musical theme with headliners mezzo-soprano Katherine Jenkins (OBE) and tenor Alfie Boe. This special sailing will also feature performances by Wynne Evans, Ruthie Henshall, Mirusia, The Celtic Tenors, Julian Lloyd-Webber, plus the Jonathon Welch choir, while The National Symphony Orchestra will accompany all headline performances in the Silhouette theatre. A highlight of the itinerary is set to be an exclusive private tour and reception at the Guggenheim Museum in Bilbao. Fares start from £1,890 per person, based on double occupancy of an inside cabin.

Itinerary: Round trip from Barcelona, with calls in Cannes, Ibiza and Palma.

What It Is: Anchored is a stylish affair that is set to return in 2018 following the success of the first sailing in 2017. With a dance music theme -- think Global Gathering meets the VIP area of V Festival -- Anchored visits some of the most glamorous ports in the Western Mediterranean. Taking place onboard Royal Caribbean's Vision of the Seas, the sailing boasts pool parties, top-name DJs and 24-hour bars and cocktail stations. Although the full line-up for 2018 has not yet been released, passengers can expect an elegant party atmosphere, celebrity guests and a serious hangover when they disembark. Prices start from £899 per person based on three people sharing a cabin, or £999 per person based on two people sharing.

Itinerary: Return sailing from Miami with calls in Key West and Cozumel.

What It Is: Satisfy your 90s nostalgia on the Ship Hop cruise, featuring some of the biggest names of the decade, including: Vanilla Ice, Salt-N-Pepa, Sisqo, Coolio and other pop-hip-hop icons. The cruise, which takes place on Carnival Sensation, will treat fans to concerts, panels, meet-and-greets and other themed activities as the ship makes its way around the Gulf of Mexico. Fares start at $799 for an inside cabin, based on double occupancy.