You may also like
Dismiss
Scam or Deal: Will That Cruise Sale Really Save You Money?
Is There a Best Day to Book a Cruise?
A Look at Alaska's Top-Rated Cruise Ports
What Is an Alaska Inside Passage Cruise?
Polar Cruising: An Arctic and Antarctic Expert Shares Her Experiences
A Caribbean Cruise: Diving into the Depths
Craving an Immersive Cruise to Cuba? Come Along With Us
How Do You Create a New Alaska Cruise Experience?
Holland America FAQ 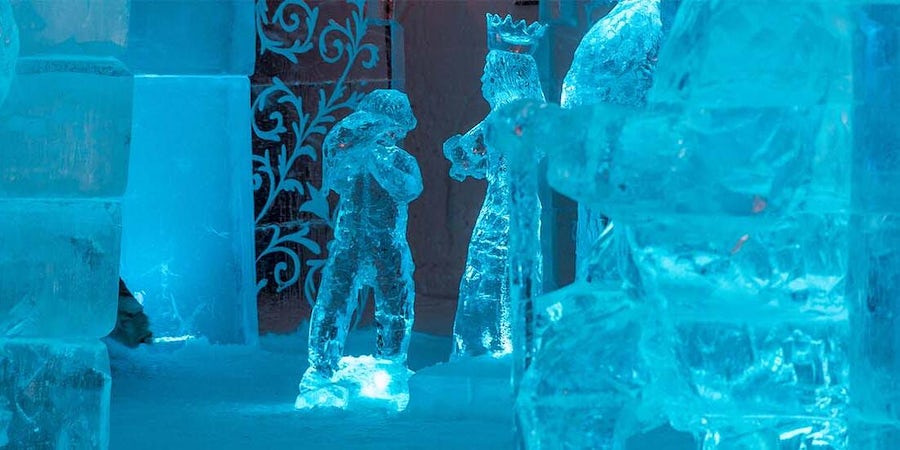 A Night at the Ice Hotel in Norway With Saga Cruises

I’m drinking a warming vodka cocktail in the most fairytale-like setting imaginable; a vast, blue-white ice palace, filled with intricately carved mythical ice figures of goblins, Norse gods and mythical creatures, lit in different colours from the inside. It feels like a scene from "Frozen". Outside is an endless wintery landscape of iced-over rivers, dense forest and deep snow. If the sky is clear, we’re hoping for a glimpse of the Northern Lights. Inside, though, deeper into this giant igloo, is where I’m going to sleep, swaddled in fleeces and woolly gloves, a long way from my toasty cabin on Saga Sapphire, which is overnighting in the Norwegian port of Alta.

Only a handful of cruise lines operate in Norway in winter so this overnight tour offered by Saga Cruises is a pretty rare opportunity (P&O Cruises does it, too). You leave the ship behind and spend the night, including dinner and breakfast, at the Sorrisniva Igloo Hotel, half an hour’s drive from Alta, deep inside the Arctic Circle.

Like other ice hotels, the Igloo Hotel is built in autumn and allowed to melt away in spring. The actual ice structure, where you sleep, is joined by a corridor to a wooden lodge, where there’s a restaurant, a lounge area, the reception and, importantly, a roaring fire.

The excursion includes a tour of the Igloo with a vodka cocktail in a glass made of ice, dinner, overnight and breakfast. We were told to bring thermals -- but everything else is provided.

The igloo itself is a phenomenal piece of engineering; at 2,500 square metres, it’s the largest in Norway and the northernmost in the world. There was a sense of excitement as we marvelled at the sculptures, which change every year, and the ice wedding chapel. The bedrooms, such as they are, are 30 enchanting little caves off a corridor of ice, each one with a curtain instead of a door and a sleeping platform made of ice and strewn with reindeer pelts. There are no windows. You don’t clutter up your bedroom with possessions, mainly because things would freeze; they go in a locker instead.

Dinner is in the main lodge, which is built to resemble a Sami tent, with a roaring fire under a high, pointed ceiling. Most people had reindeer stew, which received effusive praise, although I opted for salmon, which was excellent. Vegetarian dishes are available on request.

There was a strange sense of anticipation over dinner; it’s odd, being on a tour where the main part of the experience is sleeping. I didn’t want to go to bed early and I certainly didn’t want to drink much as it was a long, cold schlep from the ‘bedroom’ to the loo, which is in the main lodge.

A few of us went for a walk under the moonlight, tramping down through snowy fields to the Alta river, which gushed along under a thick layer of ice, dark forest on the other side. The aurora didn’t appear for us but the crisp snow, the cold air, the glittering stars and the monochrome, moonlit landscape were magical in themselves. But the moment of bed time could be put off no longer. Thermals, hats and gloves on, into the sleeping bags and onto the ice platform, with its rather smelly reindeer skins.

First problem: the light in our little cave was embedded inside a column of ice so I couldn’t turn it off. I need total blackout to sleep. Second problem: it was so still. The air didn’t move. The ice walls muffled all sound. I could hear my own heartbeat. I wasn’t cold, as such, just uncomfortable. Every time I shuffled around in my sleeping bag, my hat came off. I tried every trick to get to sleep (meditating, counting reindeer), gave my poor partner an angry kick for gentle snoring, raged quietly for a bit and in the end, resorted to a sleeping tablet.

I woke at 6 a.m., toasty but stiff and bleary eyed. I pulled on my boots and walked past the goblins and ice squirrels into the main building, where it was warm and cosy, the fire still crackling, the blue dawn just beginning to break outside. I had to laugh; every armchair in the lounge was occupied with a rather grumpy Saga guest; clearly, a lot had not lasted the course in the igloo. We fell on the hot breakfast buffet like a pack of hungry wolves, probably all longing for the same thing: the hot showers back onboard the ship and a soft bed.

Related: What to Pack for a Road Trip Pre-Cruise

If you have £299 to spare and really want to say you’ve done it, yes, and even more so if the aurora forecast is good as you’re a fair way inland, where the skies tend to be clearer. But day visits are offered, too, at £59, on which you’d still see the ice hall with the sculptures and enjoy the vodka cocktail. Without doubt, this is a once-in-a-lifetime adventure, but it is expensive. I don’t mind paying extra for drinks but there was a fee to use the hot tubs, too, which seems excessive.

Expect an experience but not necessarily a comfortable night’s sleep. A thermal hat and gloves are essential. If you’re allergic to animal hair, sleeping on a reindeer skin might be uncomfortable. They smell a bit, too. If you’re claustrophobic, I’d say, just do the afternoon visit as you’re sleeping in a smallish, enclosed space with very still air and complete silence, which I found disconcerting (and I’m not claustrophobic at all). Some of our fellow passengers were quite elderly and, I thought, pretty brave to attempt this. I don’t think they enjoyed the sleeping part, although everybody agreed that the overall experience was a real adventure.