You may also like
Dismiss
Hurricane Irma: A Look Back At the Storm
Q&A: What Does the Vacation of the Future Look Like?
7 Easy Things You Can Do to Help the Environment When You Cruise
Are Cruise Ships Allowed in Venice? Background on a Historic Port With an Uncertain Future
What Is the Economic Impact of the Cruise Industry in the United States?
What Happens if My Cruise Line Goes Bankrupt?
Why Germ-Zapping Robots and AI Technology Could Be the Future For Cruise Ships
Will I Have to 'Social Distance' on My Next Cruise?
How To Cope With Cruising's Pause? Plan Far, Far Ahead
Step By Step: How to Submit Comments on Cruise to the CDC 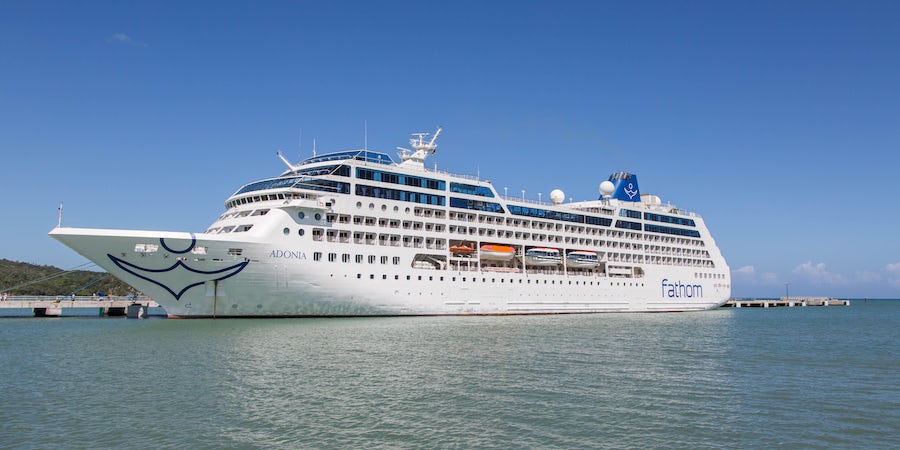 Like just about every industry the world over, the cruise sector has seen its fair share of companies come and go, from small lines we barely remember to beloved lines we never thought would go away.

Here are just a few of the many defunct cruise lines that used to be part of the cruise industry.

The parent company of several cruise brands, American Classic Voyages operated between 1993 and 2001. It's best known brands were Delta Queen Steamboat Company and American Hawaii Cruises, though it also operated Delta Queen Coastal Voyages and United States Lines. The company declared bankruptcy in 2001, and all sailings were canceled except for those on Delta Queen, which continued running through early January 2002.

Related: What Is a Cruise to Nowhere, and Why Aren't They Allowed From U.S. Homeports?

Royal Caribbean Cruises Ltd. introduced CDF Croisieres de France in September 2007 as a means of expanding its reach in Europe, where it already operated Spain's largest cruise line, Pullmantur. The line, which was targeted specifically at the French-speaking market, debuted its first ship, Bleu de France, in May 2008 with a season of Mediterranean cruises departing from Marseille. In November 2012, CDF replaced Bleu de France with Horizon, which was transferred from Pullmantur Cruises. Another ship, Zenith, joined the fleet in 2014. In 2016, Royal Caribbean sold a controlling stake of Pullmantur, under which CDF was by then operating, to a Spanish company, and CDF ceased operations in early 2017.

Celebration Cruise Line was a one-ship party cruise line that operated two-day voyages out of the Port of Palm Beach to Grand Bahama Island between 2009 and 2014. Its ship, Bahamas Celebration, hit an unidentified object near Freeport in October 2014, ripping a hole in the hull and grounding the ship. The line went out of business shortly afterward. Former Celebration Cruise Line executives then founded Bahamas Paradise Cruise Line, which offers the same types of cruises as its predecessor.

Founded in 2005, Cruise North Expeditions was Inuit owned and offered no-frills expedition cruises to rarely visited regions of the Canadian Arctic. The line was acquired by -- and merged with -- Adventure Canada in 2011.

Cruise West had been in business for 64 years when it folded in September 2010. The company, which had begun as a land tour operator in Alaska, debuted its first Alaska ocean cruise in 1958, originating the passenger cruise market in the 49th state. For many years, up until its closure, Cruise West was the largest small-ship operator in Alaska with a fleet of nine owned ships and two chartered vessels. Beyond Alaska, Cruise West also offered cruises to Costa Rica and Panama, the Sea of Cortez, the Galapagos, the Columbia and Snake rivers and even on European rivers. Ships in its fleet included Spirit of Yorktown, Spirit of '98, Spirit of Oceanus and Spirit of Alaska. In 2010, the company ran into financial problems, and after being unable to find backing or sell the company, it was forced to close its doors in September 2010.

The company was founded in 1890, though it wasn't named Delta Queen Steamboat Company until 1973. It changed hands several times throughout the years before being purchased by American Classic Voyages in 1993. When this company went out of business in 2001, Delta Queen was purchased by Delaware North Companies, Inc., and the ship went back into service in August 2002 after a short seven-month layover. The company was sold again in 2006 to Majestic America Line, but in 2008 the ship's exemption from the Safety at Sea Act expired, and the vessel was no longer permitted to operate. Both Delta Queen Steamboat Company and Majestic America Line went out of business the same year.

The company was the brainchild of Tara Russell, who, in 2013, suggested to longtime friend and Carnival Corporation CEO Arnold Donald that voluntourism could offer great potential in the cruise space. Donald agreed and persuaded Russell to take on the venture as president of Fathom, under the Carnival Corp. umbrella. It was introduce as a brand in June 2015 but didn't begin sailing until April 2016, when it set forth on its first Dominican Republic itinerary. The line's only ship spent three to four days in Amber Cove, a port located on the north coast of the Dominican Republic, from which it offered a series of voluntourism excursions. It expanded its itineraries to include Cuba the following month, becoming the first U.S.-based cruise ship to sail between the United States and Cuba in decades. Its Cuba itineraries offered cultural immersion experiences, not voluntourism. Fathom's fleet consisted of just one ship, 704-passenger Adonia, which was borrowed from sister cruise line P&O Cruises. While it operated, Fathom alternated weekly between Dominican Republic voluntourism sailings and Cuba people-to-people sailings. Due to low booking rates, Carnival Corp ceased operation of Fathom in June 2017.

One of the shortest-lived cruise lines, Haimark Line was founded in September 2014 when it secured a five-year charter of MS Saint Laurent, formerly known as Cape May Light (also called the Coastal Queen 1, Sea Voyager and Clipper Voyager). It was a sister company of Haimark Ltd., which is still in operation, offering river cruises in the Amazon and Asia. MS Saint Laurent sailed its inaugural voyage on May 30, 2015. The next month, on June 18, 2015, the ship collided with the Eisenhower Lock in New York State. It took on water, and future sailings had to be canceled. Haimark never recovered and went out of business soon after.

Carnival Corp. announced the creation of Madrid-based Iberocruceros in 2007. The Spanish-language cruise line, which started out as a joint venture with Spanish travel company Orizonia Corporacion, featured three cruise ships, two of which (Grand Mistral and Grand Voyager) came from Orizonia's fleet and one of which (Carnival Celebration) was borrowed from Carnival Cruise Line's. In May 2009, Carnival Corp. purchased Orizonia's 25 percent stake in the line, which shut down in 2014, when it was absorbed into Costa Cruises, another Carnival Corp. brand.

The direct predecessor to Celebration Cruise Line, Imperial Majesty Cruise Line operated two- and three-night party cruises between Port Everglades and Nassau from 1999 to 2009. Its first cruise ship, OceanBreeze, was replaced in 2003 by Regal Empress. A week after Imperial Majesty ceased operations in 2009, the route was taken over by Celebration Cruise Line, which was owned by the same parent company. All crew and provisions were moved from Regal Empress to Bahamas Celebration.

This Norwegian cruise line operated between 1992 and 1997 as an upscale brand for Dolphin Cruise Line. The line's first ship was Royal Majesty, which ran aground near Nantucket Island in 1995. A second ship, Crown Majesty, was added to the fleet in 1997. Both ships were passed to Norwegian Caribbean Line (later called Norwegian Cruise Line) that same year, and the company ceased operations.

Australian-owned Orion Expedition Cruises was founded in 2004 by businesswoman Sarina Bratton and began operations in March 2005. Its namesake ship was MV Orion, from which it operated Australia-based expedition cruises mostly to Papua New Guinea, the Solomon Islands and along Australia's Western Kimberley coast, but it also went as far afield as the Antarctic. Orion added a second ship, Orion II, in May 2011 after a $19 million refurbishment. The line returned the ship to its owner in mid-November 2012 after several incidents that included a grounding in Borneo. A year later, in 2013, Lindblad Expeditions purchased the company, renaming the ship National Geographic Orion.

Founded in 1968 as a freighter company, Peter Deilmann introduced its first two oceangoing ships, MS Regina Maris and MS Berlin, in 1980. Two years later, Regina Maris left the fleet, and in 1987 the company launched its river fleet, making a name for itself by designing and building river ships that reflected the style and amenities of oceangoing cruise ships. Its river fleet included, among others, Danube Princess, Prussian Princess, Princesse de Provence and Mozart. The river fleet continued to be built up in the later 1990s, both with brand-new boats and a number of "nearly new" ones bought from competitors. It was ranked in the top 10 of small-ship cruises for seven years in a row by readers of Conde Nast Traveler from 2000 to 2006. The 1990s also brought expansion to the oceangoing fleet with sailing vessel Lili Marleen in 1994 and then, in 1998, 513-passenger Deutschland. Far larger than the company's previous ocean ships, Deutschland was also the first one to be marketed outside the German-speaking countries. Owner, Peter Deilmann, died in 2003 but the company continued to be run by his daughters until 2010 when it was forced to shut down its river cruise division due to financial difficulties. It's ocean-going division shut down in 2015.

Founded in 1989, Renaissance Cruises is, perhaps, most famous for its R-class ships, which can still be found in cruise fleets throughout the world, including Princess, Oceania and Azamara. The almost identical ships had alphanumeric names (R1, R2, R3, etc). Originally run by a Norwegian company, Renaissance Cruises was purchased by Edward Rudner (the founder of Alamo Car Rental) during the 90s. It ceased operations on September 25, 2001.

Related: What Are R-Class Cruise Ships?

Swan Hellenic has been around since 1954, when two British brothers named Swan began chartering ships to operate port-intensive cultural cruises for the British market. Their itineraries focused mainly on Greece -- hence the name Swan Hellenic -- but also included ports throughout the Eastern Mediterranean. The line's ship, Orpheus, proved extremely popular, and the it developed a large and loyal following, affectionately known as "Swans." In 1983, the firm was sold to P&O Cruises but was kept separate and maintained its singular identity. Then, in 1996, Swan Hellenic chartered an unfinished Ukrainian spy ship and turned it into the 12,500-ton, full-time cruise ship Minerva. By 2003, Carnival Corporation owned P&O Cruises and, therefore, Swan Hellenic. In that year, the former R-8 of Renaissance Cruises replaced Minerva I and became 30,277-ton Minerva II, with a passenger capacity nearly twice that of the original Minerva. In April 2007, Carnival Corporation pulled the plug on the one-ship Swan Hellenic operation, and the line vanished, with Minerva II going to Princess Cruises as Royal Princess. Shortly after, Lord Jeffrey Sterling, who had been chairman of P&O, bought the Swan Hellenic name, sold it to All Leisure and resumed Swan Hellenic's operations in May 2008 with himself as Chairman. A series of geopolitical events and terrorist incidents in Europe, North Africa and Turkey hit All Leisure (and, therefore, Swan Hellenic) hard, and the company went out of business in 2017.

The New York-based company was founded in 1959, as Classical Cruises, around the premise of offering voyages to off-the-beaten-path destinations of historic and cultural importance. At its height, it had six small ships in its fleet, including Corinthian, Arethusa, Artemis, Pegasus and Road to Mandalay. In December 2014, Ponant Cruises acquired part of the assets of Travel Dynamics International, which then ceased to exist as a company.

Launched in 2010, one-ship line Voyages to Antiquity was the latest effort from cruise entrepreneur Gerry Herrod, who headed up Ocean Cruise Line, Orient Lines and Discovery Cruises. The line had just one ship, Aegean Odyssey sailing a variety of Mediterranean cruises and targeted U.K., U.S., Canadian and Australian passengers. The cruise line went out of business in 2019 after Aegean Odyssey suffered engine failure and forced the line to cancel many of its 2019 cruises.