You may also like
Dismiss
How Wind and Water Levels Could Ruin Your River Cruise
5 Tips for Texas Cruises
Avalon vs. Viking
Viking River Cruise vs. Viking Ocean Cruise
Embarkation in Whittier (Anchorage): Cruise Terminal Parking, Address and Amenities
Viking River Cruises vs. Grand Circle Cruise Line
How to Prepare for a Snorkel and Dive Cruise
Best Water Sports Gear You Can Bring on Your Sun and Fun Cruise
Best Point-and-Shoot Cameras to Take on a Cruise
Best Travel Binoculars for an Alaska Cruise 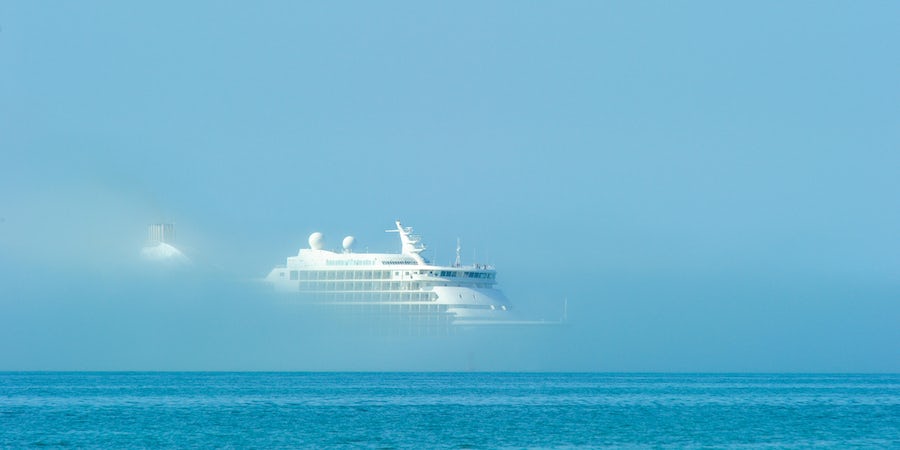 Cruise Ships and Fog: What You Need to Know

Cruise ship emerging from the fog in Key West. (Photo: HeliHead/Shutterstock)
Cruise Critic
Staff
Everyone knows that hurricanes and floods can affect a cruise ship itinerary or sailing. But there's one often overlooked meteorological event that can also put a damper on your cruise: fog.

Everyone knows that hurricanes and floods can affect a cruise ship itinerary or sailing. But there's one often overlooked meteorological event that can also put a damper on your cruise: fog.

Gray soupy clouds have impacted mariners since the beginning of sea travel. Even as ships have become more sophisticated with state-of-the-art navigation systems, low visibility is still an issue for cruise ships at times; fog, in particular, is unpredictable and known for disrupting turnaround days.

In an effort to clear things up, here are Cruise Critic's answers to some of the biggest questions surrounding fog and cruising.

Which ports suffer from fog issues?

Galveston is the most infamous cruise port for fog delays. Other cruise ports along the Gulf Coast, including Mobile and Tampa, have been known to disappear into the haze and impact cruise turnarounds. San Francisco is often foggy, although it's more likely to impact your flight than your ship. Low-lying clouds can halt port stops to Gaspe on the Saint Lawrence River. Otherwise, fog can impede visibility in Glacier Bay, Alaska, as well as the fjords in Norway -- making a scenic sail far less scenic. In Europe, fog can cover the Venice lagoon, impacting cruises there.

Who decides when the fog makes it unsafe to berth?

When docking in Galveston, cruise ships are legally obligated to board at least one pilot, ostensibly an expert in local maritime navigation, who will see the ship into berth. If the pilots deem the berthing conditions unsafe, they will "close the bar," which means they won't board the cruise ship. No pilot, no berthing.

The lines trust the pilots' expertise. While closing a port is technically a U.S. Coast Guard decision, when pilots determine conditions are not suitable for safe navigation, the port can be intermittently shuttered.

Related: Amazon River Cruise Safety: What You Need to Know

Yes, but there's a big difference between sailing through open waters and pulling into a congested port channel. In Galveston, in particular, the width of the channel provides limited space to maneuver.

While foggy conditions may make it too dangerous for berthing, cruise ships can generally navigate in low visibility by relying on a bevy of sophisticated equipment, including radar and electronic charting systems. It's something akin to flying by instrument. In open waters, that's done frequently, though the captain will reduce speed for safety reasons when a ship is sailing through heavy fog.

What can passengers expect when fog prevents a cruise from reaching or leaving a port?

It's a dicey situation. On the one hand, the ship may only have a short window of a few hours when the fog clears to get out of port -- so cruise lines want passengers on standby. On the other hand, if fog sparks a delay, the line has to make an effort to keep passengers from arriving at port too early.

Logistically speaking, the lines need space between the end of one cruise and the start of the next. Often a line will announce through its website or social media not to come to the port until the ship is ready for boarding.

If you're on a ship that can't come in because of fog, you risk missing your flight. That's why it's always better to book an afternoon flight home instead of a morning one, particularly if you are leaving from a notoriously foggy homeport.

Determining when the fog will lift is a wait-and-see game, although the lines keep a close eye on the forecasts. There are seasonal variations, however. In Galveston's case, the sea fog forms due to the difference between the air and water temperatures and the port is most vulnerable in the spring, when the water temperature is in the 40s and the air temps hit the high 70s or low 80s.