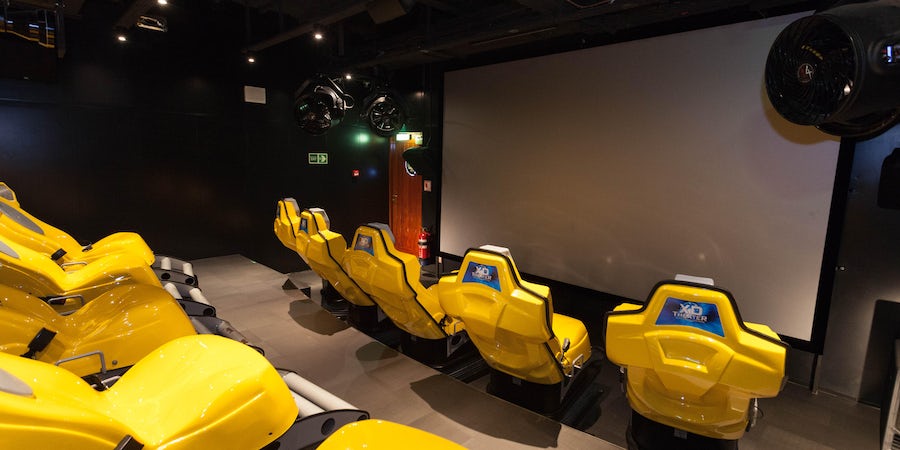 While some ships have movies under the stars, MSC Splendida takes cinemagoers to a new viewing dimension with its 4D cinema, which is part of the Virtual World entertainment complex located near the top of the ship on Deck 16.

A cross between a cinema and a rollercoaster (without ever leaving the ground), the experience features 3D graphics, moving seats to provide viewers with a thrilling 'ride' combining sight, sound, motion and special effects such as wind and rain. There are six films and passengers choose which one they want to see before the go in. The titles are: "Haunted Mine," "Cosmic Race," "Cosmic Coaster," "Rats Race," "Jett and Jin" and "Robots of Mars."

The sun might be shining outside, in the middle of the Mediterranean, but we're careering down a gold mine shaft in an out-of-control wooden mine cart. Actually, we're strapped into one of the cinema's bright yellow seats wearing a pair of 3D glasses, although it really does feel as if we're tumbling down the mine.

Related: Ovation of the Seas: What Can I do for Free?

The "Haunted Mine" name is a slight misnomer, as the only ghostly part is the spectre of an old mine worker who appears on screen at the start and finish. Warning that there is a storm brewing outside, he sends us on our way with a cackle of laughter.

What ensues is a fun, exciting 'ride' that replicates the feeling of a rollercoaster. One minute our cart is creaking slowly up a rickety wooden railing, the next it's plummeting down the other side. As the track twists and turns our seat tilts, shakes and moves. At one point the track runs out completely and a feeling of weightlessness ensues as we're catapulted into the dark mine before crashing onto another piece of track. A cold wind adds to the sensation of travelling at speed.

Bats swoop overheard as the cart continues on its journey, smashing through doors on the way. At one stage a giant "Indiana Jones"-style giant boulder is blocking the track ahead, and we feel as if we're grinding to a sudden halt before being shunted backwards, with the rolling ball in hot pursuit.

At the bottom of the mine we travel over a lake of bubbling gold ore, before our bone-shaking journey ascends and descends more steep sections of track before finally emerging into a shaft of daylight at the mine entrance -- where the ghostly miner awaits.

Definitely! It provides all the exhilaration of a white-knuckle ride without the scare factor of scaling real heights. It's a novel, all-weather attraction and suitable for all ages, providing children are big enough to sit upright. Lasting five minutes, it is also pretty good value for money.

Passengers that suffer from motion sickness should give it a miss; although you’re not actually going anywhere your eyes and brain fool you into thinking you are on a rollercoaster ride. The seats are hard and the movements can be quite rapid and bumpy, so the ride is also unsuitable if you are pregnant, suffer back or neck problems, have a heart condition or have a pacemaker.

If you are going in a group or with family members then you need to make a collective decision on which film you want to see. It's not a big issue if you can't agree, as the operator screens the films depending on what the audience wants to see. So some can go in and watch their preferred film while the remainder wait their turn outside.

Related: 20 Cruise Movies That Will Make You Want to Sail