You may also like
Dismiss
Cruise Line Gratuities: What's the Point? Cruise Tipping and Salaries Dissected
Tipping on Ships: An Australian Culture Clash
What to Expect on a Cruise: Tipping Crewmembers on a Cruise
How Not to Be Rude on a Cruise: 10 Ways to Make the Crew Love You
Q&A: Carnival Legend Hotel Director, Erik Speekenbrink
How Much Should I Tip My Room Steward on a Cruise?
23 Things Cruisers Love to Complain About
Carnival Cruise FAQ
Princess Cruises FAQ
Weaving 'Herstory': Q&A With the History-Making International Women's Day Cruise's Female Officers on Celebrity Edge 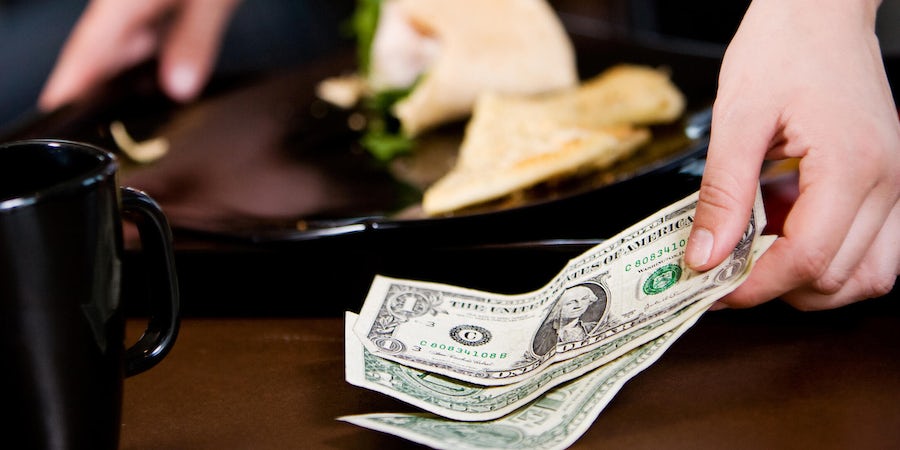 Can You Remove Prepaid Gratuities On a Cruise? Should You?

In a bygone era, passengers would tip on cruises to show their appreciation for crew members who went above and beyond the call of duty. Nowadays, cruise gratuities are added automatically to your cruise bill or even built into the cruise fare.

Prepaid gratuities on most non-luxury cruises range upwards of $20 per person, per day. The lump sum is added to passengers’ onboard accounts, and can vary depending on the type of cabin in which guests are booked. Several luxury cruise lines just include the gratuities in the cruise fare, smoothing over any possible issues.

Most lines allow passengers to adjust or remove automatic tips by visiting the front desk. The exception? Norwegian Cruise Lines, who requires cruisers to file a reimbursement request after the cruise ends.

But just because you can remove gratuities doesn't mean you should. Below, we explore the pros and cons of tipping versus not tipping on a cruise, and consider times when passengers may or may not think about removing cruise auto-gratuities.

It's rare that all areas of onboard service are lacking, but it's certainly not out of the question. If you notice a problem that makes you think twice about tipping, be sure to speak with someone at the front desk who can try to resolve your issue before removing tips becomes necessary. If you truly feel as though the crew has performed below an acceptable standard, you reserve the right to ask for a refund of the amount charged to your account for tips or to decrease it as you see fit.

What Cruise Critic Messageboard Members Say: "I withdrew the standard tip on a recent cruise due to horrible service. All I asked is that the restaurant where the horrible service occurred would not receive the tip and even asked that they reassign that tip to the cabin stewards. It was a point of principle. We were told no and we had to withdraw all. We did this but tipped individually the appropriate people as advised by guest relations and indeed to excess." --Pavovsky

2. You Prefer to Recognize Specific Individuals for a Job Well Done

With auto-gratuities, tips are pooled, and a portion goes to each person who helps to make your sailing special -- even those behind-the-scenes folks (laundry staff, cooks, etc.) you never get to meet in person. If you feel strongly that you'd rather recognize your room steward or waiter individually for stellar service, feel free to do it the old-school way -- by presenting him or her with an envelope full of cash.

What Cruise Critic Messageboard Members Say: "I prefer the personal exchange of handing a nicely filled envelope to those who have served me well." --Mamabean

3. You Don't Agree With or Aren't Accustomed to Mandatory Tipping on Cruises

Cruise gratuities, specifically prepaid gratuities, is a hotly debated topic, and no article about it would be complete without a mention of those who feel gratuities are supposed to be extra, rather than implied. In some countries and cultures, gratuities are neither the norm, nor are they expected. Even in America, where tipping is second nature, some people resent being forced to pay a daily charge for services that might be considered the standard duties of one's job.

To avoid issues, some lines that cater to passengers in regions where tipping isn't customary -- the U.K. and Australia, for example -- simply roll any such service charges into the overall cruise fares. However, most cruise lines are based in the U.S., where the crew members' pay structure is based on tips.

If you refuse to tip on principle, you are impacting the salaries of the people who have served you well onboard.

This one's a given. If you loved your sailing and feel the crew did a superb job, leave your tips as they are. (You might even want to give an extra tip to specific crew members who served you well.) Even if you had a minor grumble here or there, or you had a negative experience with a particular employee, seriously consider whether it warrants removing your tips altogether.

Keep in mind that if you pull your tips because of one rude member of the staff, the whole group is affected.

Related: How Not to Be Rude on a Cruise: 10 Ways to Make the Crew Love You

What Cruise Critic Messageboard Members Say: "I have been fortunate enough to have excellent service ... any time I have had an issue, it was resolved quickly enough to not affect my tip." --Familyguy1010

During a galley tour, Cruise Critic member Wennfred saw a list of all passengers who opted out of auto-gratuities posted in a prominent locale. We've been assured by various cruise lines that crew members aren't told which passengers have removed their auto-gratuities until after the sailing has ended, but we understand the concern that quality of service could suffer if crew members did find out.

If you're worried about this but still wish to remove auto-gratuities in favor of tipping in person via envelope, let your room steward and waiter know up front that that's what you'll be doing, so no misunderstandings arise.

What Cruise Critic Messageboard Members Say: "Been on the one Thomson cruise with tips included and it's some of the best service we had. Had some terrible service on a cruise where tips were not included. I'm not convinced removing auto-gratuities would see a drop in service standards. Poor staff are poor staff regardless in my opinion." --yorkyred

3. You Want to Tip in the Most Convenient Way Possible on Your Cruise

If you plan to remove tips from your onboard bill, you will need to plan in advance to bring enough cash for personal tipping, then wait in a potentially long line at the guest services desk to remove the auto-gratuities and chase down all the crew members you wish to thank on the last evening. Determine whether the hassle is worth doing things your way. Automatic tipping takes all the work out of rewarding shipboard staff.

What Cruise Critic Messageboard Members Say: In a poll taken on Cruise Critic's message boards about auto-gratuities, 52 percent of more than 3,700 respondents said they appreciate the convenience of auto-tipping on a cruise.