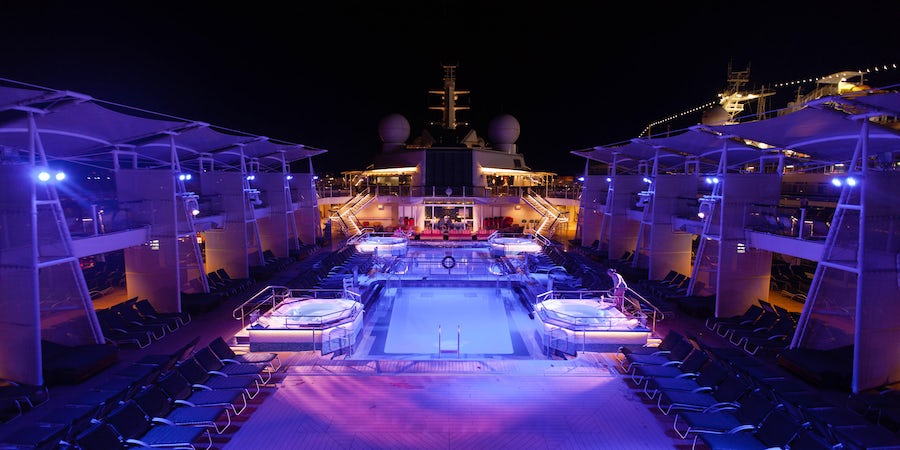 Celebrity Eclipse and Celebrity Silhouette are both part of the Celebrity Cruises' popular Solstice-class of ships. Eclipse is a little older (2010 vs 2011), but apart from that, they are, on first glance, very similar.

On closer look, there are a number of differences between the two, especially since Silhouette's multi-million pound "revolution" in early 2020, which saw the ship gain a number of new features and spaces that debuted on Celebrity Edge.

We pitted Celebrity Eclipse vs. Celebrity Silhouette to find out the differences between the two cruise ships.

Celebrity Silhouette launched a year later, in July 2011, and is slightly bigger, coming in at 400 tons more, and longer -- by six feet. It carries 2,995 passengers across 16 decks.

Celebrity makes great store of dining onboard and you'll find all the old favourites -- Murano, Qsine and Tuscan Grille, as well as the suites-passengers-only restaurant, Luminae; and for AquaClass passengers, Blu; as well as Sushi on 5 onboard both ships.

However, there are two additional dining spots on Silhouette, both of which are located on the top deck.

The Lawn Club Grill replaces the glass show demo space. The 58-seat, for-fee venue is in a beautiful spot overlooking the lawn, with sliding glass doors. The restaurant combines a cooking class, an open grill and pizzeria, where passengers -- under guidance from a Celebrity chef -- choose the meat, prepare it and cook it. (If you don't want to do your own grilling, the chefs will cook for you.) You can even learn how to make a pizza. It's not cheap at $45 per person, but on a warm evening it can't be beaten.

Nearby you'll find The Porch, which is modelled after a private backyard deck you might find in the Hamptons and also overlooks the Lawn. It's open for lunch and dinner only and offers an exclusively seafood menu for a fee of $35 per person. The signature Seafood Tower carries an additional $5 fee.

Most of the bars and drinking venues are the same across both ships, with a few differences.

Gastro Bar forms part of the Passport Bar, found on both ships, and in reality is a well-stocked fridge of craft beers. You'll also find a beer menu, and a sommelier. The Gastro Bar also offers food for an extra cost, such as small plates of cold cuts and larger plates of items like beer-battered cod and chips, which you can wash down with one of the 45 different beers.

Silhouette has two bars not found on Eclipse: Craft Social and the Entertainment Court Bar.

Craft Social is a bit like an upmarket sports bar, with more than 50 different types of beer available, comfort food like wings and sliders available, large screens showing games and a foosball table. It's in a fun spot on the main atrium and popular throughout the day.

Celebrity Eclipse has one bar not found on Silhouette. Cellar Masters, which was replaced by Craft Social on Silhouette, is a dark wood-panelled wine bar, where you can sample interesting varietals from Celebrity's extensive collection.

The key differentiator between Celebrity Silhouette and Eclipse is the former underwent an "Edgification" in early 2020. In other words, some of the more successful features of the line's newest Edge Class have been added to Silhouette, but not to Eclipse.

The Retreat Lounge replaces Michael's Club, which can also still be found on Eclipse. It is in the same space on Deck 5, but was completely remodelled to reflect a more modern look and feel.

On Eclipse, the central area of the top-deck grass lawn is a public space, beloved by sun worshippers, families with small children and croquet players. It's also home to a hot glass activity centre, which on select sailings offers demos and gives passengers the ability to sign up and make their own glass art pieces for a fee.

On Silhouette, this section has been given over to the Lawn Club Grill (see Dining above), and the public area in front has been turned into a for-fee area, with eight expensive "alcoves" (private cabana rentals), which passengers hire for the day. The installation of a large TV screen gives the space a tiny egalitarian aspect, as does the fact that the Alcoves are rarely used.

Silhouette's 2020 refurb also saw the removal of the two strips of grass either side, replaced by decking and furniture as an extension of the Sunset Bar.

One of the biggest differences you will notice between Silhouette and Eclipse is that the iLounge is a dedicated learning centre on Eclipse but a tiny concession on Silhouette. Although there are still tutorials delivered by "geniuses", they are less frequent.

Another small but significant difference between the two ships is the Concierge and Captain's Club on Deck 5, which is unique to Silhouette (though there are plans to roll it out onto other Solstice-class ships). Despite the fancy title, this space is open to everyone, regardless of cabin grade or tier status. It's effectively a fancy Guest Relations space, in which passengers who may have more complicated requests than "Can I take off tips?" have a chance to sit down and talk through their needs with an officer in a less pressured environment.