You may also like
Dismiss
Costa Concordia: A Timeline of Events
12 Bad Decisions That Could Ruin Your Cruise
Hidden in the Fine Print: 16 Things You Need to Know About Your Cruise Contract
Costa Cruises History
Cruising with Jane McDonald
How Much Should I Tip My Room Steward on a Cruise?
7 Easy Things You Can Do to Help the Environment When You Cruise
Why You Should Buy 'Cancel for Any Reason' Insurance for Your Cruise
Your Favorite Cruise Ship is For Sale? Here's Why You Shouldn't Panic
Step By Step: How to Submit Comments on Cruise to the CDC 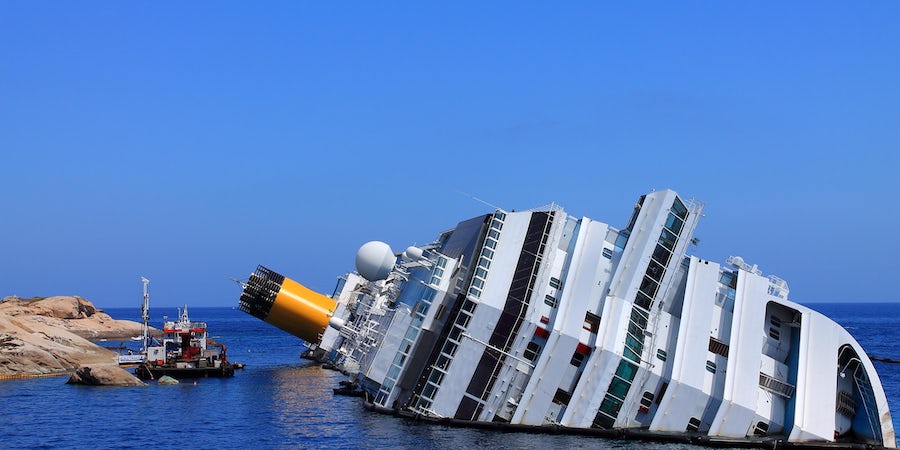 Costa Concordia: What You Need to Know

On January 13, 2012, Costa Concordia hit a rock off the coast of Giglio, an island on Italy's Tuscan coast. Several hours later, the ship capsized, claiming the lives of 32 passengers. Thanks to an amazing feat of modern engineering, the ship was pulled upright and hauled away to Genoa to be scrapped. Check out Cruise Critic's archives for our full coverage of the Costa Concordia sinking.

The unthinkable had happened. A modern mega-ship slammed into a rock then began to sink on the evening of Friday the 13th. Read our report from the first days after the tragedy.

Costa Concordia Q&A: What You Need to Know

The accident has been called one of the worst cruise ship disasters in modern times. Read answers to the most-asked questions about the incident.

Photos From the Disaster

See photos of Costa Concordia in the first days after it capsized and sank, as well as the survivors taking in the scene from Giglio, Italy.

Nothing puts this tragedy into better context than the words from those who've survived it. We received this note from a member on January 14, after she escaped the Costa Concordia sinking.

Related: 10 Fun Cruise Ship Facts That Might Surprise You

Several first-hand accounts, gathered from various news sources, describe the events surrounding the capsizing of Costa Concordia and its aftermath.

Photos From the Salvage

In an incredible feat of engineering, the capsized Costa Concordia, which had been listing on its side, was pulled upright in a procedure known as parbuckling. Cruise Critic was on hand to capture the moment as the ship returned to vertical.

Photos From the Refloat

Once Costa Concordia was upright, it needed to be raised up out of the water and refloated to be towed to a scrapyard. See photos the ship as its submerged decks rise out of the sea.

Timeline of Events: A Look Back at the Year After Costa Concordia

Confused about what happened and when? Check out our timeline of events.

Read more about the trial of the Costa Concordia captain who helmed the ill-fated voyage and was roundly criticized for his handling of the incident.

Several lines have changed their safety policies since the Concordia tragedy occurred. Read all about the changes.

In Her Own Words: Victim Struggles With Memories, Questions

A Concordia victim talks about how the sinking affected the lives of her and her family during the first year after the event. Read her first-hand account.