The words "budget" and "river cruise" aren't often found in the same sentence. That's because river cruises, due to their number of fare inclusions and small size, are usually priced in the thousands of dollars, as opposed to the hundreds of dollars you'd spend on a budget ocean cruise.

That being said, there are some river cruise lines that charge less for itineraries than others. Often these lines are more a la carte with their offerings -- allowing passengers to purchase their own shore excursions, for example -- or limit included drinks. Others have older ships without the bells and whistles found on more expensive lines. And still others are either the more value-oriented version of a higher-priced cruise line or divide their fleets into segments where the older ships are cheaper.

No matter which line you're interested in, you'll pay more to travel in Europe's high season, June through August. Shoulder season can bring bargains; it's also a time when many cruise lines reduce (or cut altogether) the dreaded single supplement. When putting this list together, we looked at published high season rates for 2018 and 2019, excluding airfare and special promotions, with a cutoff point of $350 per person per night.

With all those caveats in mind, take a look at our top picks for budget river cruising. 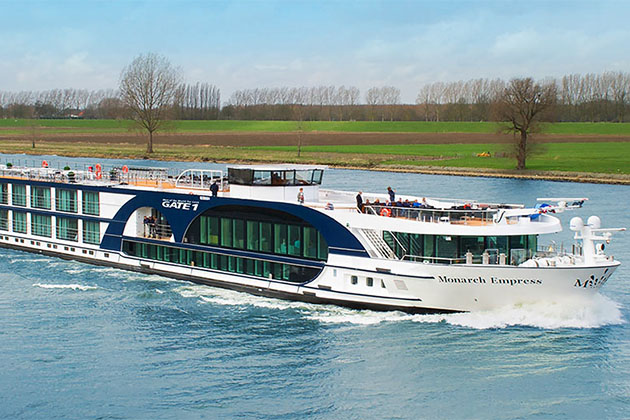 What it is: An American tour operator, Gate 1 Travel offers river cruises on ships that it owns and charters. Rivers include the Rhine, Danube, Main and Dutch Waterways; the line also sells river cruises run by third-party operators in Russia, China, Vietnam and Cambodia and Myanmar (Burma).

Average cost: While fares can vary greatly, depending on length of cruise and itinerary, a 10-night cruise on the Danube in June 2019 costs about $250 per person per night.

Inclusions: Fares include a walking or coach tour in each port, and wine, beer, soft drinks and mineral water served with dinner.

Amenities: All of Gate 1's ships have fitness centers; some also have a spa.

What to know: Most passengers are from the U.S. or Canada. 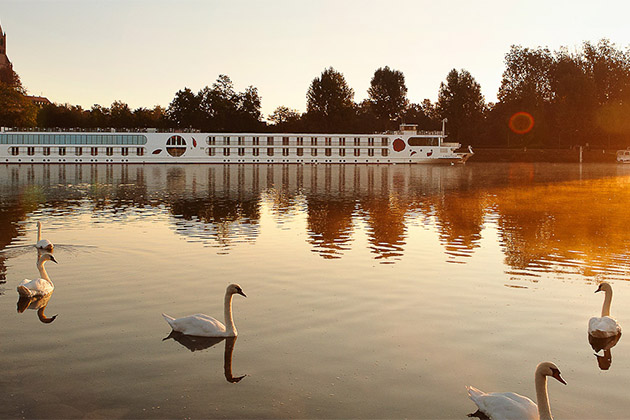 What it is: A-Rosa is a German river cruise line that has opened bookings for Americans in recent years. The line sails on the Rhine, Danube, Main and Moselle, Rhone, Saone and Seine, on distinctive ships that have red lips painted on the hull.

Average cost: While fares can vary greatly, depending on length of cruise and itinerary, a seven-night cruise on the Danube in June 2018 costs about $287 per person per night. Prices when you book are in euro.

Inclusions: An A-Rosa fare includes gratuities, all drinks (except for premium brands) and a short half-day shore excursion daily (for North American passengers only).

Amenities: A-Rosa has gyms and swimming pools on its ships, and bikes are available for hire. There's also a larger-than-average spa and sauna -- a rarity on river cruise ships.

What to know: A-Rosa has some big differences from the traditional river cruise experience. If you travel on the line as an English-speaker, you might be in the minority, although all the staff speak English. Almost all meals are buffets, with one a la carte meal in the fare. A-Rosa welcomes families, and kids under 15 travel free with parents on some sailings; some cabins have extra pulldown beds to accommodate. Overall, most cabins are 156 square feet and have fixed double beds, with few that can be pulled apart into singles. 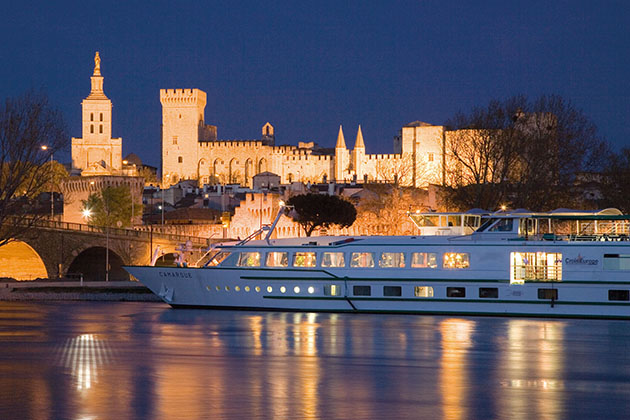 What it is: The French company CroisiEurope, one of the oldest in Europe, now markets to North Americans and other English speakers. The line is known for its diverse range of itineraries that go beyond the usual European rivers to more unusual waterways such as the Sava, the Tizsa, the Guadalquivir, the Neckar and canals in France and Germany. Croisi also has river cruises of short duration, such as four or five days on the Rhine, which allow you to combine a river sailing with a larger European vacation.

Related: Why CroisiEurope Is the River Cruise Line for You

Average cost: Croisi's newer ships are designated as "five anchor," as opposed to the older "four anchor" vessels; the higher-rated ships cost more. While fares can vary greatly, depending on length of cruise and itinerary, an eight-night Danube cruise in June 2018 on one of the line's four-anchor ships is $297 per person per night.

Amenities: These can vary, depending on the ship. Some of Croisi's newer ships have pools, but most do not.

What to know: As with A-Rosa, CroisiEurope attracts an international passenger base, and English may not be the main language of most people onboard; the line does seat English-speaking passengers together. At lunch and dinner, a three-course fixed menu of local specialties is served with only one choice for each course; special diets and vegetarian meals are available with advance notice, but you might have to ask repeatedly. Cabins on CroisiEurope vessels range from 75 square feet to 180 square feet, with the most common size being 140 square feet. 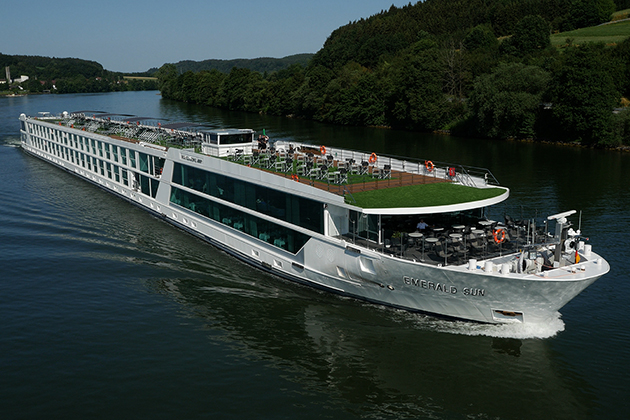 What it is: The lower-priced sister of luxury river cruise provider Scenic (which itself is the offshoot of an Australian tour company), Emerald Waterways has ships on the Rhine, Danube, Rhone, Main, Douro and Mekong.

Average cost: While fares can vary greatly, depending on length of cruise and itinerary, an eight-night cruise on the Danube for June 2019 costs about $299 per person per night.

Inclusions: For its price point, Emerald Waterways has a surprising number of inclusions, which has earned it the Cruise Critic Editors' Pick for Value several years in a row. The fare includes gratuities, at least one shore excursion in every port (with some active options) and beer and wine at lunch and dinner.

Amenities: Emerald Waterways carries a fleet of 15 bikes on all ships (except Emerald Radiance), which are complimentary to use on a first-come first-served basis. The ships also have swimming pools -- also with the exception of Emerald Radiance, which instead has a serenity pool -- with a retractable roof that converts into a movie theatre at night, as well as a small gym, massage room and hair salon.

Related: Why Emerald Waterways Is the River Cruise Line for You

What to know: Brits make up 50 percent of Emerald Waterways' passenger base -- rising to 70 percent on seven-night itineraries -- with the rest made up of North American and Australian passengers. 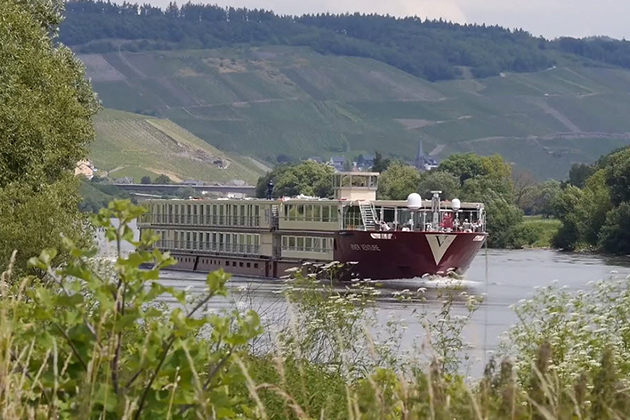 What it is: A tour company with a river cruising arm, Vantage draws passengers primarily from North America and, to a lesser extent, the U.K. The line sails on the Rhine, Danube, Moselle, Seine, Elbe, Douro, Dutch Waterways, Mekong, Yangzte, Amazon, Irrawaddy and Ganges.

Average cost: While fares can vary greatly depending on length of cruise and itinerary, a 16-night cruise on the Main and Danube in June 2019 costs about $313 per person per night.

Inclusions: A Vantage fare includes a daily shore excursion (other excursions are available for purchase) and wine and beer at dinner.

Related: 17 Cruise Lines That Include Alcohol in Your Fare

Amenities: Bikes are available for free use. Ships in Europe have small fitness rooms with a treadmill, stationary bike and free weights; the line's newest ship, River Voyager, has a massage room available for treatments.

What to know: Standard cabins are 170 square feet; on older vessels, they're 165 square feet. Vantage also has solo accommodations on each of its ships that are 125 square feet. There's also a roommate-matching program, and single supplements are often reduced. 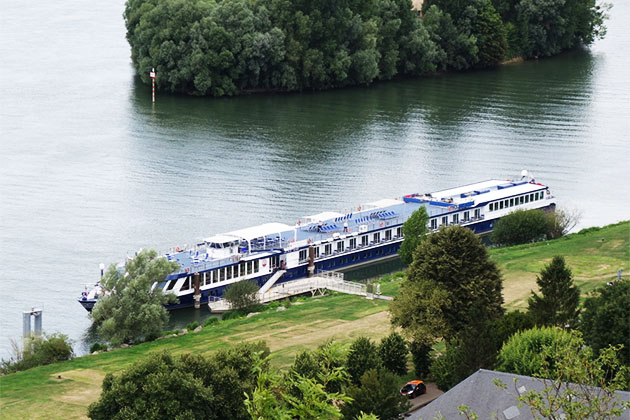 What it is: Based in Boston, Grand Circle Cruise Lines is an arm of a touring company; in general, the company caters to travelers who are 55+. The line has river cruises on the Seine, Rhone and Saone, Rhine, Danube, Main, Mosel, Elbe and Dutch Waterways.

Average cost: While fares can vary greatly, depending on length of cruise and itinerary, a 15-night cruise on the Danube in June 2018 costs about $326 per person per night.

Inclusions: Fares include two glasses of wine at dinner and most shore excursions.

Amenities: Most Grand Circle ships have small fitness rooms and a sauna or whirlpool; some boats have a massage therapist onboard.

What to know: Grand Circle's ships are older than most ships on European rivers; many cabins have single beds that can't be combined into a queen. Also, the line doesn't offer many river cruises under 12 days.