You may also like
Dismiss
Is Carnival Vista the Ship for You?
7 Reasons to Cruise Princess in Alaska
7 Things You Can Only Do on Carnival Vista
Seafood Shack on Carnival Cruise Line (Menu)
Alaska for Foodies
King Crab Fishing in Norway on a Cruise
6 Things You'll Love About Carnival Sunrise
Princess Cays vs. Half Moon Cay
Cruise Beach Bars We Miss in the Caribbean
Tracy's King Crab Shack and Juneau's Red Dog Saloon Ready to Welcome Back First Full Alaska Cruise Season 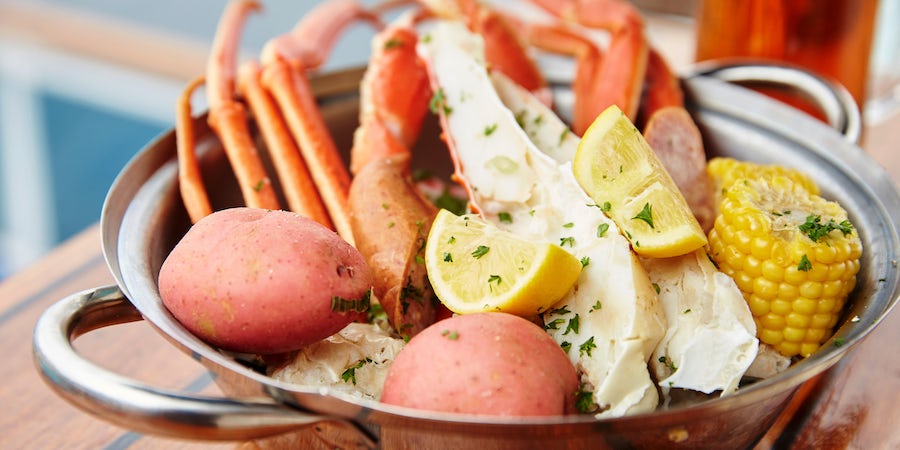 Princess Cruises' Crab Shack is a for-fee eatery first introduced in 2013 on Royal Princess. Since then, it has been added to nine other ships in the fleet, offering a casual seafood experience for passengers on select nights during each sailing. See below for all you need to know before digging in.

Hosted in a cordoned-off area of the Horizon Court buffet, the Crab Shack is casual and nondescript. Expect the type of atmosphere you'd find at a land-based crab shack, where visitors wear oversized bibs to protect their clothes and tables are covered in brown paper tablecloths and adorned with all sorts of devices for cracking shells and scraping meat. Otherwise, the space looks just like any other section of buffet seating.

Passengers dining at the Crab Shack each receive a basket of popcorn shrimp and hush puppies as an appetizer with dipping sauces, followed by a small bowl of Manhattan clam chowder. They then choose from a list of entrees that includes a “Mud Bug” boil (crawfish and corn on the cob with onions, potatoes and andouille sausage); steamed Alaska king crab legs with Old Bay peel-and-eat shrimp; a clam, mussel and shrimp pot; and a mixed steamer (snow crab, king crab, jumbo shrimp, clams, mussels and kielbasa with potatoes and corn on the cob).

Desserts vary, depending on what's available at the buffet and in the dining rooms; choices might include fruit tarts or flourless chocolate cake.

Soda and alcohol are available for a la carte purchase.

Note: On Alaska sailings, the menu is slightly different, featuring an appetizer of smoked salmon rillettes, Alaska clam and oyster chowder, and entrees that include a smoked salmon and dill mussel pot and a bacon and curry mussel pot.

this menu is a sample

The Crab Shack costs $29 per person for appetizers, soup, one main course and dessert. You can choose an additional main dish for $10 each. Soda and alcoholic beverages are also available at a la carte prices.

Princess' Crab Shack can be found on the following ships: