You may also like
Dismiss
Hate Caribbean Cruise Crowds? Avoid the Masses in Popular Ports
Coastal Cruise Tips
How to Make Friends on a Cruise
10 Things Single Parents Should Know When Cruising With Their Kids
Pictures From the Turner Classic Movies (TCM) Cruise
Best Cruise Ports for Wheelchair Users
9 Best Beaches in Puerto Rico for Cruisers
Cruise Critic Members Shout Out a Few of Their Favorite Crew
20 Photos of Our Members' Favorite Cruise Travel Memories
Cruise Beach Bars We Miss in the Caribbean 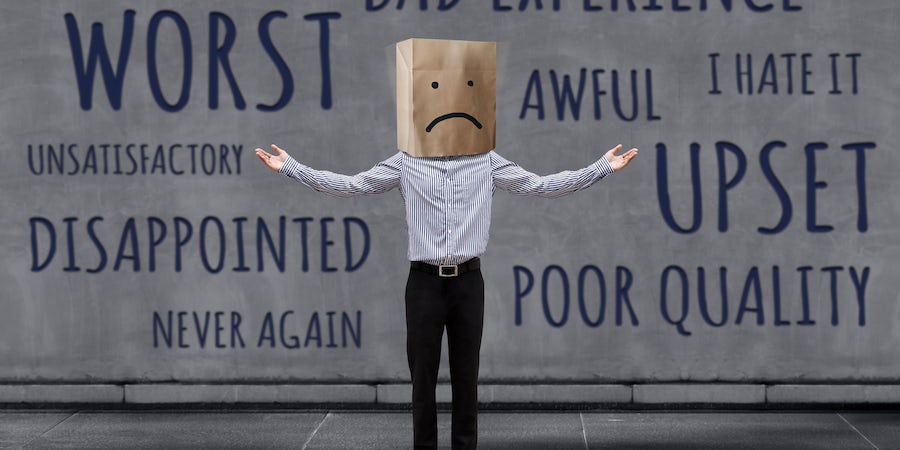 We here at Cruise Critic have heard some funny things over the years, from ridiculous complaints to questions that make us scratch our heads. Classics include things like "What time is the midnight buffet?", "If the ship has left port, can I still get on?", "Does the crew sleep onboard?" and gripes that people in foreign countries don't speak English.

Below, in no particular order, we've compiled a list of some of the silliest and most amusing cruise complaints, comments and questions from passengers.

It's amazing what some travelers don't understand about the destinations they plan to visit on a cruise.

"We were on an excursion to the beach in Belize a few years ago. There was a woman there who was complaining very loudly to everyone that there was too much sand on the beach."

Also, the water was too wet.

"A year or two ago, overheard some lady on her phone telling someone 'Well Mexico was ok, except that everyone spoke Spanish.'"

"On a cruise last year to the Canary Islands we boarded a shuttle bus at one of the stops to take us into town. Soon after leaving the dock we passed a long golden beach. A lady sitting behind me said 'Oh what a lovely beach. I didn't realize we would be so near the sea.'"

Um, that's what happens when you travel by cruise ship to an island?

Related: 10 Stupid Questions You Should Never Ask in Alaska

"In Juneau, two people asked us if the street (fairly steep hill) led to the cruise docks. (It did.) Then they asked which way! "

We're pretty sure Noah's Ark is the only ship that parks at the top of a hill, rather than down in the water.

Cruise Questions and Complaints Overheard Onboard

The realities of life onboard a cruise ship can be confusing to first-timers, leading to some funny cruise comments.

"Here's a question from a fellow passenger (first-time cruiser) we encountered. She asked us if passengers in 'outside cabins' get extra blankets to stay warm at night."

Nope. Each cabin receives one extra blanket, and the occupants are forced to fight over it as part of the nightly entertainment.

Related: 7 Reasons Why SeaDream Is the Cruise for You

"On embarkation day (yes we were still at the dock), a woman was complaining rather loudly that she had paid a lot of money for her balcony cabin, and did not want to look at the parking lot all week. She wanted to see the ocean."

If she had complained to Guest Services, they would have told her to check back after the 5 p.m. sailaway party if the problem persisted.

"We were on a ship that was rocking rather severely from a hurricane south of us, and someone asked the Captain why we were rocking so much. He replied without cracking a smile: 'Too many honeymooners onboard.'"

We hope they realized he was kidding.

Related: 9 Reasons Not to Take a Baby on a Cruise

"We were in the elevator on the AOS Adventure of the Seas when everyone was discussing the towel animals that they found in their rooms. An older lady was upset that her room steward left a 'dead chicken' hanging on a hanger in her cabin. We couldn't imagine what she was talking about until we got back to our cabin and found our towel monkey!"

The next night, he left a towel horse's head in her bed…

The Joys of Dining With Non-Foodies

Eye roll all you want at food snobs, but travelers with unsophisticated palates say the darnedest things.

"One night at dinner, hubby and I ordered tuna tartar as our appetizer. Our table mates must have thought that sounded good, so they ordered it too. Appetizers came, and we waded into ours. Then we heard one of our table mates say to the other, 'This tuna's raw!' The other one replied, 'And where's the tartar sauce?'"

Related: Where Can I Find Locations From "The Guernsey Literary & Potato Peel Pie Society" on a Cruise Ship Excursion?

"One time at a steakhouse, I ordered the beefsteak with fresh mozzarella and was asked if I knew what I was ordering. I guess I gave the waiter one of those looks because he said sorry but the night before a woman ordered one then when he brought her the dish, she complained to the manager that she ordered beefsteak and she wasn't served a steak."

To be fair, "beefsteak" is a strange name for a tomato.

"On the NCL Spirit last summer, waiting in the poolside BBQ line, the guy in front of me looks down at the sizeable and yummy-looking ribs and asks the server, 'Are those beef ribs or chicken?'"

Chicken fingers as a concept is also confusing, but we're pretty sure "chicken ribs" is not a thing.

"Overheard in the Windjammer:

Him: 'I think I'll pass on the chicken. It looks a little undercooked, and I don't want to get salmonella.'

Her: 'People don't get salmonella from chicken. They get it from salmon.'"

In that case, we'll have our eggs cooked rare, thank you.

Angry but ill-informed travelers often don't realize that their complaints are ridiculous ... and hilarious to those who overhear them.

"I am very angry with your cruise line. I incurred many expenses because your ship did not allow my husband and I sic to enter the ship together with 3 other families. We stayed behind in an island with no money or credit cards."

We do hope she scraped together enough funds to at least buy a watch during her island stay.

Related: How to Plan a Group Cruise

"I was not allowed to utilize the gym because of wearing a shoe called 'Crocs,' which the staff considered flip-flops. I had no tennis shoes available. I found no tennis shoes onboard for sale. One of the reasons I accepted this cruise with my wife was that I would be able to use the gym."

Book a cruise to use the gym. Leave your sneakers at home. What could possibly go wrong?

"They took our wine coolers and beer."

Bummer. We were pretty upset when they told us we couldn't bring our pet elephant onboard.

"We were in line at guest services behind a man who was screaming about a bill for over $2,000 on his sign and sail card. Most of the charges were from the spa for beauty treatments and massages. He said, 'No my wife never used a credit card, she only showed them her room key and they gave the services to her. My card is the one we used to charge drinks and things.'"

We've heard of similar things happening at the mall if you show your credit card to the cashier.

Related: 12 Surefire Ways to Have a Miserable Cruise

"Please be advised that the Carnival Cruise customer who traveled on this cruise found his pants. They were located at home upon arrival."

That must've been one long (and breezy) cruise.

"Overheard on a cruise in Australia. Says a passenger exploring the ship: 'Oh, gosh, there's so many crooks and nannies.'"

According to news reports we see, plenty of crooks and nannies do sail, but we think they meant to say "nooks and crannies" before those sailaway cocktails kicked in.