You may also like
Dismiss
Cruises with Celebrities: Spot Your Favorite Stars at Sea
Calling All Cosplayers: 6 Cruises for Nerds and Geeks
5 Reasons to Love Windstar in Alaska
7 Tips for Getting the Most Out of Your OceanMedallion Experience
The Smooth Jazz Cruise
'70s Rock and Romance Cruise 2022
Country Music Cruises
Pictures From the Turner Classic Movies (TCM) Cruise
Swing and Salsa Cruises and Other Dance-Themed Sailings
Pictures From the Ultimate Disco Cruise 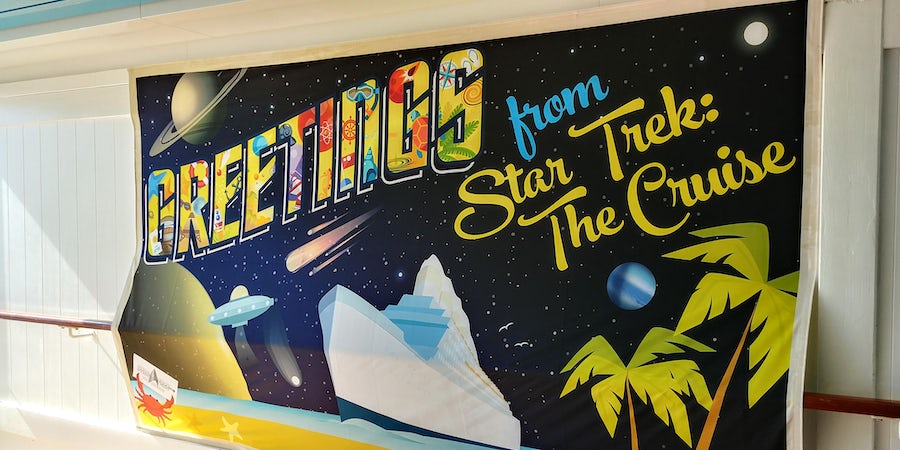 Star Trek Cruise 2022: What You Need to Know

Cruise ships. A final frontier for many Trekkies who have traveled the world attending Star Trek conventions, but not yet ventured out onto the open seas to spend time with their fellow fans and Star Trek idols. Going into its fifth year in 2022 with just one departure, the official Star Trek: The Cruise sailing is in high demand. And for those who have yet to embark on one of these journeys, questions abound.

What's a Star Trek cruise like? What do the activities involve? Is everyone dressed like a Klingon? What's included in the price and what costs extra? What should you pack if you're going?

Cruise Critic did a little digging (including venturing onto two sailings) to find out everything there is to know about a Star Trek cruise. Here's our guide to helping you make it so. 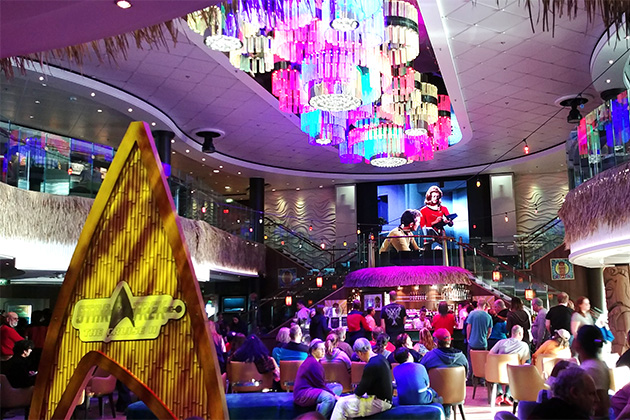 Related: What Will Happen to Expedition Cruises to Antarctica In Winter 2020-2021?

Getting on a Star Trek cruise can be as difficult as winning at dabo in Quark's Bar. The 2017 sailing, the first official Star Trek cruise in several years, sold out within two months of being announced, and while subsequent sailings did not sell out or only sold out at the very last minute, the 2022 cruise is already full. The cruise is sold through a company called Entertainment Cruise Productions (which also operates theme cruises such as The 80s Cruise and The Jazz Cruise), and to book you either need to do it directly with the company or through a travel agent who has registered with the company. (It's free for agents to register, so if you've got an agent you regularly use, ask him or her to register.) You can't book directly with Royal Caribbean International. The 2022 sailing will take place on Mariner of the Seas.

Passengers on the 2020 sailing had priority access to the 2022 sailing when they were onboard.

Because the sailing is so popular and limited, you can't shop around, and there are no onboard credits or rebates to be had, however prices on some of the less desirable cabins might down as the sailing date approaches.

Which cast members will be onboard the 2022 Star Trek Cruise?

Entertainment Cruise Productions has partnered with CBS Studios, which owns the rights to the Star Trek franchise, so some of the biggest names in the Star Trek universe will be on the ship. This isn't a B-list theme cruise. In 2022, there are nearly a dozen cast members htting the high seas, including George Takei, Walter Koenig, Sonequa Martin-Green, Jonathan Frakes, Marina Sirtis and Denise Crosby.

Will I get to meet George Takei on the 2022 Star Trek Cruise?

Chances are you will get to meet some of the actors onboard, though most only briefly.

If you'd like to spend a longer period with some of the actors, you'll need to pay extra for actor-hosted excursions -- and even then you might not get to spend more than the minute it takes to get your photograph taken. (Do not book an actor-hosted excursion if you have your heart set on an actual chat with the actors; there is no time for that.)

Some actors -- those known for being more social with their fans (Picardo, de Lancie and Crosby, for example) -- might spend more time in "regular" settings mingling with people. The ship's atrium, called the Shore Leave Bar during the cruise, is one of the best places to hang out for a chance at a casual chat with any of the actors. 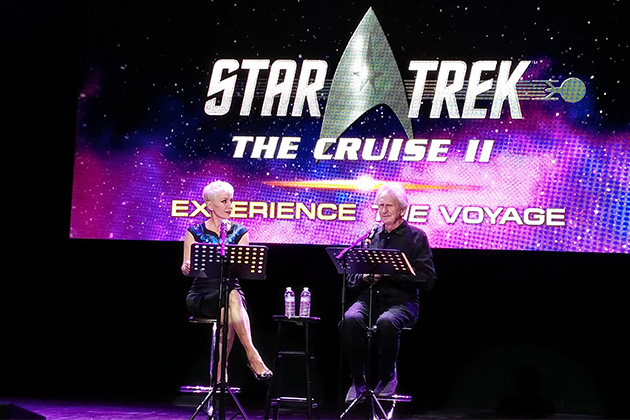 Will there be Klingon classes onboard the 2022 Star Trek Cruise?

So far none of the Star Trek cruises offered Klingon classes in the schedule of activities, but that doesn't mean you won't pick up a word or two. (Say hello to the first Klingon you see with nuqneH nook-neck or just raise a beer anywhere on the ship and call out Qapla kahplah and you'll get a round of it called back to you from every angle.)

Is my Romulan ale included in the 2022 Star Trek Cruise?

Beyond tap water, tea (hot and iced), coffee and a small selection of juices in the buffet, drinks (both soft and alcoholic) on the Star Trek cruise are not included in your cruise fare. At the T-shirt deck party (usually the first full sea day), free drinks including beer, wine and a signature Norwegian cocktail are provided so long as you're wearing your official (and freely provided) Star Trek: The Cruise T-shirt.

Other items that are not included on a Royal Caribbean ship are shore excursions, dinner in specialty restaurants, internet access, room service and crew gratuities.

What is included are your meals in the three-level Sapphire main dining room, the grab-and-go Cafe Promenade, and the Windjammer Marketplace buffet; the full schedule of Star Trek-themed activities; and poolside fun. Parents, take note: The onboard kids club is not open during the Star Trek theme sailing; nor is late-night babysitting.

Related: 11 Reasons to Take Your Family on a P&O Cruise 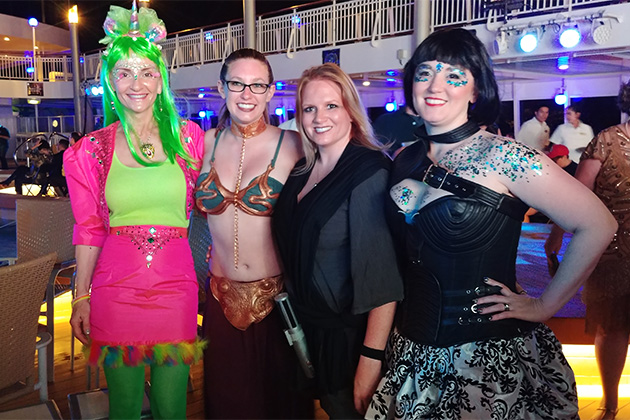 Should I bring my Vulcan ears to the 2022 Star Trek Cruise?

We doubt anyone who has sailed on past Star Trek cruises managed to do it with just a carry-on bag. With a packing list that needs to incorporate all the Star Trek dress-up opportunities, any poolside fun, dinner in the main dining rooms and shore excursions, we don't see how a carry-on suitcase would be enough.

Definitely bring your Star Trek wear! You probably don't want to dress in full Klingon attire during the day in St. Thomas (not because people will stare, but because it'll probably be too hot!), but for your evening drink in Ten Forward, you'll definitely want to bust out your best Vulcan ears and Andorian antennae, while for the Starfleet Intergalactic Gala you'll want to don your fanciest dress uniform. For the Holo Night, feel free to channel Data's Sherlock Holmes adventures or Captain Picard's Robin Hood escapade, while at Q's Masquerade Ball and Risa's Festival of the Moon Party, put on as much (or as little) as you like. (Keep the important bits covered, or you might find yourself confined to quarters.)

Related: Conducting Your Own Orchestra With Avalon Waterways

Please keep in mind, if you're flying to the cruise be careful with your bat'leth (or other "weapons"). The TSA security staff might not be Star Trek fans.